Increased Production And A Fair Price Policy: The Way Forward For Agriculture 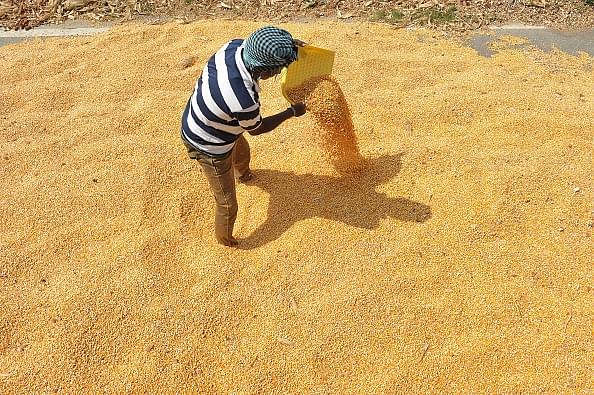 A farmer dries maize on a highway side road in Thoopran Mandal in Medak District, some 60 kilometers from Hyderabad. (NOAH SEELAM/AFP/GettyImages)

Two reports that appeared at the same time this week, draws attention to the one manna the Indian government has been missing out on. It’s about the agriculture sector and what it can do for the Indian economy. At a point when farmers across the country are repeatedly challenging the Centre to draw up policies that provide a break from the past, these two give a clear set of ideas to implement in the farm sector.

In the first one, Shweta Saini and Prof Ashok Gulati (both from the Indian Council for Research on International Economic Relations) analyse the extent of price distortion in Indian agriculture that has persisted to keep farm income low and rural distress high. The second is an article by Sajjid Chinoy, which explains how the scope for expansionist fiscal and monetary policies is going to be limited for a long time. Read together, they make the case for implementing policies that hardly draw on public finance, yet have a strong multiplier effect, rather than trying to hand out scarce public money to make the manufacturing or even services sector revive.

Last month, Swarajya carried some in depth reports on how agriculture reforms have transformed the Israeli economy. Saini and Gulati argue that it is possible for the Indian economy too to tread the same path. Their argument is that Indian agriculture suffers as much from bad policies as from lack of public investment.

The government price policy is seeking to ensure any rise in farm gate prices is dampened, though it has a good reason to aim for soft prices. It keeps food inflation low. But again, as the Saini and Gulati report shows, despite those attempts, the commodity prices have rapidly converged with international prices of these goods in every period. In other words, the government spends scarce money uselessly that hurts all segments of the economy, including both the urban consumers and the rural farmers.

At times the government does this by banning exports. As Gulati notes evocatively, “we should ban the export bans”. As this report by Harish Damodaran in the Indian Express shows, due to fluctuating rules for exports of agricultural commodities, the strongest rise of exports in recent years was instead recorded by commodities where the ban was not implemented. So while India is either the largest or second largest producer of rice, skimmed milk powder, cotton, onion, and till recently of bovine/buffalo meat in the world, the prices of these commodities in the country has dipped compared to what they should have been if they had been freely priced in the export market (export parity prices). In short, the farmers have been shortchanged. The Saini and Gulati study of 15 commodities over a 10-year cycle shows this has happened 72 per cent of the time. On another 17 per cent of the occasion, the price policy has kept them “non-tradeable” i.e. without any distinct advantage – hardly the sort of policy that should be applied to an agriculture dependent economy.

It is rather a throwback to a socialist style expropriation of agriculture to build industrial capital, popularised in the first half of twentieth century. The madness of such shortchanging would be tragic; since no Indian government courted it as a conscious policy that would push into poverty the small and marginal farmers who make up most of Indian agricultural terrain. Yet it has happened.

The full report of Saini and Gulati must be read to understand how the painstakingly researched study on each of the 15 commodities clearly makes out the case that even without investing any money, the government can do a massive service to the farmers by forswearing off export bans and other attempts to influence farm prices. Remember, before food inflation dipped to the present anaemic levels, state governments have at times used all means to bring ‘malignant’ farmers to heal including police actions.

JP Morgan’s chief India economist Sajjid Chinoy makes the hypothesis that there is no space for more borrowing by the Centre when the states have begun to borrow more to finance power loans and farm loan waivers. With exports too just recovering, the only way for the state to make the economy expand is by pushing agricultural productivity. “The real policy challenge is how to keep food inflation contained while providing a remunerative margin for farmers? The answer is well-known: increased agricultural productivity. There is no escaping this”. And the way to keep farmers interested in farming and off the roads from agitating is to ensure policy swings on farm prices are eliminated.

Read together, the two forcefully make the case for reforms in agriculture. They don't cost the earth yet provide escape velocity for farming to turn profitable.