Long Read: Are Private Corporations A Threat To India’s Farmers Under Contract Farming? 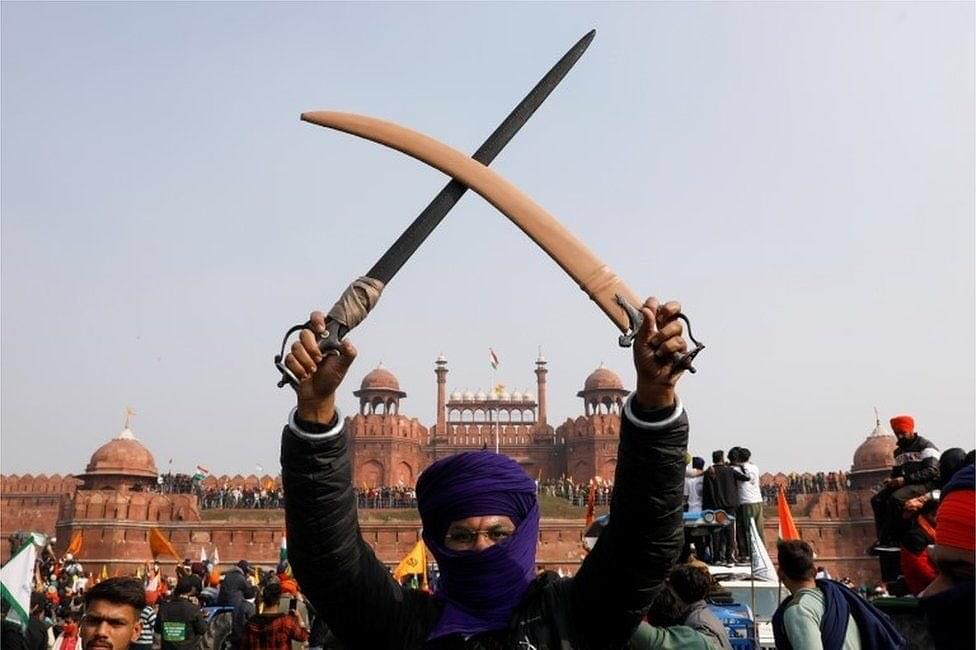 Amongst the shifting goalposts on the farm laws, what has been prevalent is the constant apprehension against the private sector.

Critics of the new farm laws have attributed the protesters’ staged misery to corporate threat to farmers’ livelihoods across India. The entire anti-corporate narrative has been fixated on the new contract farming law.

The arguments against the ‘Farmers’ Empowerment and Protection Agreement on Price Assurance and Farm Services Act’ loosely include concerns around inflation, exploitation of farmers, predatory pricing, debt-traps for rural farmers and workers, the decimation of the APMC structure, and the end of the Minimum Support Price (MSP) for farmers.

For the farmers of Punjab, however, this is not their first tryst with contract farming.

In a move to diversify the state’s cultivation pattern, an Amarinder Singh government, in 2002, introduced contract farming at a government level around 2002. The objective was to decrease the share of cropped area under wheat and paddy. In the state Economic Survey of 2019-20, the current Congress government reiterated their two-decades-old objective.

Within the Act, the state had left the implementation to Punjab Agro Foodgrains Corporation (PAFC). The PAFC, as a government body, was supposed to procure from the farmers and then trade across the country.

However, the success was short-lived, and by 2011-12, the area was reduced to 12,000 acres, and consequently, the scheme was discontinued.

Yet, the programme was disruptive for its times, given it wanted to encourage farmers to align with the supply-demand economics and enter into a contract.

For some crops, prices higher than the MSP were offered. In less than a decade, the PAFC spent Rs. 15 crore, and to tackle the labour costs and simultaneous shortage, mechanisation was also included during the sowing and harvesting period.

The 2002 contract farming law could not take-off for several reasons. Firstly, the area under the programme reduced after the SAD-BJP government took over in 2007. While the area under the PAFC was 240,000 acres in 2007-08, it got reduced to 11,971 acres in 2011-12. Secondly, the Centre did not show any interest when it came to constant financial support.

There was a need to move away from wheat and paddy since the excessive use of fertilizers and pesticides had disturbed the soil quality. However, no diversification plan was introduced. The share of cropped area in Punjab for paddy increased from 31.3 per cent in 2000-01 to 39.6 per cent in 2018-19, worsening the soil and water situation.

Post-2011-12, another attempt was made at enabling contract farming in the state. Passed in 2013, the Punjab Contract Farming Act had clauses similar to those included in the Central government’s new farm law.

However, the law was met with stiff opposition. The middlemen lobby, wanting to suppress the farmers through the informal credit business and other means of cartelisation, opposed the farmers’ direct payments. Even back then, the opposition was rooted in the argument that if direct purchase and private wholesale markets were set up, the farmers would have opted for those with direct payments facilities.

However, the Act missed many essential aspects pertaining to contract farming. There was ambiguity about the quality of produce, price determination, market fluctuations, and delivery.

The law also included mandatory registration with a local authority and had a fee. The corporations were also required to submit reports of transactions with the same local authority.

What made the law questionable was when the farmers could be jailed for not fulfilling the contract. The farmer could be imprisoned for a month with a fine between Rs. 5,000 and Rs. 500,000 or both for the farmer.

Even for legal recourse, the farmer could only reach out to the district collector, but the law never moved towards implementation.

Already existing in some form and shape in more than 20 states, the new law on contract farming will not only supersede the existing laws in the states but also simplify the entire Act giving the farmers a greater benefit of doubt and insulating them from the potential exploits of the private sector.

The new law on contract farming safeguards the farmers’ interests and supersedes the existing laws in different states.

Firstly, it creates a uniform law for the entire nation. Given the Centre’s push towards a single market for the whole country, the new contract farming law would enable easy trade between the farmers and private corporations.

Secondly, the new contract farming law has enough provisions to safeguard the lands of farmers. It does not allow any agreement which contains a clause for the transfer, sale, lease, or mortgage of the land premises.

Private corporations cannot build any permanent structure or enable any modifications on the land unless the agreement specifies that the said structure would be removed at the corporation’s cost or sponsor at termination.

No recovery of dues from the farmer can be made by selling or leasing their land.

Thirdly, the law also allows farmers to tap into formal insurance or credit instruments beyond those offered by the state and Central governments. Collaborating with private sector corporations or coming together to form one, as in the case of FPOs, would help farmers access formal banking and credit facilities.

Fourthly, the new law also takes care of price volatility, further safeguarding the farmers’ interests. For instance, if the decided price of the crop within the agreement is ‘x,’ then, in the case of the price dropping by 10 per cent during the season, the farmer would be guaranteed ‘x’ as the price for his crop.

However, if the price goes up by 10 per cent, then the farmer would be liable for a share in the profits. The claim is directly linked to a price benchmark prevailing in the APMC yard or electronic trading and transaction platform or any other relevant data point.

Fifthly, in the case of any unforeseen external event, extreme weather events like floods or drought, insect-pests, earthquakes, and other events beyond the control of the parties in agreement, no action of recovery will be initiated against the farmer.

Even in the dispute resolution mechanism, the farmer will not be jailed, as was the case with the contract farming law under the state government of Punjab in 2013.

Even if a recovery is to be made, the amount recovered will only be equal to the advance paid by the corporation or trader.

Close to 50 per cent of the produce includes livestock, fishing, and forestry.

Within the MSP crops, too, the numbers tell a different story. Merely 3.5 million wheat-growing farmers, 9.5 million paddy-growing farmers, and 7.5 million farmers growing pulses received the benefits of government procurement in the Kharif and Rabi marketing seasons of 2019-20.

In terms of percentage, the procurement impacted only 7.64 per cent of the paddy farmers and 6 per cent of the pulses growing farmers. The government estimates the total number of farmers to be around 125 million.

Digging deeper, the numbers get more interesting. For the 2019-20 cropping season, the MSP procurement was merely 26 per cent of the total market value for the 22 crops under the MSP.

For the 10 major crops procured under MSP, the entire procurement was merely 33 per cent of their total market value.

Thus, even as the MSPs and APMCs are here to stay, the number of farmers and the share of agriculture produce they cover is not even 10 per cent, and the rest is taken care of by trade with private corporations and traders —talk of much ado about nothing.

For instance, for the ongoing Kharif marketing season of 2020-21, Punjab’s share in the overall paddy procurement is almost 33 per cent, followed by 10.5 per cent from Uttar Pradesh, 9.8 per cent from Chattisgarh, and 9.3 per cent from Haryana.

The procurement trends have been sustained for years.

Thus, while Punjab’s farmers have pegged their entire agri-economy to wheat and paddy and the MSP procurement of them, the farmers across India, including Punjab with more than 90 per cent of the agricultural produce outside the MSP purview, are already working with the private sector, and the success stories are plenty.

For instance, earlier this year, when the farmer protests were at their peak, 1,100 farmers from Karnataka signed an agreement under a state contract farming act with an arm of Reliance Retail to sell close to 1,000 tonnes of paddy at Rs. 1,950 per quintal. This was more than the MSP of Rs. 1,850 being offered to the farmers.

BigBasket has also been actively working with farmers. Through their farmer connect programme, launched in 2016, the company has simplified the supply chain to ensure the quality of fresh produce.

This has helped farmers raise their incomes by 10-15 per cent.

The company, by 2019, had 30 collection centres across the country. Today, it sources 80 per cent of the fruits and vegetables directly from the farmers, thus taking the middleman out of the equation.

In 2019, Amazon was already running a pilot project in Pune to source fresh produce directly from farmers under its farm-to-fork initiative. The idea was then to sell the produce through Amazon Pantry and Amazon Fresh.

It’s not only about the big corporations. Individual farmers, for long, have reaped the fruits of crop diversification. Particularly interesting is the story of the ‘Mushroom king of Punjab’, who has an annual turnover of more than Rs. 1.25 crore. Other success stories include ITC, PepsiCo, Walmart, Appachi Cotton Company, amongst many others.

Also, the role of the private sector has only been measured from the lens of pricing and procurement. What farmers of India need is elaborate investments in technology to improve yields and soil quality.

Many startups are already working in this domain.

If one takes a look at the value chain, from farm inputs to selling, the private sector will play a key role in creating a digital marketplace for farm inputs, helping farmers with research on plant/animal life sciences and genomics, farm equipment for rent on a pay-per-use basis, for farm management by helping them with geospatial data, IoT devices, and sensors, robotics, in farm mechanisation, in modern farming techniques like indoor farming, greenhouse systems, drip irrigation, and in post-harvest produce handling through quality check and storage and transportation.

The new laws also open up employment opportunities for the middlemen working within the APMC structure.

From the government perspective, these middlemen can become the bridge between the corporations and the farmers as employees of the former, or independent contractors.

However, that would warrant taxation on their income, which is one of the many reasons for their stubborn resistance to the new laws.

Today, the farmers’ protests, rooted in the agriculture reforms, have become a battle between a rusted socialist setup and new-age capitalism.

While socialism will continue to prevail to a certain extent in the form of subsidies, waivers, MSP procurement, and so forth, it is only capitalism that can help farmers free themselves from decades of poverty.

The tantrums of a few MSP-spoiled farmers, willing to burn their agricultural future to the ground and unwilling to reform themselves, must not be passed off as a verdict on the role of private corporations in the farming sector.

The threat is not from private corporations, but from farmers intoxicated by the idea of rusted socialism and an MSP for everything that grows under the sun.