Love It Or Hate It, DeMo Changed The Rules Of The Money Game 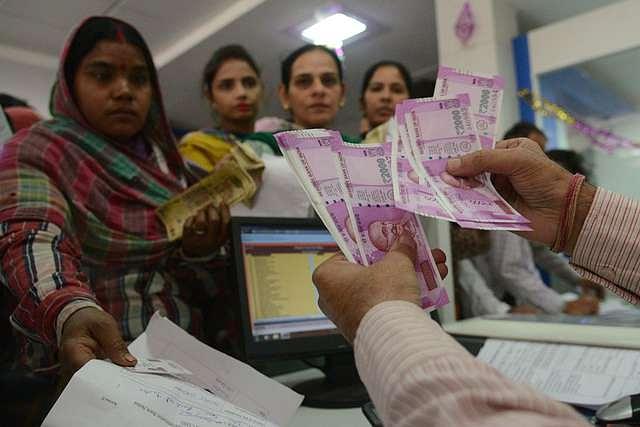 Demonetisation ... the government’s biggest move till date to eradicate corruption.

Thousands of words and air minutes will have been used up over the last few days trying to prove demonetisation (DeMo) a success or failure. The final word, unfortunately, is probably never going to be said with certainty. For the simple reason that everyone uses his or her own yardstick and bias to make a judgment call. Moreover, with the goods and services tax (GST) following DeMo in short measure, we can never know whether the downturn attributed to the sudden withdrawal of the old Rs 500 and Rs 1,000 notes on 8 November had a longer negative effect than presumed. We can’t now easily apportion the blame for the recent low Gross Domestic Product (GDP) print of 5.7 per cent in the June quarter between DeMo and GST.

But the one thing that can be said about DeMo is that it woke everyone up. Nothing else would have announced to the world with such finality that black money isn’t kosher. Not least to Indians who have, so far, had a wink-and-a-nod relationship with the colour of the money they use. The primary success of DeMo is thus in the shock value itself, not its aftermath.

But we can’t run away from more nuanced judgments, and so here’s an attempt to weigh the pros and cons in as neutral a fashion as possible.

First, let’s be clear. The short-term impact has been negative. We have seen GDP growth down to 5.7 per cent in the quarter ending June, and CMIE estimates that 1.5 million jobs could have been lost due to DeMo in the January-April period. But this short-term assessment must be balanced by two facts: the downtrend began well before DeMo, and in June industry was destocking due to the oncoming implementation of GST from 1 July. The two shocks telescoped into one another, making it difficult to say the downturn was all DeMo’s doing.

Second, DeMo impacted citizen psychology in two ways – one positive, one negative. When cash turned scarce in the first four months of DeMo, the average Indian’s psychology of shortage was triggered. Thus, consumers chose to save rather than spend, since there was concern that things may get worse. And even when cash returned, the normal Indian tendency to hoard cash easily returned. Indians have probably restocked on cash, thus making it seem that cash is still king. However, on the positive side, it is clear that a subtle message has gone through: using less cash is a sign of a clear conscience on the colour of your money. Today, when anyone asks for cash for higher-value transactions, we know what it is for. Another positive: when we hoard cash, the savings rate goes up and pushes interest yields down. This has had the upside of routing financial savings to financial assets, including stocks. What India lost in terms of GDP, it has gained in terms of asset values.

Third, politically, DeMo benefited the Modi government, since citizens (and voters in UP, especially) saw it as an honest effort to attack big black money holders. This is why despite huge personal inconvenience and loss of incomes and business opportunities, DeMo was largely accepted as necessary. But one year down the line, as the economy still struggles to revive, people may be reassessing their earlier willingness to take the intent behind DeMo at face value. We will get an inkling about that in the Gujarat elections, where DeMo and GST have had the maximum impact.

Fourth, it is also clear that DeMo failed in its short-term political-economy objective of trapping black money. Since 99 percent of the currency outstanding came back to the banking system, there was no easy bonanza available to the government by cancelling the legal status of the demonetised currency and seeking a fat dividend from the Reserve Bank as its liabilities came down. Figures of Rs 2-3 lakh crore being trapped outside banks proved to be a pipe dream. But, on the upside, the chances are no one will trust cash all that much as a store of black wealth. Belief in cash has taken a knock, not so much in terms of everyday transactions, but as a commodity hoardable in sackfuls.

Fifth, it is possible to claim two medium to long-term benefits from DeMo – a broader tax base, and a faster shift to digital cash. There is some evidence that both these aims will prove right. The government claimed that more taxpayers are now filing returns, and advance tax collections for fiscal 2017-18 also look encouraging. But the scale of increase in both cases is not that significant for the taxmen to do cartwheels. The reality is that even GST could have caused a direct tax spike, since small businesses that report higher sales will also have to report higher incomes. So the rise in direct taxes may also be linked to a spike in higher reported sales and GST payments.

Sixth, perhaps the biggest success of DeMo will be in the greater digitisation of the economy. While skeptics abound on whether the shift to non-cash payments is permanent, now that cash is no longer in short supply, the ground reality has changed post-DeMo, post-GST. The “nudge” provided by cash shortage was one thing, but post-DeMo banks are feverishly moving to digital platforms with a vengeance, giving lower priority to branches and ATMs in future. With the unified payments interface (UPI, including the Bhim app) now about to get a steroid boost and scan-and-pay systems to be made interoperable a few months down the line, payment systems will digitise faster than ever. GST will make formal businesses less willing to pay or accept cash, thus enhancing non-cash modes of transacting. With government payments – from MGNREGA to subsidies – shifting to direct cash payments into bank accounts, the predominantly cash-based economy is going to shrink whether we like it or not. We are on the cusp of a major explosion in digital and non-cash payments, and we can expect a hockey-stick pattern to growth. We should not be fooled by the fact that currently the data does not reveal this kind of jump. It is likely to happen sooner than later.

Just as no one in 2003 could predict that India would hit some billion-and-odd mobile phone users in a decade, we are at the same inflexion point in non-cash transactions.

Love it or hate it, DeMo changed the rules of the game, and therein lies its essential success even as it dragged the economy down.