Public Opinion, Not Snobbish Elites, Will Determine The Success Or Failure Of Demonetisation 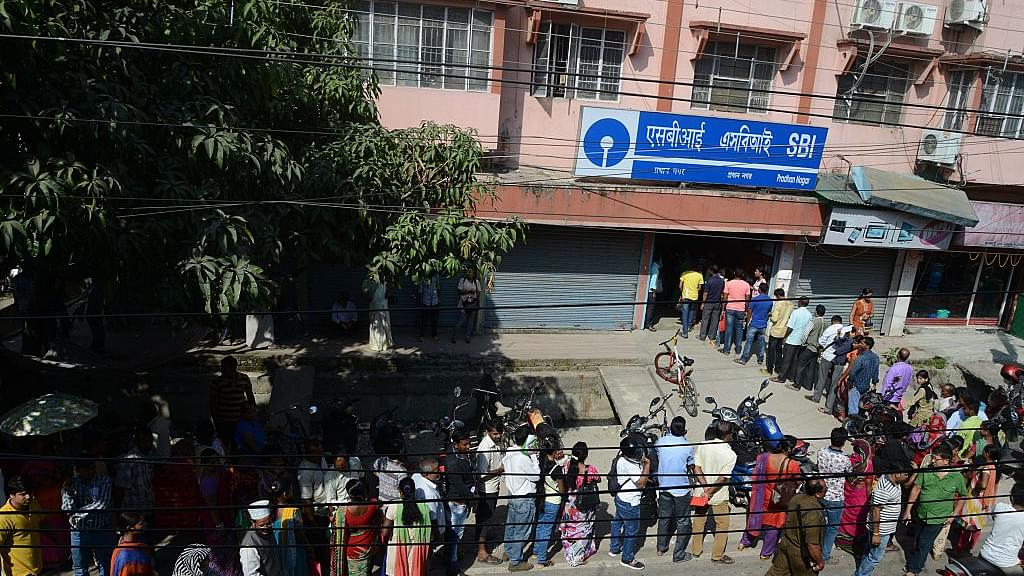 Indian customers line up next to an ATM at a bank in Siliguri. (DIPTENDU DUTTA/AFP/Getty Images)

Going by the tone of the op-ed pundits at home and abroad, the “Armageddon” is upon us in the season of Christmas, and we should be prepared for genocidal excesses worse than Hitler’s Germany and Mao’s China. The reality across India, however, is far more complex and largely benign in stark contrast to the exaggerated alarmism we are being treated to by op-ed columnists.

Much of the angst over demonetisation from the Lutyens’ pundits comes down to the manner of decision-making rather than the substance of the decisions themselves. After all, it was these same columnists who not too long ago had advocated for the shift towards a cashless, digital society by calling for eliminating “black money by eliminating money itself”.

Today, the elite find themselves on the margins of decision-making, thanks largely to a prime minister who continues to see himself as an outsider in Lutyens’ Delhi. The same elite who used to monopolise policy debates and exert disproportionate influence on policy decisions now increasingly find themselves “out of the loop” and are not liking it one bit. This, more than anything else, explains the exaggerated metaphors and the runaway alarmism of op-ed columns.

How, then, must we judge Prime Minister Narendra Modi’s demonetisation? Is all criticism illegitimate? Are all voices in support of demonetisation “econoapologists of Modi”, as one editor labelled them?

Without mincing words, let it be said that the shock of demonetisation was rude and sudden. The road to recovery from it has been uneven with the final destination not yet in sight. Along the way, several lessons have been learned even as mistakes were corrected and rules were fine-tuned.

The shock of demonetisation also told us much about our attitude towards cash and our insouciance towards tax evasion. In its wake, a window of opportunity has also opened up to formalise the Indian economy with more digital and low cash transactions.

All of this, of course, will happen over an extended time period in the near future. How, then, must we judge Modi’s demonetisation in the immediate time frame? What questions must we ask? How do we know if the right questions are being asked?

Take the narrative around “demonetisation deaths”, for instance. Nothing is more stunning than how so many otherwise-smart people have been taken in by this narrative around deaths allegedly caused by demonetisation. So powerful is this narrative that you’re no longer lectured that “correlation is not causation”. So mind-numbing is the rhetoric that you no longer are subjected to detailed statistical analysis on the mortality rates on a typical day in India or on the proportion of deaths by cause across a population of a billion, and if these incidents were even statistically significant to be labelled as “demonetisation deaths”. Yet we see commentary and rhetoric replete with statistical fallacies that makes out “demonetisation” to be some kind of deadly political disease like “Vyapam”, logic and truth be damned.

A particularly disturbing aspect of this narrative, built on statistical fallacies, is how anecdotes and perceptions based on a few personal experiences have become a substitute for sound data. Every day we are fed news reports on how a given sector of the economy is in dire straits or on how a certain segment of the workforce is jobless. It is striking that none of these reports are on the basis of sound data, not even on sample-based surveys. Almost all of them are either anecdotal in nature or based on the perceptions of some sources, mostly unnamed.

An unintended consequence of the shock of demonetisation is that we now know how poorly we monitor and measure the economic health of several sectors of our economy with few reliable leading indicators.

And then you have arguments on how cash has suddenly become freedom’s twin sibling, perhaps lost at the Kumbh Mela of op-ed punditry only to be found in the wake of Modi’s demonetisation tsunami. The libertarian arguments on cash being synonymous with freedom make for powerful rhetoric and provide good material for abstract essays. But little do we hear anyone ask the question, when and how did cash become an entitlement on par with fundamental rights?

After all, hard cash is a supply-constrained commodity that needs to be printed, distributed, collected and replenished. When the already-constrained supply chain of cash is further grossly distorted by hoarding, forgery and a black market, how can it be treated as an entitlement on par with other freedoms?

The extent to which cash is akin to freedom is in that it needs the state to guarantee it, so we may repose our trust and faith in transactions involving it. There is no doubt that cash provides anonymity and a degree of freedom that we all seek in our lives from time to time. Such freedom is, at best, a luxury and hardly an entitlement when it has to come with a state guarantee and all the constraints and demands that such a guarantee would naturally entail. Perhaps these diehard libertarians who believe in a borderless economy and a stateless currency should switch to the bitcoins, but then they would have to go digital and cashless to dwell in that libertarian utopia.

The other side of the ‘cash is freedom’ argument that doesn’t get discussed much is how cash has also become the freedom to evade taxes in most small-value transactions. When Amartya Sen waxed eloquent on how demonetisation has deemed everyone a criminal, he forgot how all of us are guilty of aiding and abetting tax evasion every time we chose to be party to an off-the-books cash transaction with a shopkeeper, trader or even a doctor.

When cash became an entitlement, so did evasion on all petty cash transactions, for we also seem to want the right to a discounted price on goods and services that goes hand in hand with such evasion. When we burden our conscience over the hardship caused by demonetisation, do we also burden it over the hardship not alleviated because we have collectively deprived the treasury of those taxes which could have paid for a scholarship or a pension?

When we outrage sanctimoniously over the lack of empathy towards the hardship of others due to demonetisation, do we also pause to ask which hardship is more immoral?

When we question the morality of the shock of demonetisation, we must also ask what other strong medicine would it have taken to kick the habit of tax evasion in a democracy of our size and complexity?

Referring to the decisions made in the past month as authoritarian and autocratic is particularly reflective of the intellectual snobbery of the elite. Much of that labelling has to do with the culture of governance we have institutionalised in India, where we are excessively suspicious of the executive, largely cynical of the legislature and blindly in awe of the judiciary.

It also has to do with what the elite deem to be “democratic” or “undemocratic”. Activist decisions of the judiciary routinely encroaching on the domain of the executive are deemed “democratic” and “just” when they reflect the consensus of the elite. Such activism is rarely labelled authoritarian or autocratic, never mind the fact that neither the decisions nor the decision-makers can be held to account electorally.

The most legitimate line of criticism one has read of demonetisation till date has been on the effectiveness and integrity of the institution of the Reserve Bank. Paradoxically, having an eloquent RBI governor all these years meant little popular scrutiny of the institutional mechanisms of the RBI, for the former governor turned the spotlight away from the institution and to the individual.

With the current media-shy RBI governor letting the institutional processes and mechanisms speak for themselves, he has paradoxically ended up exposing their many shortcomings. If Raghuram Rajan was such an effective leader of the RBI over the past many years, no reflection on his individual brilliance as an economist, why is it that the RBI’s institutional mechanisms have come up short over the past month, be it in the area of planning or communication?

In conclusion, it must be said that there are only two courts that matter where Narendra Modi’s demonetisation will be judged, much like the flawed debate on judging him on Gujarat 2002. The first is the Supreme Court, which is already seized of the matter, where the constitutionality of demonetisation will be tested. The second and the ultimate court is the court of public opinion, with elections serving as the only legitimate test. The democrat that Modi is, he has not shied away from putting his decisions to the ballot test in every recent contest, and will most certainly continue to do so in every upcoming election.

The hardship of demonetisation is real, but over-the-top morbid punditry on it is vastly exaggerated. Till the citizens of India pass their judgment on demonetisation with their ballots, can we please give the morbid op-ed alarmism a rest?