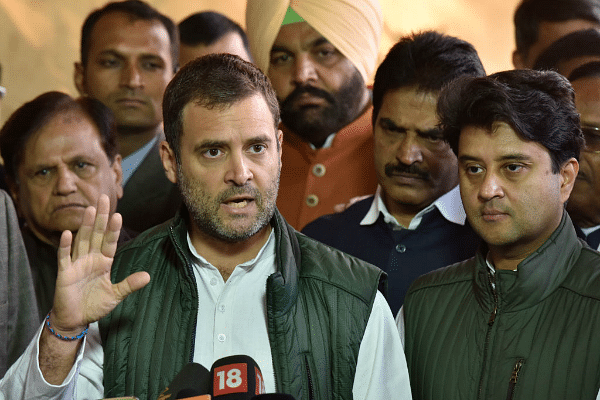 As if farm loan waivers of a magnitude of over Rs 2 lakh crore by various states has not done enough economic damage, Congress president Rahul Gandhi has threatened to force the Modi government to offer a nationwide waiver.

“We promised to waive loans in 10 days. In two states we did it in six hours,” Gandhi boasted, as if fiscal irresponsibility needs a lot of deliberation. Wasting taxpayer resources needs nothing beyond recklessness. Worse, he promised to not let the Prime Minister sleep till all farm loans were waived. If Modi doesn't do it, Gandhi will do it if he comes to power.

To buttress his case, Gandhi brought in the write-offs caused by loan defaults involving big business, without once mentioning two crucial differences: corporate bad loans are not written off across the board; only loans involving specific defaulters get written off when a business fails. Farm waivers, on the other hand, are nearly universal. Secondly, after the legislation of the Insolvency and Bankruptcy Code, when bankers take haircuts, the businessperson who defaults loses his entire business assets. When farm loans are written off, no farmer loses his asset.

Rahul Gandhi is clearly going to make loan waivers his unique selling point in taking on Modi in 2019. When many states have already done one round of waivers, demanding a double waiver, this time by the Centre, is essentially an act of economic sabotage. Yes, economic sabotage of growth.

Former Chief Economic Adviser Arvind Subramanian said last year that the waivers already announced and those yet to come would shave 0.7 percent off the gross domestic product and have a deflationary impact on the economy. We are already seeing that with states unable to invest in infrastructure and boost growth. If Rahul Gandhi wants to deliver a death blow to growth when the economy is already struggling to deal with the double balance-sheet problem, we need to hold him accountable for it.

Let’s be clear: it does not matter whether a ruling party promises a loan waiver or the opposition party does. The fact that a major national party is promising such a waiver will automatically make people stop repaying loans, thus making the bad loans problem worse. Gandhi is instigating farmers to end repayments. If this is not economic sabotage, what is?

Where will this leave credit culture if loan waivers are promised every now and then?

The Bharatiya Janata Party needs to take its share of the blame on loan waivers, with Uttar Pradesh in 2017 kicking off a round of fiscal harakiri. Now Gandhi is planning to make things infinitely worse.

It is easy to blame ruling parties for what is going wrong in the economy. But if states, which actually get 62 per cent of the national revenue cake, think they have a licence to throw fiscal caution to the winds just to cock a snook at Modi, as Gandhi is threatening, they must shoulder a larger share of the blame.

Rahul Gandhi is up to no good. As for Modi, he should avoid playing to the farm gallery. It is better to lose an election than do infinite damage to the economy in the name of helping farmers. The farmer will suffer the most when banks avoid further lending as credit culture is completely sabotaged.