Recovery Underway: Auto Sales For January Show That The Worst May Be Over 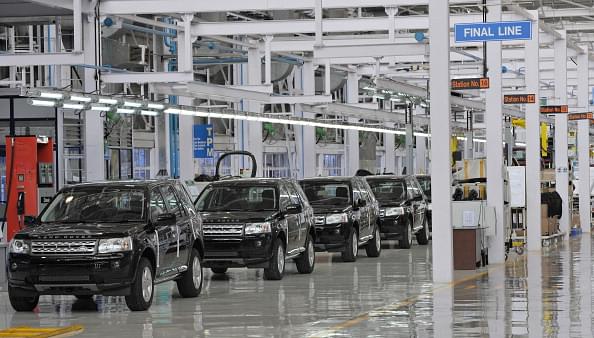 Land Rover Freelander II SUV vehicles are seen on the assembly line at the Jaguar - Land Rover manufacturing plant at Pimpri, in the western Indian state of Maharashtra. (INDRANIL MUKHERJEE/AFP/GettyImages)

It is now more than likely that the negative impact of demonetisation will be limited to the third quarter (October-December 2016) and the fourth (January-March 2017).

A critical bellwether industry – automobiles – seems to have shrugged off bad days in January 2017, with most car manufacturers, and some two-wheeler makers, reporting either a revival or demand, or flat sales. Of the 13 car and bike makers to report sales data so far, eight are in positive territory, with Maruti Suzuki reporting a sharp 26 per cent hike in sales compared to January 2016. Hyundai, Tata, Ford, Nissan and Toyota have all reported double-digit sales growth, with only Mahindra and Honda reporting minus nine per cent each.

But a turnaround is visible – albeit in a limited way – even in the more cash-sensitive two-wheelers sector. In December, two-wheeler sales were down 18 per cent for the industry as a whole, but in January, Honda Motorcycle has reported positive growth of 3 per cent, while TVS Motor had flat sales. Only Bajaj Auto (-16 per cent) and Hero Motocorp (-13 per cent), the top two domestic majors, appear to be still suffering the after-effects of DeMo. But Eicher Motors, which makes the Royal Enfield bike, reported a 23 per cent growth in sales in January, after a rollicking 42 per cent in December.

So, clearly, even this segment is putting the worst behind, despite some month-on-month blips. You would not be buying trucks if you don’t see demand for cargo movement in the near future.

The following tentative conclusions can thus be drawn.

#1: The after-effects of DeMo will be limited to this financial year.

#2: The demand scenario is beginning to stabilise, though this is not something one can say about all products, but automobiles are an early signal.

#3: The budget, which focuses a lot on rural spending, including higher allocations to MNREGA, will prop up demand at the bottom end of the market for most consumer durables and non-durables, including lower-priced two-wheelers.

We are headed for a revival from the DeMo setback by the first quarter of 2017-18.