The Govt Should Ignore Jewellers’ Strike 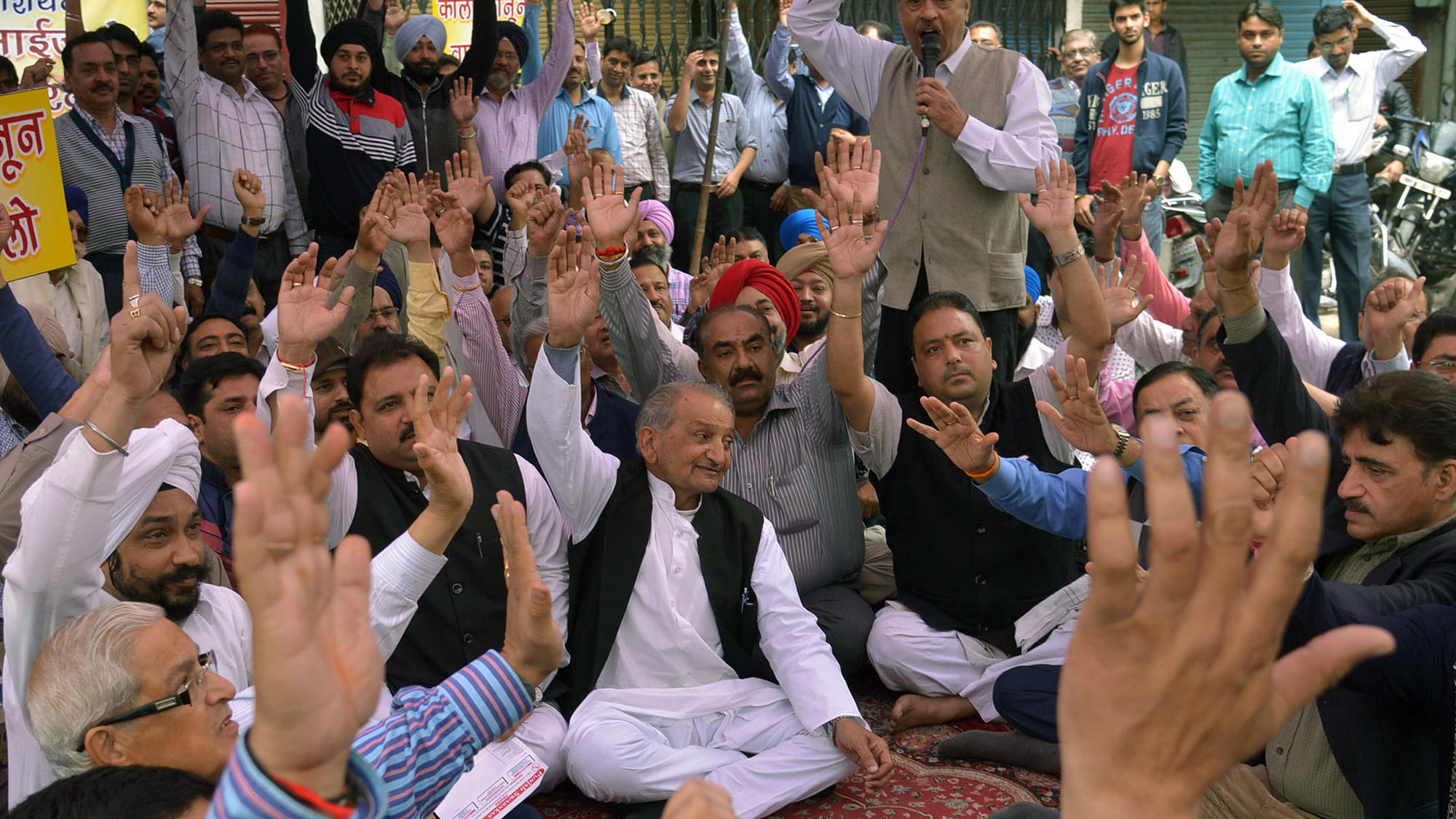 Indian jewellers shout slogans during a protest against excise duties on gold in Amritsar on March 3, 2016, during a three-day nationwide strike by gold vendors. Jewellers across gold-loving India are on a three-day strike in a bid to force the government to shelve plans for a controversial excise tax announced in this week’s budget / AFP / NARINDER NANU (Photo credit: NARINDER NANU/AFP/Getty Images)

The jewellers went on a strike on March 2, 2016. On March 20, it was reported that they had called off their strike after suffering losses of Rs 18,000 crore. But that did not turn out to be the case.

Media reports suggest that on March 21, a section of the jewellers continued to strike. A PTI report suggests that: “Most jewellery shops and establishments in the national capital remained shut on Monday despite government’s assurance that there will be no harassment by excise officials. Some jewellers kept their shops shut in Mumbai as well.”Meanwhile, the strike has caused a lot of trouble and heartburn for brides to be. A recent report in The Hindustan Times discusses the plight of women who are about to get married and do not have their gold jewellery in place. The report quotes one such bride to be as saying: “I’m hoping this strike will come to an end soon otherwise I have to go for imitation jewellery on my D-day.”

The brides to be have been left in limbo because the gold jewellers have been on a strike for close to three weeks. The jewellers are striking against an excise duty of 1% on “articles of jewellery [excluding silver jewellery, other than studded with diamonds and some other precious stones]” that the finance minister Arun Jaitley proposed in the budget of the government, for 2016-2017, that he presented last month.

Media reports now suggest that the jewellers are claiming that this change has had a huge impact on their sales. Given this, they want the Rs 5 lakh limit to be reinstated.

So what is it that the jewellers fear? They want the government to withdraw the 1% excise duty because they fear harassment by excise inspectors. While this is a legitimate concern, the government has asked excise officials not to make factory visits. A section of the jewellers called off the strike on this assurance from the government. Also, it is important to understand that the 1% duty will generate an extra audit trail.

Further, it is important to understand that gold in its various forms remains an important conduit for black money. Black money is essentially income which has been earned but on which taxes have not been paid.

As the White Paper on Black Money released by the ministry of finance in 2012 points out: “Cash sales in the gold and jewellery trade are quite common and serve two purposes. The purchase allows the buyer the option of converting black money into gold and bullion while it gives the trader the option of keeping his unaccounted wealth in the form of stock, not disclosed in the books or valued at less than the market price.”

A study on black money carried out by business lobby Federation of Indian Chambers of Commerce and Industry (FICCI) points out that: “Nearly 70-80 % of the transactions involving Jewellery are made using cash (black money).” This clearly explains how those with black money like to hold their wealth in the form of gold.

As the FICCI study points out: “Undisclosed sale of gold, silver etc. results in escapement of applicable tax liabilities. Tax authorities have estimated purchases of gold bullion and Jewellery as the second-largest parking space for black money, next to Real Estate.”

Given this, the move to make PAN card mandatory for cash transactions of Rs 2 lakh or more when it comes to making jewellery purchases, is an important move. If it leads to the sales of jewellers falling, then so be it. The black money wallahs might figure out alternative parking spaces for their money, but then why should the government make it easy for them? I mean you should not be able to get out of your house, walk down your street and convert your black money into gold. It has to be a little more difficult than that.

The FICCI study further points out that: “Apart from unreported cash transactions that lead to black money, jewellers (specifically small jewellers) often sell ornaments that are made using adulterated gold. This practice also contributes to black money, as the jeweller typically does not report the full profit made by selling ornaments at premium rates (when they were made using adulterated gold, which is cheaper).”

Hence, while gold jewellery is a conduit for black money, it also helps generate black money. Further, many jewellers discourage the use of plastic money and customers who want to use their credit card or debit card to make the payment, are typically asked to pay 2% extra.

One excuse offered by jewellers is that many buyers do not have a PAN card. Well, if someone is in a position to pay Rs 2 lakh or more for jewellery, I am sure he can get a PAN card made as well. It shouldn’t be that difficult.

Once these factors are taken into account, it is in the best interest of the country that more jewellers are brought under the tax ambit. And that being the case, the government should not back down on its recent moves and let the jewellers’ strike continue.