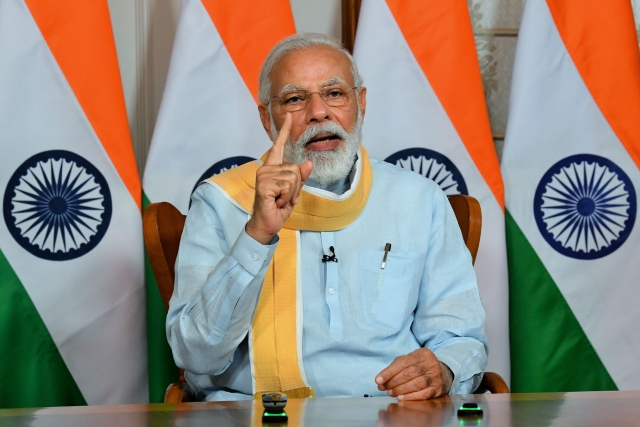 The political opportunists have made an issue of India’s decision to sign a loan agreement with the Asian Infrastructure Investment Bank (AIIB) for $750 million to support the measures taken under the Pradhan Mantri Garib Kalyan Yojana (PMGKY).

The regular offenders claim that we have taken a 'loan from China', or a 'Chinese bank' even as our soldiers were martyred by the PLA in the Galwan Valley.

The extent of financial illiteracy displayed by this narrative is one thing – but the opposition claims that there is a lack of cohesion in New Delhi’s policy towards China.

To begin with why such claims are false—AIIB is a multilateral bank, just like several other multilateral institutions such as the World Bank, the International Monetary Fund, the Asian Development Bank etc.

Indeed, AIIB is headquartered in Beijing, but it is not a Chinese bank. China does have 26 per cent stake in the bank, but the rest of the stake is owned by over 100 countries. India too, happens to have 8 per cent stake in the bank. Since China sits on the UN’s Security Council, does that imply that India should not use the multilateral forum just because of China being a permanent member of the UNSC?

The question, that thus needs to be asked is what is wrong with borrowing from a bank that has been formed by putting in our own money? More so because India is the second largest shareholder of the bank and India’s finance minister sits on the board of the AIIB.

The argument that India lacks a consistent policy towards China is faulty at the very premise of considering a bank with Indian money and the Indian FM on its board as Chinese.

On the response to China post the aggressive stance taken by the PLA, Indian government has looked at the key problems associated with overdependence on China, emergence of Chinese companies into sensitive sectors and their expanding avenues of influence in India.

Consequently, the government has tried to address the problem by using a multidimensional response ranging from economic, strategic and diplomatic interventions as and where necessary.

For starters, unlike before, or as under the UPA, the Indian government is clear that it will not allow the status quo to change. Consequently, every provocation is met with an appropriate response to ward off any future attempts at altering the LAC.

There is also a recognition that India is a significant contributor to China’s current account surplus and consequently, despite being a small trading partner, any economic response can have a disproportionate impact. This is precisely why India has started to restrict the extent of trade and cooperation, especially in areas such as technology, telecommunication, education, transport and public procurement with the intention of responding to China.

Moreover, there has been restrictions on FDI to prevent opportunistic takeovers of Indian companies while SEBI also sought details of existing investments in Indian markets coming from or via China. The strong response by the CCP in Hong Kong has further led to India increasing the scrutiny on flow of finance and capital from Hong Kong with the intent of sending a strong message to China regarding the resolve of the Indian government to protect its strategic and national interests fiercely.

These measures are part of a comprehensive rethink on how we view the region in the post-COVID world. This rethink comes at a time when the US is pushing for a clean network alliance and the recent ban on Chinese applications has indicated a systematic realignment of the global order over the coming few months.

The response to the Chinese has been steadfast and displays the strong commitment of the present administration to deal with the issue with utmost care while considering the multidimensional nature of the problem. To suggest the contrary, on the basis of false equivalence, is not just great disservice to the people of India but also reeks of a malaise to support the campaign by certain members of the CCP to weaken India by creating domestic frictions that pre-occupy our administration.