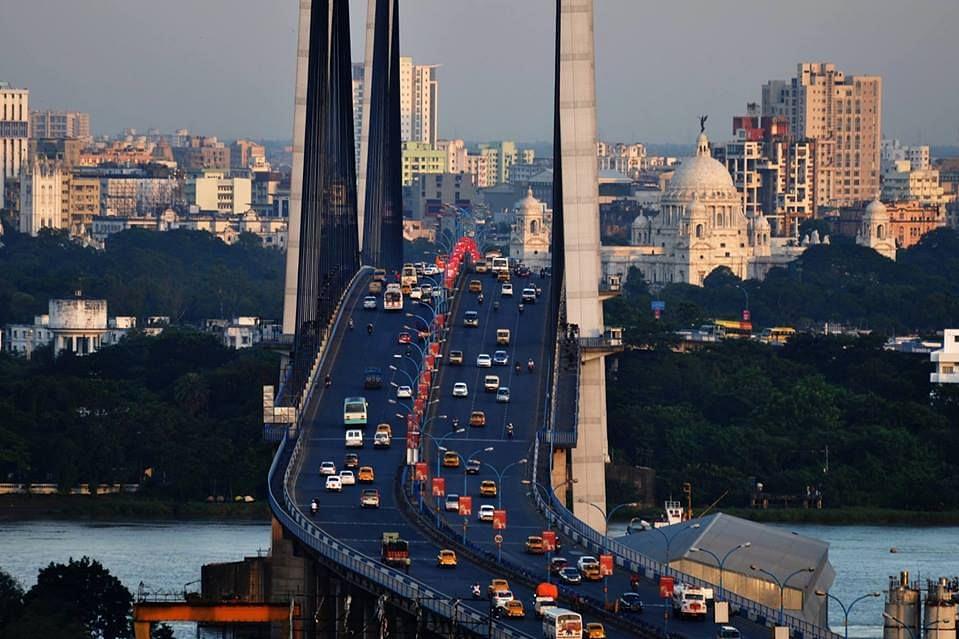 Kolkata skyline from the Hoogly bridge.

All elections are mini-festivals in India — time for the argumentative Indian to engage in more-than-usual arguments on life, earth and the universe. The imminent elections in West Bengal are no different. A key point of debate and contestation will be around the economic performance of the state.

The usual critique of the state’s economic performance is usually within — how its relative pecking order has slipped, from being one of the top two industrial and financial powerhouses of the Union in the 1960s to a rather middling position today, below the western and southern states.

However, a clear-eyed evaluation of the past performance of Bengal today most rudely stumbles against a curious, stunning case of neighbour’s envy — the spectacular, near-Asian Tiger performance of Bangladesh in the last couple of decades.

West Bengal and Bangladesh are no ordinary neighbours — the similarities of language, culture, history, demographics and geographical nuances are immense.

Historically, the western half of (undivided) Bengal always represented greater wealth and progress compared to the eastern half.

Economic growth has also spilled over into human development index (HDI) metrics — and today Bangladesh is ahead of West Bengal in many of them. This reversion of the traditional Bengali power-equation, while being less important culturally today given Bangladesh is a different country, nevertheless presents the biggest eye-opener on the laggard-ness of West Bengal for a long time now.

To be fair, Bangladesh isn’t a neighbour’s envy issue for West Bengal alone, but in general for India.

In 2020, Bangladesh would have finally surpassed India in per-capita income, after nearly a decade-long higher growth has been narrowing down the gap continuously.

While that is at best cold comfort, West Bengal’s relative position in the Union has been on a free fall too — from being one of the top two it now ranks twenty-first out of 33 states in terms of per-capita income.

The “bear case” for the state is, therefore, quite easily made. All is not lost though.

Historically, the biggest asset of the state has been the city of Kolkata. It has been the fulcrum of arts, commerce, politics and more — for (undivided) Bengal in specific and the Bengali diaspora in general.

It remains, somewhat surprisingly for many, one of the richest cities in India by GDP — most city surveys posit Kolkata as the third richest city in the country, after Mumbai and Delhi. And Kolkata represents the biggest lever and opportunity for the economic revival of West Bengal.

Cities represent engines of growth, and urbanisation has driven growth in countries all around the world. The same experience has been seen in India too, with greater affluence leading to greater urbanisation.

The nuts-and-bolts of a Kolkata-centric rejuvenation of the state are all in place. The issue isn’t so much about physical infrastructure. Several perceived-to-be-more-dynamic cities in India have worse infrastructural issues than Kolkata — Bengaluru has worse traffic, Delhi has worse law and order, Mumbai has an equally strained public transport.

Kolkata retains the key attributes of an important city, not just for West Bengal, but the entire region “East of Kanpur” and potentially right up to the Mekong river delta.

Kolkata is the only city in the region which houses institutional industrial infrastructure, financial networks and an idea of a city.

It houses the eastern region hubs for a range of international and national corporate entities, including leading financial services institutions.

Add systemic changes in geo-economics — GST driving consolidation of logistics in regional nodes, connectivity projects with Bangladesh and Myanmar, the general thrust of India’s “Look East” policy —and Kolkata’s potential as a hub of all these changes is undeniable.

The city, as it is, is the medical tourism hub of the East – with patients from far-flung regions of Bangladesh too coming to Kolkata for advanced medical treatment.

Last but not the least, Kolkata remains a cultural hotspot —in music, films, arts. In short, Kolkata’s sinews are all there, in parts or in whole.

What the state needs is to double down on its focus and investment in its core asset — Kolkata.

A re-emergence of the city as the cultural, intellectual and eventually an innovation hotspot would pull the rest of the state up via net externalities of services and immigration.

Tax incentives for warehouses rather than steel plants, state government equity for a world-class private university rather than (yet another) state highway, litigate with the central government to set up the new development finance institution (DFI) in Kolkata rather than minutiae of industrial policy — the state needs to pivot firmly in favour of the city.

The right investments in its existing sinews will bring back West Bengal’s biggest asset — its people, who have out-migrated in droves over the last 40 years. Once Bengali talent congregates again in Kolkata, progress would be a very natural by-product.

For too long, policymakers in the state have concentrated on rejuvenating manufacturing industry as a core driver to kickstart the economy. This has run into structural problems.

A densely-populated state with fertile land has made large-scale land-acquisition a near-unsurmountable political challenge.

Recent experiences have not helped in wiping off the impression of the state as being “industry unfriendly” amongst the private corporate sector.

Large welfare obligations and a constrained state of the state fisc have meant fewer resources for public sector-led manufacturing.

In a nutshell, it would be a lot more with-the-tide to craft a strategy around Kolkata than one around new car manufacturing units.

Bengal’s glorious days were when India’s financial, cultural and industrial elite lived, worked and played in Kolkata. A restoration of the past glory would need to be a journey via the city, again.