PM’s Marital Status None of Our Business 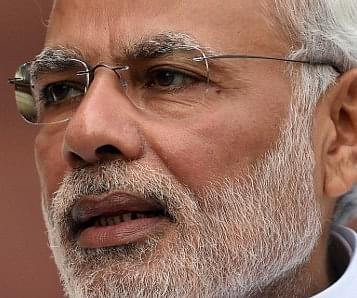 Narendra Modi’s wife Jashodaben’s RTI application about her security has suddenly got a lot of ‘social liberals’ counselling the Prime Minister. We should leave his private life alone.

There are five different manners in which the RTI application from Jashodaben Modi, estranged wife of Prime Minister Narendra Modi, wanting to be assured of her safety, can be viewed: hypothetically, liberally, spiritually, historically and factually. None of the ways, as readers will see through this article, justifies the sudden advocacy by ‘social liberals’ (read detractors of Modi) that the Prime Minister must either accept Jashodaben in his family fold or divorce her—one of the two normally accepted social conventions for marital partners.

In her RTI, Jashodaben has apparently said that she is afraid of her bodyguards since Indira Gandhi was killed by her personal bodyguards, so she needed complete information on the guards protecting her.

But no way is Jashodaben in a position comparable to that of Indira Gandhi who had irked an entire community with her mishandling of the Punjab situation by first hobnobbing with Jarnail Singh Bhindranwale and then ordering Operation Bluestar which ended with the Indian Army in the sanctum sanctorum of the Golden Temple. Invocation of the incident perpetrated by Mrs Gandhi’s bodyguards Beant Singh  and Satwant Singh in Jashodaben’s RTI application is ludicrous.

Second, if Jashodaben feared that her life was imperilled because she was an embarrassment for the Prime Minister—with the presumption that Modi is evil—a politician is likely to avoid discomfiture by preventing the disclosure. Now that the whole world knows Modi was once married, what is the point silencing his separated wife?

Factoring in both the reasons above, and given that Jashodaben led a secluded, low-profile life till last year, chances are high that political rivals of the BJP—most probably, low-rung, too-clever-by-half Congress leaders in Mehsana district of Gujarat—are inciting the poor lady for trouble.

With all its flaws, the Indian mainstream media is better than the tabloid and paparazzi-driven European media that drove Princess of Wales Diana to a fatal car crash and pushed a host of lesser celebrities to substance abuse and clinical depression.

What our public figures do in their private lives have never bothered our journalists in print, if insiders were to ignore the Press Club-style gossip that never turns official. Displaying equal maturity, voters have never brought in a government or dropped one on the basis of how the party’s leaders conducted themselves at home. So, what explains the zeal of this very crop of people who spent the whole of yesterday on social media, counselling the prime minister what he should do about his wife? The poking certainly did not behoove those who love to be identified as liberals.

Ironically, while the ‘liberals’ are purportedly anti-Brahminism, they are today speaking the language of the Brahminical faction in the Sangh Parivar that was against an OBC Modi’s rise till last year owing to his clash with Sanjay Joshi, the (former) Gujarat BJP politician. It was the Brahmins in the Sangh who first carried out a whisper campaign about Modi’s marriage to counter the public humiliation a Brahmin Joshi had to undergo due to an allegation of sexual indiscretion.

It is surprising to note that the Indian commentariat has not internalised Indian spiritual mores. In a nation where Gautama Siddhartha abandons his wife—coincidentally called Yashodhara, the pristine version of Jashoda—to answer his spiritual calling, some commentators are finding it difficult to come to terms with the fact that a teenager (more about this later) with an urge to renounce life excused himself from marriage and wandered about in the Himalayas in search of some greater meaning of life.

The Buddha must be heaving a sigh of relief that his times did not have 24×7 television channels and an enthusiastic accompaniment by Twitter and Facebook to put his journey under constant scrutiny, more so because, unlike Modi, he also had a son whom he did not care for either. And that was perfectly acceptable to our ancestors who revered him for his Eight Fold Path and did not hold the act of abandonment of family against him.

Where one can take a lesson from the Buddha and extrapolate it on Modi is that, many years later when the founder of Buddhism was very far away from his past identity of Prince Siddhartha, he ran into his wife and son again. He did not ask them to come back to his life.

The tradition did not stop there. Chaitanya Mahaprabhu left his wife Bishnupriya in search of Lord Krishna. He would meet his mother off and on after taking sanyasa. When he would visit his old home, he would call out for his mother from outside the abode. Mother Sachi Devi would urge the daughter-in-law to stay indoors and come out to meet her son. For the sanyasi, even the sight of his ‘former’ wife was forbidden!

Modi, focussed on the job of Prime Minister, wouldn’t be following the Buddha if he were to call Jashodaben back to his life. Following in the footsteps of Chaitanya, he still meets his mother Heeraba but never his wife.

This is not to raise a contemporary politician to the high pedestal of saints. But the whole village of Vadnagar bears testimony to the fact that Modi was driven by the idea of renunciation from early childhood. One may visit the Belur and Rajkot branches of Ramakrishna Mission whose records reveal that a young Narendra had approached Swami Madhavananda Maharaj and Swami Atmasthananda to make him a monk of the Mission’s order.

One may or may not agree with the ideology of the Rashtriya Swayamsevak Sangh that Modi joined later. That takes nothing away from the fact that he was convinced that was the right path for him, and family did not figure in his frame of mind or scheme of things at that point. Even today, his acquaintances say he has no social circle; he thinks nothing beyond his work.

Within this section on spirituality, I am impelled to bring in another hypothesis. What if this unifocal man decides to embrace his wife eventually? Remember Lord Rama from the Ramayana. The lord tried his best to be a good husband as much as a good king. Feminists will tell you how miserably he failed on the first count.

Since the so-called liberals are also rationalists or atheists who pooh-pooh the Ramayana as mythology, let’s study the private life of Mohandas Karamchand Gandhi. He could neither keep wife Kasturba happy—imposing on her, for example, the strict code of cleanliness that entailed manual cleaning of toilets in the ashrams—nor could he satisfy his eldest son, a bewildered Harilal, who hopped, skipped and jumped from the dream of a Bar-at-Law from England, conversion to Islam and back to Arya Samaj, appearance in his father’s funeral in a state of dereliction and eventual death of a liver disease induced by alcoholism.

Given that Modi is known to have a one-track mind that cannot think beyond work, what homely pleasure can he offer to Jashodaben?

Therefore, why not divorce, one might ask. But what is divorce meant for? Either one or both the partners want to remarry, or one is eyeing a lucrative alimony. The first is unthinkable for both Narendrabhai and Jashodaben. The second is not plausible; the wife could have demanded monetary help if she had to when the husband was Chief Minister of Gujarat for almost 13 years.

Modi’s father Damodarbhai was a domineering personality in the family whose decisions none dared contradict, let alone challenge. He had promised his childhood friend that the latter’s daughter would be married to Narendra. The day elder sons Sombhai and Amritbhai were getting wedded, Damodarbhai ordered Narendra to get into the wedding arena and tie the knot with Jashoda. The intimidated son, who had barely crossed 17 years of his life and was terribly in awe of his father, obliged.

That very day, however, he could speak to his newly wedded wife. He said he was never meant for grihastha (household life) and would leave to lead the life of an ascetic soon, which he did two years later. In the meantime, he hardly stayed home; his childhood friends recall his unfathomable quest for something otherworldly for which he wandered about in the region.

The marriage with Jashoda was not consummated. Before leaving for the Himalayas, he told her she was free to marry again. From a distance, he ensured that Jashoda completed her formal education so that she could fend for herself. Indeed, she went on to become a teacher, thanks to her education inspired by the husband who wasn’t.

The whole of Vadnagar village knew about this one-day marriage, and so did the local branch of the RSS. This organisation does not accept married men as pracharaks, but the Sangh did accept Modi as one because it knew this marriage meant nothing.

Leave the separated couple alone. Modi’s primary organisation, with full knowledge of the facts pertaining to his conjugal condition, had accepted him and, for more than a year, fought with competitors within the Bharatiya Janata Party who nursed prime ministerial ambitions to prop him as the saviour of the country passing through a dire phase of economic slowdown and threats to national security. Now, it’s not the Prime Minister’s marital status that is holding up the nation’s development and keeping its borders and territory unsecured. A public figure’s private life is none of our business.