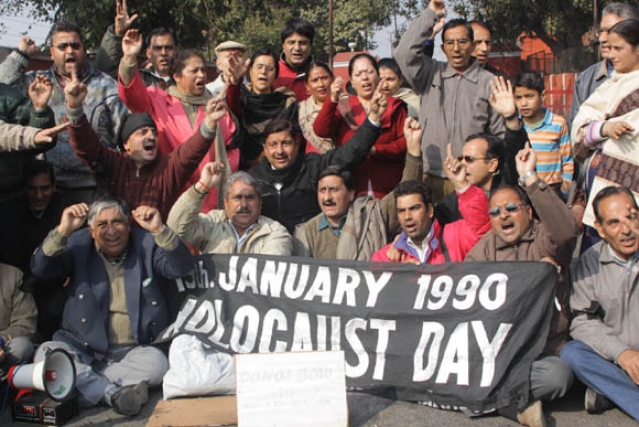 The turmoil in Kashmir valley is more than two decades old now. The onset of turmoil in Kashmir valley in 1989-1990 was marked with the ethnic cleansing and genocide of Kashmiri Pandits. Ethnic cleansing is an attempt to create ethnically homogeneous geographic areas through the deportation or forcible displacement of persons belonging to particular ethnic groups. United Nations defines ethnic cleansing as rendering an area ethnically homogeneous by using force or intimidation to remove from a given area persons of another ethnic or religious group. Many Kashmiri Muslims (and not all) joined the so called freedom movement and chose to be part of armed struggle. The objective of militancy in Kashmir was to create a valley homogenous in its religious (read Islamic) character. To create such homogeneity, Kashmiri Hindu minority was forced to leave the valley.

Ethnic cleansing sometimes involves the removal of all physical vestiges of the targeted group through the destruction of monuments, cemeteries, and houses of worship. Ethnic cleansing may involve death or displacement where a population is identified for removal from an area. In Kashmir, houses of minority Hindu Pandits were burned; temples were destroyed. Notices were pasted on the walls of Pandit houses asking them to leave the valley or to perish.

Genocide may be used as means to carry out ethnic cleansing. Genocide is defined as the deliberate and systematic destruction, in whole or in part, of an ethnic, racial, religious, or national group.

Article 2 of 1948 United Nations Convention on the Prevention and Punishment of the Crime of Genocide (CPPCG) defines genocide as any of the following acts committed with intent to destroy, in whole or in part a national, ethnical, racial or religious group, as such:

The National Human Rights Commission (NHRC) in a ruling on 11 June 1999 stated that “Against the stern definition of the Genocide Convention, the Commission is constrained to observe that while acts akin to genocide have occurred with respect to Kashmiri Pandits and that, indeed, in the minds and utterances of some of the militants a genocide-type design may exist, the crimes against the Kashmiri Pandits are near-Genocide and not Genocide.”

In the speech on 7 April 2004 the UN Secretary General said, “Wherever civilians are deliberately targeted because they belong to a particular community, we are in the presence of potential, if not actual, genocide.”

1990s were painted with genocide of Kashmiri Hindus. Many Kashmiri Hindus were murdered. Kashmiri Hindus were targeted by the militants in 1989 and afterwards until they didn’t left the valley. The official figure of Kashmir Pandit killings is 219. Kashmiri Pandit Sangharsh Samiti (KPSS), a valley based NGO, disputes the government figure. In its first list of a survey, Kashmiri Pandit Sangharsh Samiti (KPSS) suggests that 399 Pandits were killed and the list of KP killings is still incomplete. KPSS did the survey in 2008 and 2009 to find the exact number of Pandits killed, which revealed that 302 members of the community were killed in 1990 alone. Selective killing of minority Hindus amounts to genocide.

In exile, thousands of Kashmiri Pandits have died due to change in environmental conditions. Kashmiri Pandits were forced to live in hostile conditions in make-shift camps in Jammu/Delhi. During summers, the average temperature of Kashmir would generally be in thirties while in Jammu/Delhi, it is in forties. Think of 45ºC and 6-8 people living in a tent. The habitat change resulted in sun-strokes, anaemia etc. which caused many deaths. Moreover, deaths happened due to snake bites as slum-like conditions of camps became the breeding ground for snakes. Even after 21 years, some are still living in camps.

Those Kashmiris who chose/supported the gun are responsible for the grievances of all Kashmiris whether Kashmiri Muslims or Kashmiri Hindus. It is amusing when the separatists (some of them were terrorists in 1990s) state that they are in favour of return and rehabilitation of Kashmir Pandits. Because they are the same people who were responsible for the exodus of minority Hindus from the valley.