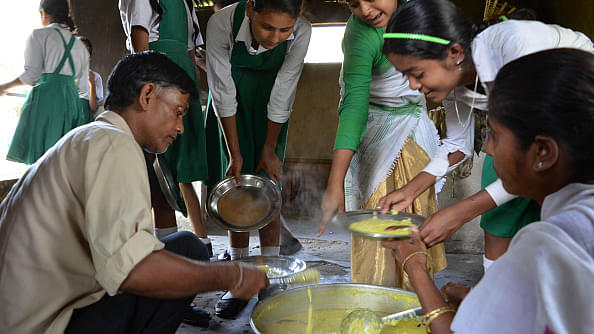 India is a land of contrast. News headlines such as the successful launching of the largest satellite are making the government and the citizens proud, whereas headlines such as India ranking a measly 97 among 118 developing countries on global hunger index (2016) shows that we are failing our unfortunate even after six decades of independence.

The promise of the Modi government to work on poverty alleviation, farmer welfare and financial inclusion stills remains to be fulfilled.

Despite the phenomenal economic growth and industrial advantages, a majority of Indian citizens especially women and children do not have access to nutritious food and are undernourished.

According to the statistics, 15 per cent of Indian population is under-nourished with one in four children having little or no access to nutritious and adequate food. 3000 children die in India due to diet-related diseases with 58 per cent of children stunted before they reach the age of two.

The condition is dire among the women and children when compared to male. Also, 40 per cent of fruits and vegetable and 20 per cent of the food grains produced is wasted to the faulty supply management. The situation is worsening with each year passing.

There are provisions in Indian constitution under Part IV-directive 47 which states that it is the duty of the state to raise the level of nutrition and standard of living and to improve public health. Although not enforceable by law, it does obliges the Government of India to provide adequate provisions for food to its citizen and Indian government does have a comprehensive food subsidy policy to serve its citizen.

But due to lack of proper implementation, the policies are failing at their objective.

Successive Indian governments have launched several schemes aimed at alleviating the hunger and poverty of its citizen.

Such schemes includes Antyodyaya Anna Yojana (AAY) which was launched in 2000 to provide food subsidies for ‘poorest of poor’ people and now include almost two crore impoverished families in the below poverty line (BPL) category to get subsidised food grain at a fair price shop, midday meal plan which is the largest school meal scheme in the world covering approximately 120 million kids. Annapurna scheme provides free grain to senior demographics (above 65 years) and emergency feeding programs adopted by the government to provide nutritious food in acutely economically backward regions such as in remote Kalahandi-Balangir-Koraput (KBK) district in Orissa.

In all fairness, the intention behind these schemes is well intended, but they are eventually grandstanding aid strategies developed by privileged people based on out-dated ideology.

The food schemes are plagued by corruption, poor administrative oversight and underpayments to the vendors.

The middle man are reaping benefits from the schemes by selling the food grains meant for poor people in the open market and complaints are ignored due to the political clout of the local politician and ration dealers. The lack of major revision after the initial implementation of schemes also contributes to the failure.

The Modi government in their election manifesto promised to clear the bureaucratic fat from the food schemes which would make it less susceptible to corruption and political manoeuvres.

It did fumble through some ideas such as restricting the amount of food served in the restaurant to curb food wastage and incoherent modification to the national food security act of 2013, but any concrete measure is still to materialise. Many believed that Bhartiya Janata Party (BJP) would be more earnest in curbing chronic hunger and poverty as it had a pretty good record in BJP controlled states such as Chhattisgarh and Madhya Pradesh (transparent and more efficient public food schemes).

Food aid strategies are ‘band-aid’ strategies and need constant revisions so that they stay on the objective. A new scheme based on the combined frame work of community kitchen and food subsidy can be a viable option to supplement the failing food aid programs.

Community kitchens are usually hailed as a populist move and the idea is to provide cheap or free nutritious food as a service to the general public. The community kitchens are either run by a religious institution (such as langar at Gurudwaras or soup kitchen by churches) or by the state.

This new scheme would have increased government role in running the community kitchen which would be combined with the existing food subsidies. The entire infrastructure for the new scheme can be derived from the resources of existing food aid program, and thus, only minor financial deliberations are needed to enact such a scheme.

Some variations of the new proposed scheme are already being implemented in Tamil Nadu. Amma canteens is a state sponsored initiative for food security in urban Tamil Nadu. The new scheme (proposed in this article) call for extending the framework of Amma canteen to rest of the country albeit with some revisions.

Dal Bhat Kendra (operated in Jharkhand, Orissa and Chhattisgarh but recently cancelled) and Jhunka Bhakar Kendra (started by Shiv Sena government in 1995 and cancelled in 2007) are few more examples of unsuccessful government tangle with some primitive versions of the idea behind the proposed new scheme.

The raw materials would be obtained either through government ration shops or from the state farmers at a pre-determined price using existing government procurement machinery.

The menu would include locally consumed staple food items (Amma canteens only serve Idli, Pongal, Rice, Chapati and Dal) which would save any overhead cost.

Few immediate benefits of the new scheme are the creation of employment especially for women and elimination of the middle man which reduces the probability of corruption. This method has a dual advantage of providing employment as well as providing aid to the people and help in breaking the cycle of constant of poverty.

It also provides an incentive for women to seek employment as they would not have to worry about feeding the family. This will also act as a measure of food security for elderly and disabled and would effectively tackle the malnourishment in children. This scheme can also be linked to existing UN programs.

Successful implementation would involve sustained operation of the scheme so that all the operational kinks can be smoothened. Also, political components need to subdued which was one of the primary reason being the cancellation of Jhunka Bhakar Kendra.

The current BJP ideology is more aligned towards self-help rather than sustained government aid as evident from its plan to phase out AAY program and budget cuts to the mid-day meal scheme.

However, this new scheme would combine self-help through government aid as by providing nutritious food, it is making sure that women can focus on independent employment supplementing family employment and children continue their education.

This will be a nice legacy to Prime Minister Modi and would give him much coveted global respect.