Rajaji On The “Stateless Ceylonese” 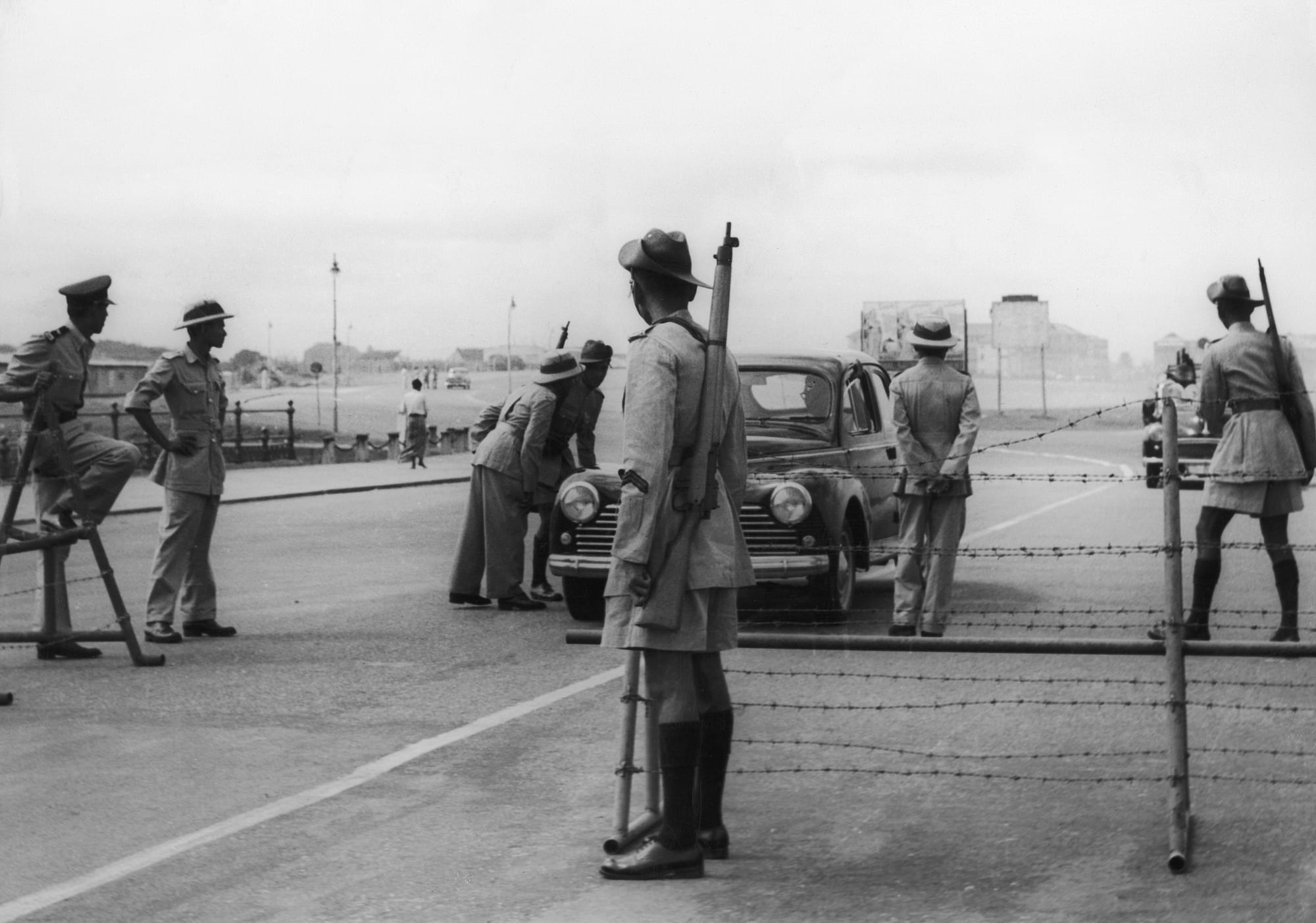 Police at a special roadblock, set up during the parliamentary debate on the Tamil Languages Bill, in Columbo, Sri Lanka, 11 August 1958. (Keystone/Hulton Archive/Getty Images)

Whatever be our particular national problems there are some fundamental principles which we dare not ignore if we desire to maintain civilization. A person has rights of citizenship in a particular state because of his birth or because of his personal choice to be a citizen of that State. His trade or other interests in a foreign State should not be a disqualification to be enrolled as a citizen of the State in which he lives and has interests and stake and of which he desires to be a citizen.

All this would be an elementary axiom, but in Ceylon We have a government that does not accept this axiom. It dislikes it citizens to hold property and desires to bar persons of Indian ‘origin’ from being enrolled as nationals of Ceylon on that ground. Where any person desires to be a Ceylon citizen but does this only to carry on as a spy on behalf of another national, one can understand being refused citizenship. But where his property, his avocation and interests and attachments converge to make him see citizenship in Ceylon, it is remarkable that the Ceylon government considers it right and proper to refuse the application on the simple ground that he holds some property and has some interests in the neighbouring State of India. There is no question of double citizenship. The persons who seek Ceylon citizenship have no idea of holding and cannot in fact hold any citizenship in India. A recent judgement of the Ceylon High Court delivered by Judge Fernando has brought to glaring light this wrong attitude of the Government of Ceylon in the case of A. Marimuthu. The court has condemned the Government’s refusal of citizenship in the case in pretty severe terms.

Had this been a single or exception case or one of a small number of that type, we could afford to be amused. But tens of thousands of families in Ceylon have been refused citizenship-registration on such and even more flimsy grounds, such as that the man visited India three of four times for some reason or other! This sort of thing makes it a case for international concern. Would America object to any of her citizens or would-be citizens visiting countries abroad or having property in neighbouring States, say Canada or Mexico?

The position is difficult to fit into any code of proper relationship between States. India is not an enemy to Ceylon. Families of Indian origin who have settled there and lived for generations as honest people carrying on some avocation are today being refused to be treated as citizens in spite of their earnest desire to continue to be Ceylon citizens. A State may be entitled to restrict new immigrants but the question here is with reference to persons who have lived in Ceylon for years and years. The injustice is patent and the magnitude of the problem makes it one that calls for international attention. A man’s own attachment should settle what State he belongs to and it is not a case for investigation at all unless there are charges of some kind of criminal and anti-national activity. Would Canada refuse citizenship to anyone who seeks to be a Canadian citizen just because he has some property in America? Or vice versa? A man’s choice as to where he belongs must not be nullified by the decree of any executive authority. A refusal to recognise this elementary principle has resulted in a great body of “Stateless” people in the island of Ceylon, which is a public scandal that must be terminated at once.

This article, authored by C Rajagopalachari appeared in the 13 December, 1958 edition of Swarajya