From The Archives: Why Communism Thrives In Bengal 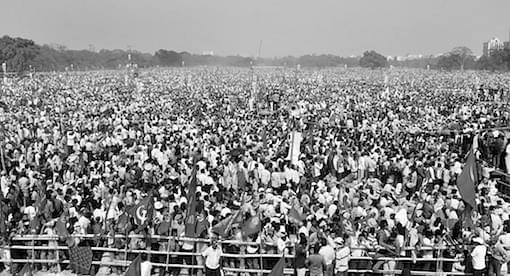 A Communist Rally in Kolkata

Calcutta has earned the doubtful distinction of being designated a dead city, its normal flow of life being continuously disturbed by an almost unending series of demonstrations, processions and meetings. Today it is not at all difficult for a left political party, particularly the Communists, to hold a meeting of a lakh of people on the maidan. They parade this phenomenon as evidence of their tremendous popularity and try to coerce psychologically the democratic forces of the country.

The latter sincerely deplore this increase in the influence of the communist camp in this key city and hold Congress misrule responsible for it. The faulty planning and the inefficient and corrupt administration of the Congress have imposed an almost unbearable burden upon the people, which has so much exasperated them as to make them an easy prey to the communists who are promising a millennium for them and are ever ready to fish in troubled waters.

Though this argument may appear plausible, it is however wrong to presume so. For it is really not unbearable misery, which generates discontent in the minds of people and tends to incite them to revolt. Those who live on the verge of starvation are too weak to resist or welcome any change or take any risk in life. In this sense we may speak of the conservatism of the poor, which is no less responsible than the conservatism of the privileged for the perpetration of the status quo.

It is an improved condition which leads- a man to protest and revolt. A taste of a few good things makes him hanker after more and more. Thus it is found that both in France and Russia there was comparative prosperity on the eve of the revolutionary outbreaks there. It is hope that rekindles hope. To say, therefore, that the contemporary mass movement in Calcutta under the leadership of the Communists is the consequence of an ever deteriorating economic condition of the people is not true. Had it been so, the same phenomenon would have been evident in several other parts of the country also since economic hardship is not a peculiarity of this city alone, while mass movement is.

The clue to the contemporary mass movements of this city has to be found not in the economic condition of the people but in their peculiar psychology. It is an oft-repeated dictum that man is a social being. In fact, however, he is more than a social being. He is a community being. A social life is possible even on impersonal cooperation. But a community life connotes a direct and personal relation among the members of the group. It is because man is a community-being that if he is released from the context of his particular community and its moorings, he becomes a victim to the terrible sense of loneliness and insecurity. The insecure and lonely individuals then seek a communal refuge of this sort or that and coalesce into anonymous faceless mass. That is why dictatorship has a great appeal to the masses.

During the post-Independence period there has been an unprecedented concentration of East Bengal refugees in Calcutta and the surrounding districts. They offer a spectacle of a huge mass and uprooted humanity. Family and neighbourhood constitute the two most important communal ties of man. The family life of the refugees has been mostly blasted. They live in colonies where neighbours are no better than mere night-dwellers. East Bengal had her own characteristic culture. These refugees have been divorced even from that cultural context. As a matter of fact, they have lost all the moorings of their life. In this part of Bengal they find themselves in an environment which is also not very friendly to them. Over and above this, many of the refugee families are also without an assured income and have hardly any prospects in life. In the circumstances it is but natural for these unfortunate people to turn into sprawling masses and serve as cannon fodder for the Communist movement. Truly speaking, the Communist movement of Calcutta is largely a refugee movement. This explains why the so-called mass movements constitute a characteristic of the post-Independence period.

It is not the “correctness” of the Communist doctrine which attracts these refugees. Rather they join the Communist movement because they find a psychological refuge there. A mass movement led by any other totalitarian party could as well serve their purpose. In fact, the refugees are often found to transfer their allegiance from this left party to that. That is why it becomes possible even for a small party like the Socialist Unity Centre to organize huge meetings and processions in Calcutta. The truth is that these left parties make their appeal to the same type of mind and draw their support from the same type of people.

The moot question then is—how to free the city from these disturbing mass activities of by the left parties. Our diagnosis shows the way in which the solution is to be sought. We must try for the integration of the refugees in the social life of Bengal as quickly as possible. This means both their economic and psychological rehabilitation—rehabilitation in the fullest sense of the term.

This article was authored by Niranjan Dhar and was published in the 7 December 1968 edition of Swarajya.