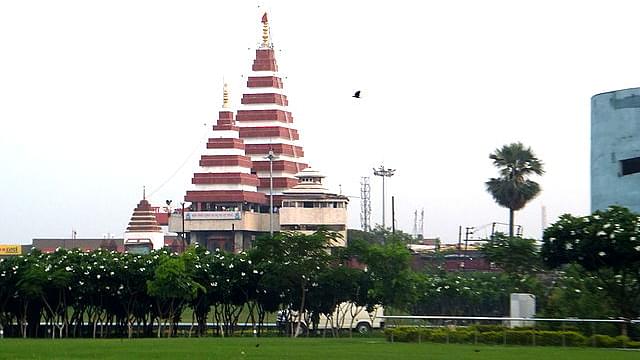 Two priests stand before flower-draped Hanuman idols, accepting offerings from devotees; plucking a flower from among those adorning the deities and adding it to the prasad as a blessing, before returning it to the devotees waiting with folded hands and bowed heads. The air inside Patna’s Mahavir temple reverberates with chants of Hanuman Chalisa and the Ramayana’s Sundar Kand, punctuated by the intermittent ringing of the temple bell. Most devotees leave after the priests hand them the prasad and lightly touch their heads in blessing; a few touch the priests’ feet.

The ritual is perhaps typical of most temples in India. What is distinctive in this particular temple is the identity of the priests presiding over rituals in the sanctum sanctorum. On the right, dressed in a lemon kurta and white pyjama, with hair neatly parted on one side is Dwarka Das, 35, and a Brahmin. On the left, in a white dhoti and matching uparē (shawl worn over the shoulders), with long, stringy locks of hair that resemble dreadlocks, is Phalahari Suryavanshi Das. He is 62 years old and a Dalit.

“A Dalit priest standing shoulder to shoulder with a Brahmin priest inside one of the largest temples, frequented by all castes, is symbolic in itself. It is a marker of the social change that’s slowly happening... at least here,” says Acharya Kishore Kunal, a retired Indian Police Service officer and former chairman of the Bihar State Board of Religious Trusts.

Priesthood among Hindus has traditionally been an upper-caste monopoly. At a time when Dalits in several parts of the country are fighting for the right even to enter temples, the presence of a Dalit priest in the sanctum sanctorum of a 300-year-old temple is remarkable.

Spending some time in the temple shows this is not mere tokenism. “Even the first time when I came here, I knew who the priest was. Brahmins, Kshatriyas, Vaishyas and Shudras... all are the same in front of god and this temple just reinforces that. Every time I come here, I make sure I touch Phalahari baba’s feet at least once,” says Vinay Aggarwal, a 50-year-old businessman who visits the temple every day on his way to work.

There is authority and fearlessness in Suryavanshi Das’s eyes, and confidence that shows that he has long been accepted by the people of Patna and is no longer the “other”. In fact, he says, there have been instances when even “Brahmin intellectuals” have come for his darshan.

“I am a Mahatma. I never thought of myself as a Dalit. When you become a Mahatma, you abandon all such worldly identities. Saint Ramananda said, ‘Jaati panthi pucchai nahi koi, hari ko bhaje so hari ka hoi (Let no one ask of caste or sect; if anyone worships God, then he is God’s).’ Upper and lower castes are not the creation of God. It is our creation,” says Das, who only eats fruits, hence the name Phalahari.

Dr Bhim Rao Ambedkar, who fought for the rights of the Dalits and other socially backward classes, vehemently criticised the Brahmin monopoly over priesthood in a speech titled ‘Annihilation of Caste’, which was written for the 1936 annual conference of Hindu reformist group Jat-Pat Todak Mandal but never delivered as his invitation was withdrawn due to the speech’s content. “The profession of a Hindu priest is the only profession which is not subject to any code... The priestly class must be brought under control by some such legislation... It will democratise it (priesthood) by throwing it open to everyone. It will certainly help to kill Brahminism and will also help to kill caste, which is nothing but Brahminism incarnate,” Ambedkar wrote in the speech.

In Bihar, the beginning of this change started on 13 June 1993, when a three-member delegation escorted Das as he stepped into the sanctum sanctorum of the Mahavir temple late that afternoon. The presence of the three priests – Ramchandra Paramahans, Mahant Avaidyanath of Baba Gorakhnath Dham and Mahant Avadh Kishore Das – indicated that Das’s appointment had received the stamp of approval. But behind all this was Kunal, who, as the caretaker of the temple, took it upon himself to change the social order and break the caste barrier. It was he who institutionalised philanthropy through the temple and slowly built a reputation for himself and the temple.

A Hanuman temple appointing a Dalit priest would ordinarily have resulted in some kind of resistance from the locals in a state where caste still remains relevant. But it didn’t. “This change was endorsed by three important priests of the time. And by then, people knew me as a true devotee. People trusted me. Had I come forward as a progressive liberal talking about change, I doubt I would have been successful in bringing about this change,” says Kunal.

India’s centuries-old caste hierarchy deemed those born in the so-called lower castes to be so unclean that they couldn’t even be touched. Untouchability was officially outlawed in 1950, but many continue to believe that touching some lower castes would make them impure. In this backdrop, Kunal’s dream of making caste irrelevant was not realistic.

Kunal personally visited Ayodhya’s Sant Ravidas temple, to request the head priest there to send a pujari for the Mahavir temple in Patna. Ravidas was a fifteenth-century Bhakti saint who advocated “inclusive coexistence” in a casteless and classless society. Dalits revere him as a saint and have built several temples in his name.

Kunal says he thought he would be lynched at Ayodhya or Varanasi for suggesting such blasphemy, but surprisingly nothing happened.

Initially, those at the Ravidas temple thought perhaps Kunal had some political aspirations and was doing this to get the Dalit vote. For this reason, they did not immediately offer any of their priests. But within a few days, Das was selected after he and several others were interviewed.

“It was an experiment that I was trying. I chose temples because I believe that in this country, you can become a Prime Minister being a Dalit, but it is nearly impossible to become a temple priest. Till now, I have installed Dalit priests in over a dozen temples here,” says Kunal, who has written a three-volume book titled Dalit Devo Bhav, which demolishes “myths” around caste discrimination in Hindu society and the place of Dalits in history.

There was some initial resistance. Some people warned Kunal about the possible repercussions of appointing a Dalit priest, but ultimately, it all went about smoothly.

“I never thought, nor had I ever heard about a Dalit priest in a temple where all castes would come till then, but I wasn’t scared. I was sure about my knowledge, and I knew I had the backing of so many respectable people. I was proud of myself. Even today, I am more revered than any other priest in this temple,” says Das.

His childhood memories centre around being forced to sit in the back rows of the classroom because how could a Dalit even sit with the upper castes? From there to seeing his name etched on marble plates outside temples he has inaugurated, life has changed dramatically for him.

The installation of Dalit priests in more than a dozen temples in Bihar does not mean caste has become irrelevant in the country or even the state, but it is definitely a small step towards breaking the barrier.

This article was first published on Mint and has been republished here with permission.