Arnab In Republic: How Much Will The Nation Want To Know Now? 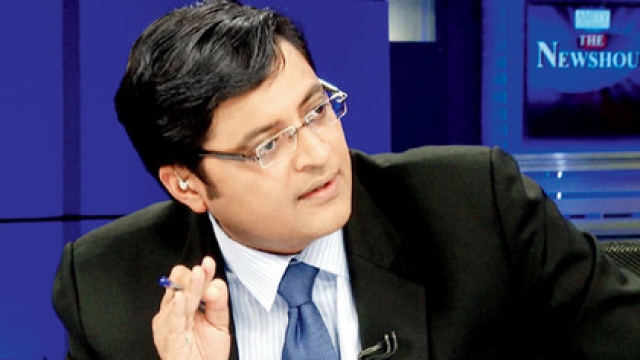 Billboards have sprung up across cities with larger than life portraits of Arnab Goswami announcing the imminent launch of his new media venture – Republic. The tagline goes “the nation STILL wants to know”. The ‘still’ has probably been inserted to get around the intellectual property claims of his previous employers (what was “intellectual” about the show – one might ask). The sleeping copywriter in me thinks,“The Nation wants to know MORE” would have been more appropriate though it could have landed Goswami in another copyright tussle.

Then there are these short “see you soon” postcard videos put on social media addressed to many of Goswami’s usual suspects ranging from Rahul Gandhi to Subramanian Swamy.

Finally, there was that famous Men’s Magazine cover featuring Goswami in a retro American rock-star outfit that gave much juice to his detractors for stewing him.

No doubt, all this is carefully crafted image management strategy at work. The over-arching picture it paints is one of a macho media star somewhat in the light of a Larry King or Tim Sebastian. That makes it easy for his critics and rivals to disparage him as a jingoistic megalomaniac.

However, the question that nags me is to what extent is this consciously cultivated screen persona and how much of it is the real Arnab Goswami?

I can at best call him an old acquaintance. He may not even remember me. Have met him a few times when he used to be in NDTV and, later, in his early days at Times Now. He was not yet a “phenomenon”. We had a common (non-media) friend, a rare Assamese resident of Lonavala. Their two families have been close back in Guwahati. But, I was neither a great fan of Goswami’s style of anchoring nor a regular viewer of his show, The Newshour. More than Goswami himself, I was put off by some of his regular panellists. Sanjay Jha, Saba Naqvi, Kumar Ketkar and the retinue of retired Pakistani Generals he would routinely invite on the programme. I sometime suspected that, he paid his studio guests to be punching bags. They reminded me of old Bollywood villain’s supporting casts, who were there only to be bashed up by the hero in the climax sequence.

The person Goswami I knew was polite to the core. We once had a lovely Hilsa lunch with the families at Oh Calcutta in Tardeo, Mumbai. I was most impressed by his extremely bright little son, whom Goswami unabashedly doted over. At the funeral of our friend’s father in Lonavala, dressed in a starched white kurta-pyjama, he was the quintessential family boy. Some years ago, the managing committee of The Calcutta Club requested me to invite Goswami for their annual debate. He readily obliged. Though I was not present there, friends told me he was extremely down to earth and did not throw any celebrity tantrums that they encounter with other star speakers. The club later on offered him membership out of turn, which – I believe – he did take up. A couple of years later, the club franchised the event to the media group he was working for then, who called Goswami to anchor the programme. But, conservative Calcuttans, used to the Oxbridge style of debating, rejected The Newshour format.

As an old media hand, I have held that, in order to break the hegemony of the Delhi based English news channels and their Lutyens’ cocktail circuit celebrity anchors, Goswami had to sharply differentiate himself. Whether by default or design, he did that brilliantly. He turned the apparent disadvantage of not being based in the capital in his favour by positioning himself as the proverbial ‘outsider’.

Every successful brand has to generate a strong ‘emotional surplus’. Modern marketing theory says creating a “Selling Provocation” (SSP) for oneself as distinct from the traditional concept of Unique Selling Proposition (USP), can do this. It is for this, I believe Goswami had to reinvent himself and develop a sharply contrasted, belligerent and aggressive brand image.

The same ‘positioning’ strategy may have influenced Goswami’s choice of subjects and his own stand on issues that were debated in his programme. But, somewhere along the line, did the persona take over the man? Whether the brand entered his body or Goswami morphed into the brand is what the nation would like to know now.

My own reading is Goswami crossed the Rubicon somewhere along the line pushed by his contemporaries, who were jealous of his success. The first hatchet job on Goswami was in a magazine that prides itself for its long form journalism. It presented him as a newsroom monster, a wannabe who was going all out to make a mark for him in the rarefied world of power journalists. As Times Now TRPs soared came the barbs like, “You don’t have to shout to be heard”. But, the real tipping point came when pulled off the coup with the Rahul Gandhi and Narendra Modi interviews during the 2014 elections and pipped competition to the post. That is when the barrage of innuendos started from the self-appointed guardians of liberal discourse.

Since, Goswami had by choice opted to stay away from Social Media he could only retaliate through his show. This only aggravated the hostility to The Rest Versus Goswami, forcing him to define his position more sharply to the right. One can empathise with him because this had happened to many of us, who were earlier firmly ensconced at the centre but were elbowed out by an elite with a proprietary sense of entitlement, fiercely protective of their turf.

It is the same group who seem to have been most rattled by Goswami’s comeback, there return of the Jedi as it were. This group had rejoiced at his ouster from the BCCL tent and many had secretly aspired for his job, which they thought was up for grabs. For me, Goswami’s exit from Times Now was just a matter of time. It might have got precipitated or accelerated by certain events but it was surely on the cards. No one can plan such an ambitious venture on the rebound in a short time. Surely, lot of groundwork must have been going on for sometime.

The envy is showing not only in barbs about Goswami’s new sartorial style but also not so subtle insinuations about the funding of his company. Curiously these pin pricks are coming from those who have themselves not shied away from posing for the cover of fashion magazines and have a lot to explain about finances of their own ventures and past record. But, I guess backbiting is par for the course in any profession where the foundations of success are built on the bedrock of ego and vanity.

Personally, I hold no brief for Goswami. Whether his new foray succeeds or not the future and his viewers will decide. But, one has to give him credit for being audacious, gate crashing into a cosy-club of news-traders, challenging the status quo and old paradigm of mainstream Indian journalism.

The nation is waiting to see what Republic has in store for them.