Maligned, Misunderstood, But Brilliantly Mathematical — That’s Why You Must Study Brahmagupta 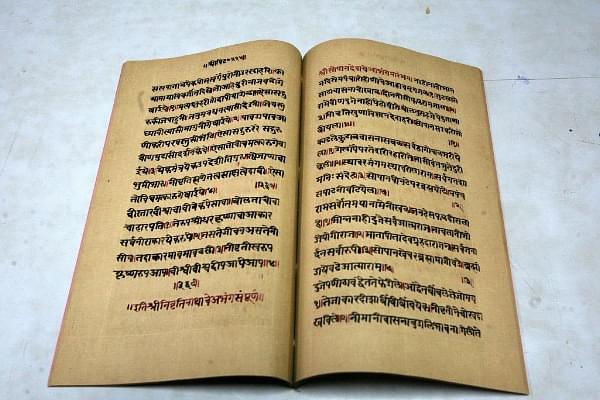 If there were a contest for who was India’s greatest mathematician, who would win? But first, who would be the candidates? Srinivasa Ramanujan? Aryabhata? How about Bhaskaracharya? Why not reach far back into Vedic times? Do Baudhayana or Apastamaba qualify? Should it be a public opinion poll? Does one have to be a great mathematician himself to judge?

Did any Indian jyotisha ever raise this question? Yes! Bhaskara, the 12th century mathematician famous for Lilavati and Siddhanta Shironmani, himself considered the greatest by some mathematicians, gave such a title – Ganaka Chakra Chudamani. Not to Aryabhata or Baudhayana, but to Brahmagupta.

Brahmagupta, who? What did he do? When and where did he live? Does he have an ISRO satellite named after him? Or even a bus stand?

If there is one severely neglected, least translated, often maligned, and barely known mathematician, or perhaps, mathematician, in Indian history, it must be Brahmagupta. Perhaps, it is because he used harsh language himself against Aryabhata, Srishena, Varahamihira and Vishnuchandra among others.

The most fervent criticism of Brahmagupta, often by self-proclaimed rationalists, is that he used orthodoxy to subvert the revolutionary concepts brought out by a more logical Aryabhata. These often stem from the false belief that a ‘secular and heterodox’ Aryabhata proposed a heliocentric theory, and that somehow, Brahmagupta derailed this with orthodoxy.

Translation: The planetary calculations (gruha-ganitam) explained (uktam) by Brahma have decayed (khilibootam) because of passage of a long (mahataa) time (kaala). Hence a correction (sphuTam) is presented (abhidheeyate) by Brahmagupta, son (sutam) of Jishnu.

This is the introductory verse in his work BraahmaSphutaSiddhaanta. I leave it to the reader to judge the orthodoxy of someone who announces that he offers a full book as a correction to the siddhanta of the Creator Brahma himself, because it has decayed with time.

The BraahmaSphutaSiddhaanta is a massive book, with 1,008 stanzas arranged in 24 chapters. It became the role model for most later siddhaantas. So big were these siddhaantas, that smaller texts called karanas and tantras were prepared for regular use. Brahmagupta himself prepared such a karana, called Khandakaadhyaka.

Brahmagupta advocated observation, and use of instruments. He dedicated an entire chapter to yantras, or simple devices to observe the sky. Most of these devices were made of wood, clay and such perishable material, not complicated instruments with gears and levers and large metal bases that we associate with European astronomy after Galileo.

Hence, we lack even significant artifacts of the this science. Several of his observations were improvements over earlier astronomers, including Aryabhata.

But his innovations in mathematics are what evoked Bhaskara’s admiration. Brahmagupta gave us the mathematics of zero, its addition, subtraction, multiplication and division. He explained negative numbers (which were written with a dot over them) and their properties. God may have created integers; Brahmagupta explained them.

We admire the giants of complexity like Gauss, Euler and Newton, more than the geniuses whose simple inventions wrought about giant leaps in ease. For example, the basic arithmetic signs we use were invented only just before Newton.

A Bija, by any other name

Today, we call unknowns “variables” and use English letters like x,y,z or Greek letters like theta, delta, omega to represent them. But the names of unknowns varied over centuries.

We also call a,b etc coefficients in an equation such as ax2+bx=c. Indian algebra perhaps suffered, never successfully coining a single term for this. (To be fair, nothing in Sanskrit ever seems to possess a unique name. But fortunately, unlike Mahavishnu, most concepts have less than a thousand names).

Brahmagupta himself referred to coefficients as samkhya (number) or gunaakara (multiplier). His commentator, Prthudaka Svami called it anka or prakriti.

Brahmagupta invented the equation (without these European operator symbols). He called it sama or samikarana. The two sides were called pakshas, itara paksha and the apara paksha, one written above the other.

He devised logical names for exponential powers above four, as pancha-gata, shad-gata etc. rather than isolated names like varga, ghana for square and cubes. With this insight, he also realized that only coefficients of like powers, which he called samaana-jaati, could be added.

He arranged equations so that like powers lined up. This picture shows Prthudaka Svami’s format for the equation 10x-8=x2+1 based on Brahmagupta’s notation.

What Lavoisier did for elements, and Linnaeus for species, Brahmagupta did for algebra.

Brahmagupta also came up with a general algorithm for solving quadratic equations, dealt with fractions of various types, cyclic quadrilaterals, used second order differences for sine calculations, and explored integer solutions for x,y for second order indeterminate equations of the type x2-by = k. He devised a method called bhaavana for solving these.

A number of jyotishas thrived in the centuries following Brahmagupta. No single book or school of astronomy was dominant or exclusive in India. Aryabhateeyam, BrahmSphutaSiddhanta and SuryaSiddhanta were used in parallel for several centuries, Bhaskara’s Siddantha Shiromani was based on BrahmaSphutaSiddhanta. The SuryaSiddhanta predating Varahamihira, and the most popular siddhanta of India, was anonymously updated with several concepts discovered by Brahmagupta.

The classical era was one of thriving innovation, and saw an explosion of manuja grantham : siddhantas, bhaashyaas, vartikaas (explanations of commentaries), karanas, tantraa, and novelties like vaakya-panchaangas, a surprising number of which have been preserved, edited, published and some even translated into English in the last few centuries. Criticism, correction, observation, refinement, innovation marked this period of several centuries and across various geographies.

An interesting aside for an economist, is the variety of currencies and coins (dinara, paNaa, kaarshapaaNa, puraaNa, svarNaa) and weights (pala, krosha) and measures (angula, hasta) discussed in the various books.

The primary focus is on astronomy, but every siddhanta discusses principal, interest, compounding, rate of growth, and such monetary calculations also.

The structure of his book is that first two or three stanzas in each chapter explain an algorithm or formula, and the rest of the stanzas are problems of that type to be solved by the reader.

His use of Jaina symbols, temples, methods of worship, calculations etc are singular hallmarks of the book.

Mahavira revels in several types of fractions: bhaaga (simple fraction), prabhaaga( fractions of fractions), bhaagaabhaaga (complex fractions), and so on. For example, one problem posed is below:

Translation: The man (purusha) who (asau) walks (gacchati) quarter (caturtha-bhaaga) less (unam) than six (shaTka) yojanaas in three (tribhi) and quarter (paadai) days (divasau), tell (kataya) how much (kim) he walks in a day (dina) and (yuta) a year (varsha).

The Lilavati of Bhaskara, author also of Siddhanta Siromani, is famous even to those unfamiliar with mathematics, as an example of beautiful poetry, and has a popular legend around it.

Like Mahavira, Bhaskara tossed in several examples from daily life to pose mathematics problems, and like Varahamihira, he reveled in his poetic talents.

Lilavati is the usually only mathematics book that Sanskrit dictionaries quote. It inspired innumerable commentaries, over centuries, translation into multiple languages and became the standard textbook of Indian mathematics.

He also gave correct volumes for surface area of a sphere. His metaphor of a net covering a ball (kandukasya jaalam), for sphere volume hints that he had stumbled upon the germ of the idea of infinetismals and calculus. But these fields would only develop in later centuries, in Kerala.

Bhaskara also introduced the concept of kha-hara (a number divided by zero) for infinity (not just the philosophical ananta (endless).

Bhaskara was also the among the earliest to provide proofs of some of his derivations, and not leave it to commentators, or only teach students. After brief explorations by Pingala and Varahamihira, Bhaskara also explored permutations and combinations.

By Bhaskara’s time, algebra had developed into an advanced state. He acknowledges that he built on the works of his predecessors Sridhara and Padmanabha.

Indian mathematicians were using irrational square roots for a thousand years and sines and cosines for several centuries before discovering negative numbers. The inspiration for negative numbers comes from commerce and the notion of debt, not any religious philosophy.

Just as the steam engine was invented a century before the much simpler bicycle, the history of mathematics is replete with examples of complex concepts being discovered before much simpler concepts.