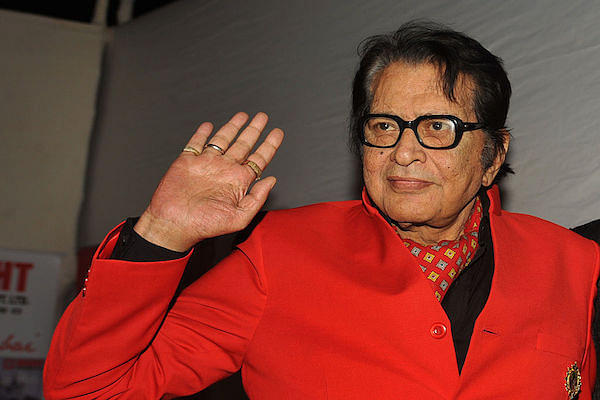 There was a time when Manoj Kumar was the first name that popped into one’s mind when one thought of films and 15 August.

Even today, when critics seem to brand every other film that has the tricolor unfurling or some character saying that they love India as “patriotic”, no other actor can even imagine staking a claim for the spot that Manoj ‘Bharat’ Kumar occupies.

Manoj Kumar was a star even before he donned the character that he would forever be remembered for, thanks to the hits of the 1960s— Hariyali Aur Raasta (1962), Woh Kaun Thi (1964), Anita (1967), and Gumnaam (1965). He was also the only star besides Dharmendra who survived the “tsunami” that was Rajesh Khanna in the 1970s. The patriotic genre that Manoj Kumar not only created but also mastered often overshadows his brilliance as a filmmaker or a storyteller. Even though Kumar might feel left out for not being seen beyond “Bharat Kumar” by fans and aficionados, he, too, like most of his fans wouldn’t trade it for anything.

The filmmaker within Manoj Kumar was an accidental discovery. He had dabbled with screenwriting during the making of Woh Kaun Thi where, much to the pleasure of director Raj Khosla, he rewrote some of his lines on the set. During his struggle to make it as an actor, Kumar often ghostwrote scenes for writers who had hit a block and it was this passion that saw him pen the script for Shaheed (1965).

Based on the heroics of Bhagat Singh, Rajguru, and Sukhdev, Kumar also directed a part of Shaheed when the original director S. Ram Sharma couldn’t handle certain portions. The film went on to win a handful of National Awards and Kumar met the then Prime Minister of India Shri Lal Bahadur Shastri at the awards ceremony. Impressed by Shaheed, the Prime Minister asked Kumar to make a film on his slogan “Jai Jawan, Jai Kisan” and, inspired by Shastriji’s wish, Kumar wrote the entire script on the day-long train journey back to Bombay. The film was Upkar (1967) and Kumar decided to direct it as well.

In many ways, Upkar is the penultimate patriotic film in the pantheon of Hindi cinema. Some might disagree, and would even have good reason to think so. But there has, perhaps, never been a film that captured the essence of patriotism as evocatively as Upkar. Popular Hindi cinema has had a tendency to see patriotism largely within the purview of gallantry in war. There is no denying that a soldier’s bravery and his or her love for the nation is what makes ordinary citizens sleep peacefully at nights but war films aren’t the best canvas to understand the spirit, the “jazba”, that makes a soldier. Army men and women are just like you and me yet they are a cut above. It is this element that makes them choose the path where they would die for their nation, if need be.

In Upkar, Bharat (Manoj Kumar) is a simple but proud farmer who believes that his motherland “desh ki dharti” produces gold and it also gives birth to exceptional men and women who would not bat an eyelid before making the supreme sacrifice for their brethren. This simple man is taken for a ride by his younger brother, Puran (Prem Chopra), who is sent abroad for higher studies. Once he returns, in the wake of the 1965 War, he becomes a black marketer to earn a quick buck.

The peace-loving Bharat transforms into a soldier to protect his nation from the enemy while Puran hits rock bottom. As one brother fights for the nation, the other swindles his own countrymen. When Bharat is found nearly dead on the battlefield, it it then that Puran realizes his folly. Bharat wins the war but loses his arm and Puran becomes his hands who will till the land and, if needed, will pick up the gun to save the nation.

In Upkar, Manoj Kumar created the perfect journey of a soldier where, rather than relying on simplistic battlefield glory, he shows Bharat as close to reality as possible. When India went to war with Pakistan in 1965, people like Bharat responded to Shastriji’s clarion call and those who couldn’t join the army donated gold, blood and even gave up one meal per day in order to ration the nation’s food grain. The manner in which Bharat metamorphoses into a soldier is also the way millions of Indian men joined the Armed Forces and they, too, could see themselves in the character. By the time Upkar released, Kumar had already played Bhagat Singh and there was an emotional connection that the viewer had made with the actor. Kumar’s earnestness glistened through the characters he played as the lead in the films, establishing him as a star and this trait was firmly present in the Bharat of Upkar, which then became permanently attached.

Perhaps Manoj Kumar’s role as “Shaheed-e-Azam Bhagat Singh” in Shaheed made his countrymen refuse to look beyond it, even after five decades. Perhaps it was the affection with which he responded to a request from one of India’s greatest Prime Ministers ever to make a film that could encapsulate an entire generation that endeared him forever. Or perhaps it was Purab Aur Paschim (1970) where he showed how being an Indian meant something else that made him our hero. Or it could be Roti Kapda Aur Makaan (1974) where the love for the nation is put before everything else or even his socially- awakened films like Shor (1972) that created the myth of Manoj Kumar.

Be as it may, Kumar’s greatest creation has been Upkar and “Bharat” that showed how patriotism isn’t just about dying for your country. Today, Upkar and Manoj Kumar’s brand of cinema, and even his kind of patriotism, might seem naïve to many but it still remains replete with humility and the pride of being an Indian.