Can The Judiciary Continue To Play Sovereign? 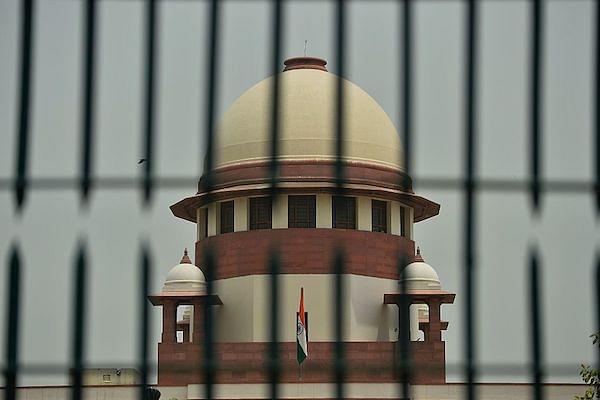 The Republic of India has witnessed the most curious developments over the course of the last 20 to 30 years with respect to its Constitution. One party’s domination of national politics came to an end, with another actively seeking to replace it as the hegemon. In the intervening years, a great ‘constitutional coup’ has occurred, subverting the Constitution and with it the powers of the executive and legislative branches. The ‘intention’ behind the coup was to ‘protect’ the Constitution, the perpetrator was the institution tasked with ‘protecting’ the Constitution. The coup was not planned, rather it happened gradually, with weak coalition governments unable to stop it. The Supreme Court of India has become through its own making, the most powerful among the three branches of state. The amount of control that the Supreme Court has asserted and continues to assert makes India a potential candidate for ‘kritarchy’ – rule by the judges.

Constitutional scholars of every hue and colour would rank this as a ‘constitutional development’ and an assertion of ‘judicial independence’. Judges of the Supreme Court would characterise the development of judicial activism in this country as the “obligatory duty against injustice(s)”. But in truth, the actions of the court have been self-aggrandising, positive consequences notwithstanding. The most egregious example is the case of judicial appointments. The Constitution of India lays out the appointment of the judges to the highest court under Article 124 (2):

“Every Judge of the Supreme Court shall be appointed by the President by warrant under his hand and seal after consultation with such of the Judges of the Supreme Court and of the High Courts in the States as the President may deem necessary for the purpose and shall hold office until he attains the age of sixty-five years: Provided that in the case of appointment of a Judge other than the Chief Justice, the Chief Justice of India shall always be consulted”. [Emphasis added]

The article of the Constitution could not be clearer – the appointment of the judges to the Supreme Court is done by the President of India in consultation with those judges of the high courts and Supreme Court that he may deem necessary. Yet, through the cases referred to as the ‘three judges’ cases’, the Supreme Court appropriated that power, in the quest for ‘judicial independence’. The court evolved the ‘collegium’ system out of thin air, a mechanism in which judges literally appoint judges. It was no longer in the domain of executive discretion, it became a judicial privilege to decide who their brother judges would be. With members of one branch of the state appointing their own successors – can one imagine a system so perverted, so inequitable and one-sided? Can any of us imagine, for a second, if the members of the Lok Sabha appointed their own successors? The collegium system is opaque, and perpetuates a system of nepotism and personal patronage. Concerns that a small group of elites are dominating judicial appointments, which were ever present, are given more substantiation because of the prevalence of the system.

The attempt by the Narendra Modi government to rectify the question of judicial appointments via the 99th Constitutional Amendment Act creating National Judicial Appointments Commission (NJAC) was struck down by the Supreme Court. After doing so, the court asked the central government for its ‘suggestions’ to improve the collegium system. It is quite clear that the collegium system cannot be equitable. Its constitution and existence is contrary to the basic conceptions of natural law. In most democratic countries, the appointment is made by the executive, as its prerogative. It would be best to remember the words of the architect of the Constitution, Dr B R Ambedkar on the question of Article 124:

To allow the Chief Justice practically a veto upon the appointment of judges is really to transfer the authority to the Chief Justice which we are not prepared to vest in the President or the Government of the day.

The intent of the framers when they drafted the article and the language is crystal clear, so is the fact that the NJAC was backed by both houses of Parliament and 16 state legislatures. A solution to the question of judicial appointments is essential.

The Supreme Court and high courts have expanded the scope of their jurisdictions considerably by their own volition. The constitutional courts in our country are now the primary instruments of governance, with every legislation and policy coming under judicial review. Take for example, the order of the Supreme Court banning liquor shops within 500 metres of a national highway. The order was amended more than once in view of the practical difficulty of enforcing such an order – to exclude municipal areas, hill states of Himachal Pradesh, Sikkim and Meghalaya, and then later on to exempt nine districts of Uttarakhand from the order.

In many matters, the executive’s discretion is circumscribed by the court’s decisions. In other cases, the executive is forced to enforce ‘directives’ that may be directly opposed to its own policies, forcing them to take action to undercut the order of the court. When the Supreme Court issued the ban on liquor shops, many states denotified highways to circumvent the order, an action the court promptly allowed. In December 2017, the Parliament amended the Forest Act to declassify bamboos grown in non-forest areas as no longer a ‘tree’. Why was this consequential? In the celebrated case of T N Godavarman Thirumalpad Vs Union of India (1997), the court banned the movement of cut trees and timber from the North East to the rest of India. Since bamboo was classified as a ‘tree’, the northeastern states were unable to utilise the natural wealth they were gifted with – the states hold 45 per cent of the global bamboo reserves.

The enlarged jurisdiction of the constitutional courts is also casting a shadow on economic development. One of the essential aspects for a free market economy is the rule of law, the ability of the legal system to resolve disputes in a time-bound and effective manner, to minimise the disruption of trade and commerce. Unfortunately, our constitutional courts seem to pay no heed to such considerations. The order of the Supreme Court on liquor shops near national highways is just one example.

In October 2017, the Supreme Court decided to ban the sale of firecrackers in the National Capital Region for a month, resulting in huge losses for wholesalers and retailers in the region, who had stocked up anticipating Diwali sales. The order was meant to see if the ban on fireworks will result in the improvement of air quality while if the court had consulted a study by IIT-Kanpur on the causes of air pollution in the region, it would have revealed that the primary cause was stubble burning in Punjab and Haryana. The list of questionable policy choices that the court has made goes on and on. A senior lawyer in the Supreme Court would seem to have more of a say in the policies of the executive than a union minister. After all, the decisions of the Supreme Court are final.

The problems of judicial lawmaking and regulation cannot be brushed aside. In a certain sense, they are undermining the very tenets of democracy and republicanism that are at the foundation of the country’s political and legal system. An executive reassertion is imminent, and long overdue, and the people of the country would be better off with it.