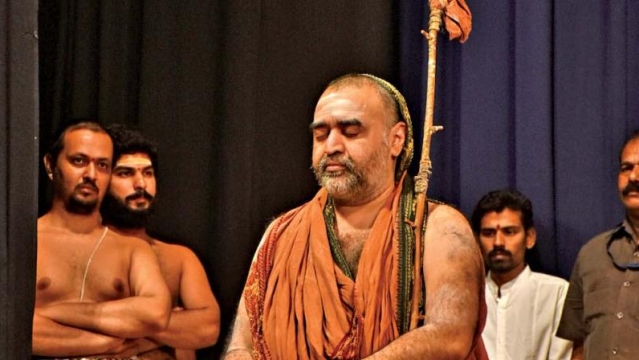 The editorial in Swarajya, published on 24 January 2018, on the controversy surrounding Vijayendra Saraswati Swamigal (“Bala Periva” to his devotees) triggered quite a reaction. As a well-wisher of Swarajya, I was perplexed at both the content and a lack of nuance in the arguments offered. I hope that this piece provides the other perspective.

I would like to address the issues both specific to the incident and the broader issue at large. His Holiness was accused of being negligent of the ‘Tamizh thai vaazhtu’ as he rose to his feet only for the national anthem, indicating a preference for it over the Tamil state song. This led anti-god demagogues to raise slogans of Aryan domination and link it to the political construct of the Bharatiya Janata Party (BJP) and its endeavours of the state at large. This also led people to talk about chauvinism and pontification and how the institution should be run per se. Here is where the argument goes for a toss.

First, the notion that his Holiness was ignoring the ‘Tamizh thai vaazhthu’ is itself an interpretation of high ignorance. He was praying throughout the Tamizh discourse with his eyes closed and displayed divine respect to the song as mentioned by the Mutt’s response here. Since the ‘Tamizh thai vaazhthu’ is an emblem of divine significance, he was immersed in prayer seated down, which is the Dharmic norm that all gurus follow. While I can understand agnostics questioning this, I’m amused as to why sensitive and culturally driven people would want to question this.

Second, the initiatives of the Mutt and its organisations towards Tamil and its growth have been articulated very well in this reader’s piece in Swarajya. The Mutt as an institution has promoted and nurtured the confluence of Tamil and Sanskrit in more ways than one. In fact, the event in question was the launch of a Tamil-Sanskrit dictionary, an intellectual exercise and not a political one, as alleged by conspirators. The promotion of importance of Hinduism to Dravidian culture is an important quest for the organisation as we understand it.

Third, this notion of Brahmin chauvinism is a misnomer. The Mutt and its devotees have had enough of these insinuations for far too long and it hurts to hear it even more. As devotees are well aware, people of any social background are welcome to the premises to attend the Mutt’s activities. Most people who visit the Mutt for the daily darshan are people who travel across the country, including people of all castes – the notion of barriers to entry and worship is a self-perpetuated myth to run the anti-Hindu narrative in the state.

If there was indeed the so-called Brahmin chauvinism, can one explain the ordeal that the Pontiffs had to go through for a decade due to a politically vindictive case without any merit whatsoever? Did “Brahmin superiority” help or assist them or even return their reputation when they were acquitted in the case? While it’s no doubt that the Brahmin followers are a majority, there is nothing institutional that prevents others from worshiping. In fact, on the contrary, it is one of the few places which promotes the idea of ‘lokakshema sukhino bhavanthu’.

Fourth, the focus of his Holiness has been primarily Vedic learning and he has remained apolitical. Devotees across the board would testify to this fact as this interview with Rajiv Malhotra illustrates. The core focus has been to promote Vedic learning across institutes. This includes providing Vedic learning to regular school-goers and leveraging the benefits for regular students across the board. An example of this is the initiative at the Vidyaniketan Public School in Bengaluru. It provides access to and the option of learning the Vedas irrespective of caste or creed. It’s these initiatives of theirs that makes them stand out and enables them to articulate a far wider vision than foreseeable earlier.

Fifth, alas, one needs to go beyond the rhetoric peddled by polarisers in the agnostic movements. It’s high time that sane, god-fearing entities (across religions) unite against these agnostics whose primary purpose is to polarise and be provocative. In this context, one hopes that we make logical analyses instead of a ‘breaking news’ type of rhetoric which serves no one’s purpose.

The association with the Mutt for its devotees is an experience – it has to be felt and it’s the core of our construct in more ways than one. The fact that I have mentioned his Holiness and not his name itself showcases the Dharmic respect that we give to gurus of such a stature. In fact, one of the greatest traits of a sanyasi is to remain oblivious to the noise and do their Dharma as ordained. Mahaswami did it when the D K movement was far worse in the 1960s; his Holiness, by not responding angrily to the provocations, is doing it now – that’s something we have to be proud of with our gurus at large.

One hopes that greater care and deliberation is exhibited while commenting on these subjects. Not for the devotees alone but also for the public who believe in the Dharmic causes that Hindus promote for the benefit of the world at large.