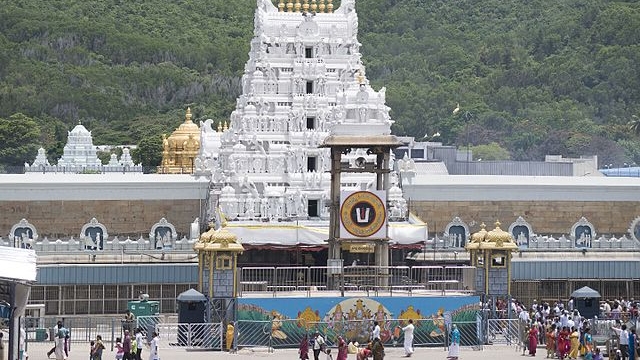 The Director of Archaeological Survey of India (ASI) wrote a letter to the Tirumala Tirupati Devasthanams (TTD) this weekend. It included a proposal to declare the Sri Venkateswara Temple as a ‘protected monument’ and, in effect, take over the temple.

Given the potential for political and social backlash, the letter was soon withdrawn by ASI, but not before the issue got politicised in the context of the current Bharatiya Janata Party (BJP)-Telugu Desam Party (TDP) relationship.

That the ASI, Hindu Religious & Charitable Endowments (HR&CE) Department, and other government bodies want to take over temples is not new. That they benefit financially from hundi donations, has also been established. That “Breaking India” forces are often behind this, has been discussed extensively. That taking over temples (and not churches or mosques) is fundamentally anti-secular, has also been discussed. That government/police officials steal and sell away temple murtis has also been established by courts.

In light of the changing socio-political equations and emerging awareness about the issue, the ASI may want to rethink its aggressive policy to take over temples. Here are a few good reasons why:

The Comptroller & Auditor General of India has said that the ASI has been “completely ineffective” in maintaining and retrieving India’s heritage. So much so that ASI has lost 92 monuments. Yes, monuments… walls, ceilings, floors… 92 whole buildings have vanished into thin air.

It may therefore bode well for the ASI to not take up the additional task of protecting more monuments when it cannot protect the ones it already has.

In a landmark judgment, the Madras High Court exposed the failure of various government authorities in protecting temple murtis. At various points, ASI, HR&CE, Endowments Boards, etc, had to be directed by courts to fulfill their basic functions.

The Indic Collective Trust has initiated legal action on the issues of temple freedom, on the Kerala Devaswom Board’s responsibility to maintain basic land records, on the right of devotees to have equal access to their deity (abolishing the practice of paying for VIP darshan), and many others. This is just the tip of the iceberg. Supreme Court lawyer J Sai Deepak has an endless list of instances of temple maladministration.

High Courts were forced to step in when the Andhra government dipped into TTD’s coffers, or when the Maharashtra government diverted funds from the Siddhi Vinayak Temple.

That it takes legal action to demand religious rights in itself is quite saddening in a secular country like India. To top it, we have government organisations trying to wrest control while many of these matters are sub-judice.

The last four years have seen a rise in visible affirmation of Indians’ religious beliefs. Citizens’ groups like Reclaim Temples, Bharat Punarutthana, etc, are building traction on their base and in their operations.

Temple archakas and purohits, on the other hand, are demanding fairness and equity in how they are treated. C S Rangarajan has been fighting the system to clear misconceptions about his faith, and fighting a lonely battle to recover murtis that were stolen from the Chilkur Balaji temple.

Acclaimed danseuse and heritage-activist Ananda Shankar Jayant says, “History belongs to its Geography”, to which I humbly add, “… and to its people.”

A recent outburst against a Christian administrator of TTD resulted in the Andhra Pradesh government cutting a sorry figure. The BJP Karnataka manifesto had to especially state the party’s views on temple-heritage-related issues.

Given the social renaissance and reaffirmation of right-to-faith, organisations like the ASI might want to follow a more collaborative approach, instead of trying to usurp a community’s heritage assets.

Through India Pride Project, we run efforts to trace, negotiate, and bring back stolen temple murtis. This is an arduous task needing hours of effort and energy. Not in tracing and tracking these murtis, though. That was done years ago. Most effort is spent begging the government to bring these back.

In my (very unfortunate) personal experience, the ASI has been unable to bring back heritage that is being offered by other countries. For example, almost two years ago, the United States offered 200 murtis to Prime Minister Narendra Modi in Washington, DC. Of these 200, the ASI has brought back only 11. Recently, Minister Mahesh Sharma said in Parliament that “there are no records available” with the ASI regarding the others.

Thankfully, the Directorate of Revenue Intelligence (DRI) has stepped in and has been actively taking interest in the issue. Many of the heritage mafia are now behind bars and/or are undergoing trial. This, however, does not take away from the fact that one department is having to step in when the other shirks its responsibility.

Despite all this, shockingly, over 2,000 murtis are still waiting to go back to temples.

Rajiv Malhotra (author and historian) has written extensively about “Breaking India” forces. The standard modus operandi allegedly revolves around the destruction of identity through the destruction of civilisational symbols, wisdom, and practices.

He led a movement around a petition when an Islamic university was proposed on TTD land. His exposés on the deep state and foreign funding of non-governmental organisations have attracted millions of views. What was under the carpet is now in the open.

Subramanian Swamy has often spoken about the constitutional right to religious freedom but its inequitable application. While most visible in the Ram Janmabhoomi case, his earlier work on temples, their administration, and protection is exhaustive.

Take, for example, the list of mosques built over temples (continuing on the work of Sitaram Goel). Or the case of the Padmanabhaswamy Temple, which was almost taken over by sarkari administrators, much against the people’s or the trustees’ wishes. It has taken Swamy’s legal action (or at least the threat of it) to keep the vultures away.

It is normal to find religious and political undertones to temple destruction. Whether it’s a Kader Basha looting temples in Tamil Nadu, or Congress Leader Ashton Sequeira (NSUI) robbing temples in Karnataka, or Islamic State funding terror operations though heritage crimes – the pattern is inescapable.

Religious institutions are best managed by the communities they were meant for. Selectively snatching control of temples (while leaving churches, mosques, etc, free of control) reeks of serious agendas at play.

Ideological issues aside, there are uncountable tactical failures in heritage protection when the government has taken over.

When it comes to protecting temples and the faith they represent, “separation of church and state” is not just an ideological preference but an existential necessity.