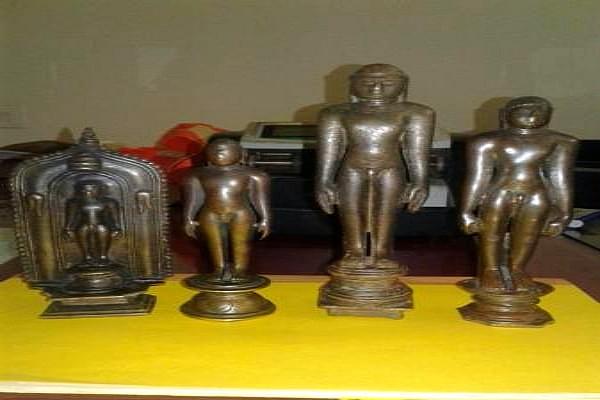 The Jain idols recovered by the police.

The Congress government in Karnataka is again under fire following the arrest of a National Students' Union of India (NSUI) leader, Ashton Sequeira, for allegedly trying to sell antique bronze Jain idols in Kundapura in Udupi, Times Of India has reported.

NSUI is the student wing of the ruling Congress party in Karnataka and Sequeira is the Dakshin Kannada district secretary of NSUI. He along with four others are now under Kundapura police custody after being held with the antique Jain idols.

The police, following a tip-off that some people are trying to sell antiques, nabbed the accused near the Kotalingeshwara Temple after they tried to flee the scene.

Sequeira and the others claimed that they found the idols while digging for a swimming pool, but on being interrogated by the police, were unable to answer convincingly and were hence placed under arrest.

Sequira has often been featured with several high level Congress leaders in Karnataka along with the Chief Minister (CM) Siddaramaiah.

This arrested accused is here on a poster with #IndiraGandhi, #SoniaGandhi & @OfficeOfRG.
FYI, @INCIndia has STILL not denied involvement, or condemned this Temple looting. pic.twitter.com/vZ3YNR0HZw

The Congress, however, has failed to condemn the incident till now.

Speaking to Swarajya, Anuraag Saxena, founder of the India Pride Project said, “Jains are a peaceful, orthodox people. Unfortunately, heritage-criminals look at this as a weakness. Hundreds of Jain temples have been looted, with marble Tirthankaras and Jinas commanding a premium in the illicit markets.”

Heritage conservation, especially antique religious idols, is one of Prime Minister Modi’s pet projects, with him having shown his keen interest several times. Several hundreds of idols have been brought back to India and restored at places they were stolen from at PM Modi’s outreach.

India Pride Project, works towards restitutions, advocacy and awareness-building programs to bring back India’s stolen heritage. While the current issue is under the lens because of the direct involvement of a Congress functionary, Anuraag tells that the organisation gets reports of such robberies every fortnight, if not ever week.

“On one hand, PM Modi is bringing back stolen heritage. On the other hand, some Congress leaders are stealing idols. The Hoysala and Kannadiga rulers built great monuments for perpetuity. These architectural wonders have been pillaged in just a few years,” Anuraag says.

“It is shocking that Rahul Gandhi has still not condemned this shameful act, by one of their own,” he added.