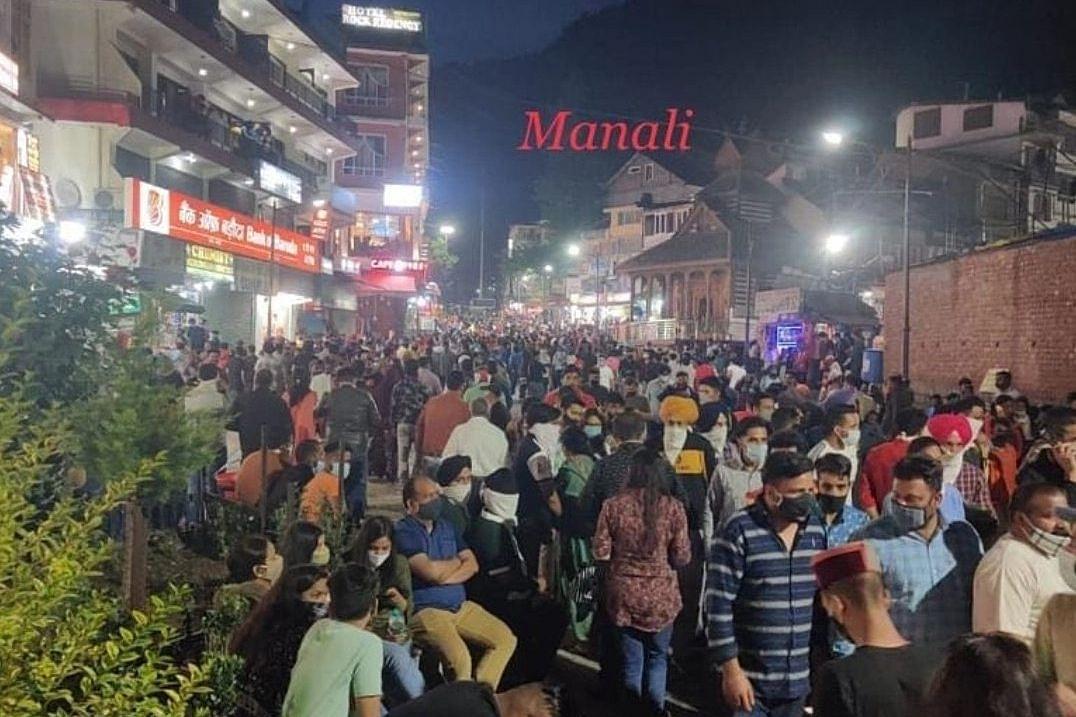 Over the weekend, pictures of Manali streets packed with tourists, reports of long jams on roads leading to hill states and hotels there running out of rooms generated huge outrage on social media as netizens mocked and slammed people for being highly irresponsible amidst constant warnings from the experts that the third wave of Covid-19 could be just around the corner.

‘We went from no beds in hospitals to no rooms in hotels real quick’, read one of the viral memes.

Clearly, this shows that panic has permeated deeply into the psyche of the larger population after the second wave than it did post the first wave understandably, due to bigger death toll.

At the societal level, this is a welcome development and one hopes that this remains the case until we have vaccinated at least half of the population fully.

But in this whole episode, one entity that hasn’t attracted even a fraction of outrage that has been dedicated to the tourists is the government.

While personal behaviour and individual responsibility can be decisive factors in preventing a third wave and the increased awareness among people is laudable, the government also needs to take responsibility for scenes that played out in tourist places right after the lifting of travel restrictions.

People have been locked inside their homes generally since March last year and especially for the past three months. Most have been personally impacted during this period — physically, mentally or both.

The future is more uncertain than ever. The fragility of life has dawned upon us like never before. It’s natural to expect people to run away for some good time at the first available opportunity and more so in the blistering heat wave season that’s making life hellish in the North Indian plains.

And, in hindsight, many wouldn’t have considered going to the hills if they knew it would be so crowded out there.

But this is not to say that people are blameless, especially those who have not got Covid-19 or are not vaccinated, for they are most vulnerable to not only get the disease but also to spread it further.

This is where the government comes in. From complete lockdown of businesses even when cases had dropped to pre-second wave levels, many state governments have gone into full unlock with minimal enforcement of social distancing measures and masks.

The Himachal Pradesh government also needs to take responsibility for jam packed streets in Manali and other places (with many not even wearing masks properly).

While one can understand the anxiety of states like Himachal, whose economy relies heavily on tourism to open up quickly, they cannot be excused for foregoing their responsibility.

They may think that tourists will go back and whether they are infected or spread it further is not their problem, but god forbid, if the third wave hits, their economies will again take a hit.

The situation in Himachal Pradesh could’ve been easily avoided by mandating that only those tourists who have got Covid-19 in the last six months (positive report certificate) or are partially/fully vaccinated will be allowed inside the state.

Additionally, the government could formulate regulations which allow only those hotels in tourist places to open whose staff is vaccinated.

In an article written in mid-May, this author had suggested some short-term and long-term steps we need to take to reclaim public life in the face of the challenges posed by Covid-19.

The very first suggestion was about the State’s responsibility to prevent super-spreader events and it needs restating here.

Until we jab half the population, there should be a complete ban on superspreaders — events or people. We know the virus infections are fat-tailed i.e. overwhelming majority of the infections are caused by very few events or people. First, the events. There should be tough restrictions on large congregations — protests, rallies, crowds in cricket matches, religious festivals, public transport (with caveats because we can’t really survive without it thanks to policies that have led to overreliance on this) etc. Campaigns can be digital-only with fake crowds clapping and making noises to netas' speeches in the background (like the IPL match telecast). People can take to technology (like Apple/Jio glass/VR headsets) to enjoy an almost real-life experience of being at rallies or in a cricket stadium or even attending classes. Protests can also go digital. The country can surely do without nuisances such as road blockage, rioting, etc. India can’t fight the virus mutants while allowing various groups to instigate a million mutinies on the side. Second, the people. All infected people aren’t the same. Some are more infectious than others. The State must focus heavily on quarantining the super-spreaders.

If the state fulfills its responsibility and strictly enforces its own guidelines and uses some sort of vaccination status as passports until we have a certain percentage of the population inoculated, there would be little need to blame the people for indulging in irresponsible behaviour.

It’s only a matter of a few months. The governments must remain vigilant if India has to avoid getting battered by a third wave.