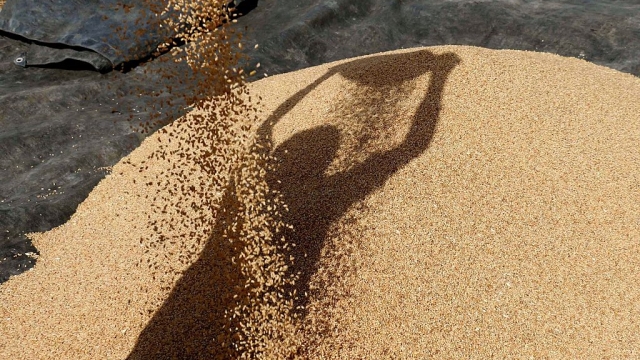 A farmer sorts through their wheat crop in a village on the outskirts of Beawar, about 184km southwest of Jaipur, Rajasthan. (-/AFP/Getty Images)

In the Union Budget 2017, the government announced its plan to make 50,000 gram panchayats poverty-free by 2019. It is undoubtedly a very good idea in the era of competitive federalism as it would set in motion a competition among gram panchayats to get rid of poverty.

Can one find a similar programme elsewhere in the country? Of course, yes. In Sikkim, which became the first fully organic state of India in 2016 and is the only open-defecation-free state in the country, the government has plans to become a poverty-free state in four years. Going by the track record of the Sikkim government, nobody would ever doubt that this ambitious programme would be accomplished. However, the plan of making 50,000 poverty-free gram panchayats across the country in three years invites apprehension and strong reaction, and raises issues.

One of the important issues concerns the criteria to be adopted for assessing a poverty-free gram panchayat, and also the architecture to be put in place for measuring and monitoring progress and outcomes.

Indicators can help monitor progress towards this ambitious goal. A sound indicator framework will turn poverty-free gram panchayats and their targets into a management tool to help develop implementation strategies and allocate resources accordingly. It can also help prepare a report card to measure progress and ensure accountability of all stakeholders.

There must be a framework for measurable indicators. This framework, which should have data disaggregation – by income, sex, age, race, ethnicity, migratory status, disability and geographic location or other characteristics, will be fundamental to the efficient and effective implementation of the indicator framework.

Poverty is multi-faceted and has many root causes. In this context, it is pertinent to explore whether poverty can be perceived in terms of a single quantitative or qualitative indicator alone.

Food insecurity can be both a cause and effect of persistent poverty. One of the sustainable development goals reads, “End hunger, achieve food security and improved nutrition and promote sustainable agriculture”. In the United Nations document, Zero Hunger: Why It Matters, it has been argued that “extreme hunger and malnutrition remains a barrier to sustainable development and creates a trap from which people cannot easily escape”. This document further states that “hunger and malnutrition mean less productive individuals, who are more prone to disease and thus often unable to earn more and improve their livelihoods”. Additionally, it is said that “with hunger limiting human development, we will not be able to achieve the other sustainable development goals such as education, health and gender equality”.

It would thus be desirable that food security be accepted as the main criterion for assessing a poverty-free gram panchayat. It has to be appreciated that food insecurity in rural India continues to be a stark reality for a large number of households. Despite several successful policy interventions, the number of malnourished children and adults remains alarmingly high in rural areas. The hungry are the poorest of the poor; they have limited or no access to physical and financial assets, little or no education, and often suffer from ill health.

Dr A K Nigam and others (2016) in their study, titled ‘Hunger in Gram Panchayats of Banda District’, have classified all the gram panchayats in the district into three categories: (i) food secure (poverty-free); (ii) food insecure without hunger and; (iii) food insecure with hunger on the basis of MFAST which is a modified version of FAST (Food Access Survey Tools) and anthropometric measurements and related indicators. The MFAST, with only nine indicators, can provide three types of food security status. The authors argue that mapping hunger would further enable zeroing down to the areas of concentration of deprived, hunger-stricken families. They also suggest that ‘Arc-view’ Geographical Information System software may be adapted for mapping food-secure (poverty-free) gram panchayats.

Food security, according to Nigam and others (2016), implies access, by all people at all times, to enough food for an active, healthy life. Food security includes at a minimum (i) the ready availability of nutritionally adequate and safe foods and (ii) an assured ability to acquire acceptable foods in socially acceptable ways (i.e., without resorting to emergency food supplies, scavenging, stealing or other coping strategies).

In our endeavour to make poverty-free gram panchayats, the greatest challenge and opportunity would be to ensure access to food for the people who are living in extreme poverty and are most affected by hunger. This approach would not only enable the government to move forward in the path of ending hunger by achieving food security but also simultaneously contribute in a significant way in achieving other sustainable development goals such as in education, health and gender equality.