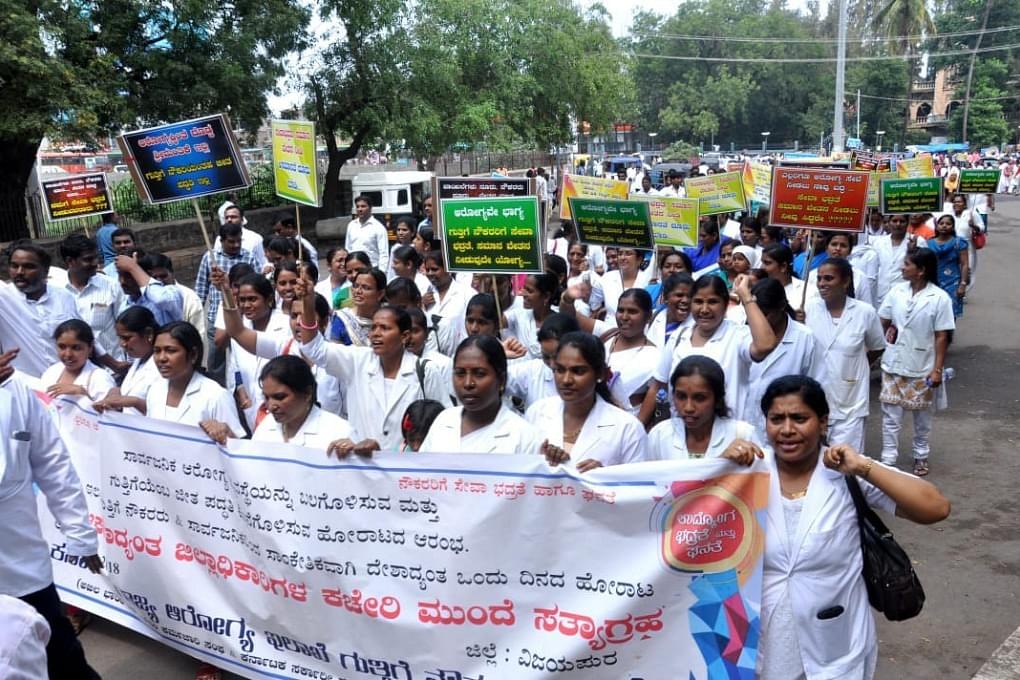 On 25 October this year, the Karnataka Health Directorate wore a deserted look despite it being a working Thursday. Health facilities in the state, including hospitals, worked with bare minimal staff that day as contract workers of the state’s health department went on a strike. It also led to a shortage of hospital staff that day.

The workers were demanding better treatment from the Union and state governments. According to Vasu H V, president of Karnataka State Health Department Contract Employees Forum, of the 55,000 health department workers in Karnataka, 30,000 are contract employees. “At least 22,000 of these contract workers are functioning under the National Health Mission,” he told Swarajya.

The contract workers are suffering as their jobs have not been regularised. More than that, they draw salaries that are lower than government employees in the department. These contract workers have to work even on government holidays. They are not entitled to maternity leave and what these employees get are only 15 days leave.

“Contract employees are compulsorily given leave on 1 April. Then, from 2 April to 31 March, they are given contracts. These contracts sometimes are given for three months and extended from time to time. Each time, the contract is extended, employees have to produce a Rs 100 bond that has various conditions attached for the extension,” says Ravi Kittur, Vijayapura district vice-president of Karnataka State Health Department’s Contract Workers’ Association.

“The problem for contract workers is that they are not sure if they will get extension. If their officer gets upset with them or writes an adverse report, they can simply be asked to go,” says Vasu.

The problem for contract workers with the Karnataka health department is that they are caught in a wrangle between the Centre and state. Both are pointing fingers at one another on regularisation of the jobs. “The Centre is saying it could increase its share of the funding in health projects and the state should recruit the staff. The state says it’s the Centre that should recruit,” said Kittur.

Most of the contract workers earn less than Rs 20,000 a month. This includes Ayush doctors too. Kittur says allopathic doctors get around Rs 40,000 but Vasu said that since there is shortage of allopathic doctors some of them get even more.

“On the contract, an auxiliary nurse midwife gets Rs 8,500 a month, while a staff nurse gets only around Rs 12,000,” says Vasu, adding that salaries for contract workers are delayed by three to four months. Critics of the government contract system say that a lab technician on contract gets only Rs 12,000 whereas a lower grade government employee gets a minimum of Rs 14,000.

A 2013 paper on “Public Health Workforce in Karnataka: Issues and Challenges” said that low remuneration, poor working and learning conditions and bureaucratic hurdles were some of the reasons for many deserving candidates not wanting to join the health department. It also called for a human resources policy on health, something that was part of the demand by the contract workers when they went on the strike.

“The disparities in working conditions between a government staff and a contract employee are quite telling. This discourages the contract workers from giving their best,” says Kittur.

Kittur says that over 75 per cent of contract employees are engaged in the HIV programme of the National Health Mission with nearly 20 per cent of them in schemes like prevention of parent to child transmission. “When these workers are trying to achieve the goals of the government in controlling HIV or improving health care system, it is only fair that they are given proper benefits,” he said.

In January 2017, the National Health Mission secretary asked all states to come up with a comprehensive human resource policy, but only three states - Haryana, Chandigarh and Delhi - completed the task. The state government’s lackadaisical attitude forced Manoj Jhalani, Union Secretary, National Health Mission, to remark that despite repeated advisories, the human resources policy has not been adopted.

“We are demanding that Karnataka adopt the human resource policy of Haryana, which gives the same benefits to contract workers as government employees,” says Kittur.

“We are demanding only a fair human resource policy,” said Vasu. Karnataka Health Commissioner Pankaj Kumar Pandey told the media that the state government had a copy of the Haryana policy and it would take a decision after going through it.

Rathan Kelkar, Mission Director, National Health Mission in Karnataka, also told the media that the contract workers would be given gradation points for serving the health department if the government decides to recruit more employees.

Karnataka is currently facing problems like spread of the swine flu. With the Centre launching the Ayushman Bharat healthcare scheme that provides an insurance cover of Rs 5 lakh, the role of the health workers is seen crucial in taking the government schemes to the people living in remote areas.

If health workers have to give their best to ensure health for all, they need to be taken care of properly. In particular, the contract workers at least need to be given benefits that government employees enjoy, say their union leaders.

With Karnataka facing problems due to drought or floods that has affected 80 per cent of the state, its finances are stretched. The state government has sought Rs 2,400 crore as relief from he Centre. In such a tight financial situation, it’s anyone guess if the contract workers in the health department can see any relief soon.