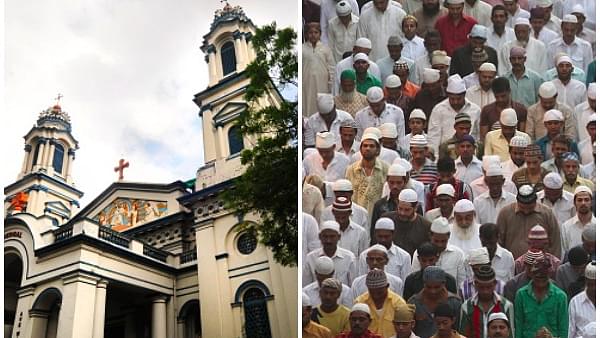 Some leaders of the Lingayat community in Karnataka have renewed their demand for their group to be considered as separate from Hindus. They want to ‘move out’ of the Hindu fold. This demand has been in existence from many decades and seems to have a co-relation to the recognition of non-Hindus as ‘minorities’ and the benefits granted to them as a consequence. In the past too, other groups, such as the Ramakrishna Mission, have demanded to be ousted from the Hindu fold.

It is a no-brainer that the demand to be considered as a non-Hindu has its basis in the institutional, legal and economic benefits associated with the tag of a minority, rather than cultural or religious reasons. Else, there is really nothing that a Hindu needs to do to move away from being one. The Hindu religion does not really codify what it takes to be a ‘Hindu’ nor does it define anywhere what would be considered blasphemy for a group to be thrown out of the Hindu fold. So, Lingayats could just declare themselves non-Hindus from tomorrow and continue their practices as it exists today.

However, what they are really looking forward to is an inclusion, by the government of India, through the National Commission for Minorities (NCM), into the official list of minorities. Currently Muslims, Christians, Jains, Sikhs, Parsis and Buddhists are the six religious minorities recognised.

When any government implements policies aimed at affirmative action, it is natural that there is a redistribution of resources between ‘preferred’ groups and ‘non-preferred’ groups. Typically the resources are economic in nature. The reasons for classifying certain groups under the preferred category are mostly social and/or economic. In countries like India, due to centuries of denial of opportunity and equality, many communities have suffered socially and economically. In order to address this problem, policies such as reservation have been introduced since independence (some form of reservations existed in British India too). In addition to reservation in education and jobs, financial benefits such as scholarships, easy access to finance and targeted infrastructure delivery are also usually provided.

With these benefits in sight, it is only natural that those communities which are in the non-preferred list would be keen to make it to the preferred groups’ list. In India, there exists two main categories of preferred groups. Category 1 is based on caste and the main groups under this denomination are the SCs, STs and OBCs. Category 2 is based on religion. Its members are known as minorities and the six religions noted above belong to this category.

Let us look at some factors which make this transition from the non-preferred to the preferred list easy or difficult. The focus of this post is on category 2 where the grouping is based on religion.

Benefits of getting redesignated as a minority

If one community enters the preferred group based on caste, the benefits primarily are economic and, to an extent, social. However, if one enters the preferred group based on religion, in addition to economic benefits, institutional and legal benefits are also granted. In fact, such institutional and legal benefits outweigh the economic benefits (otherwise extremely well-to-do communities such as Jains and Parsis wouldn’t figure in the list).

Minorities get absolute freedom to run educational institutions due to Article 30(1) of our constitution and few other sections. It is an undisputed fact that education is the key to social and economic progress of an individual or community. And unfettered rights to establish and administer educational institutions of choice is an extraordinary instrument available only to minorities to control social and economic development of not just their own group (religion) but those of others as well.

In addition to benefits mentioned above, minorities get a dedicated budget to fund socio-economic schemes based on religion. You can avail a handsome scholarship from grade I all the way to your post-graduation if you are a minority student. And the budget for these schemes only keeps increasing significantly year after year. There are schemes to help finance any entrepreneurial ventures that minorities want to undertake. Easy access to finance can be key to establishing businesses. And availing it can become easy if you are a non-Hindu.

An important point to note here is that, unlike schemes run for caste-based-preferred groups, the distribution of resources in schemes run for religion-based-preferred-groups is perfectly pro-rata. So, even though you can get clubbed with a number of other co-minorities, your share of the redistributed resource is fixed and guaranteed.

The government of India also runs several schemes (such as those under JNNURM and 15-point programs) where areas with high/higher concentration of minorities get special attention from an infrastructure development point of view. So, if you are a minority and are living in an area with a significant population of your religion, you stand a better chance of getting good roads, lighting, schools and so on.

Cost of not being preferred

One would therefore think that even in India, affirmative action could be a zero-sum game in the immediate term. However, for religion-based affirmative action, it is actually a significant negative-sum game for the community that is in the non-preferred group. Firstly, you of course lose out on the seats and scholarships that goes to those in the preferred group. Secondly, you are deprived of the institutional and legal rights that minorities are given. However, the death-blow comes from the fact that you are not just deprived of benefits but are subject to severe restrictions if you are a non-minority.

So, it is not just that you cannot easily establish and administer educational institutions of your choice but that you are subject to a myriad web of rules and regulations if you want to run a school or college. Run a school without a sufficiently large playground and you could receive a show-cause notice. Punish a rogue student who indulged in indiscipline in your college and your principal could be arrested. Refuse to admit a student who showed signs of being a complete academic misfit in your school and, well, your school could simply be shutdown.

An equally deadly scenario exists when it comes to another important institution of religious dimension. If you are a Hindu, your temple has most likely been taken over by the state government. Every single activity in the temple is subject to approvals from ‘relevant authorities’. As with every institution where government has a role, these temples too have to deal with corruption involving officials.

On the economic front, there is partial spite in case you are a Hindu and belong to a community that is covered under the caste-based preferred-groups policy. However, increasing discrimination there too is rendering the existing thin advantage slip-by. If you are a kid belonging to the OBC community, you can still get a scholarship from the government for your education but it will be an order of magnitude less than what a minority kid studying the same course can get (exact differences covered elsewhere in this blog).

If you are a Hindu and do not belong to any caste-based preferred-group, then there is a complete loss even on the economic front. A poor Brahmin kid is at the mercy of a state government to show some benevolence and grant it a scholarship with a meagre budget that can address perhaps a few tens of kids every year.

Therefore, the cost of not being in a preferred-group is chiefly threefold

-Total lack of freedom to run educational institutions and being subject to extreme government control.

-Takeover of your religious institutions by the government.

-Measurable impact on the economic and infrastructure front

The ease of ‘redesignation’

The above two sections where we looked at the benefits of being a minority and the dangers of being a non-minority make it obvious that communities currently under the non-preferred category will desire to make it to the preferred group. One factor that can dampen the enthusiasm for such ‘conversions’, usually, is the difficulty associated with such a redesignation.

However, in the present case, two reasons make even this redesignation process very easy.

1. The loose definition of who is a ‘minority’. There is only one requirement here – that of being a non-Hindu. All one needs to prove to become a minority and avail the numerous benefits is to somehow show how he is not a Hindu. Note: while this definition is actually true when looked at from a demographic point of view, the problem is the association of this definition with institutional, legal, social and economic benefits.

2. The vague, or non-existent, definition of who is a ‘Hindu’. Except perhaps the Brahmin sect, who are joined at the hip with Vedas, Smritis, Puranas and rituals, every other community can venture to claim they are non-Hindus, or at least ‘no longer Hindus’. Most Kshatriyas today are not into military or police service. Very few Vaishya communities are still in business. The remaining communities surely can cite the instances of them being denied equal privileges in the past to claim they were never ‘allowed to be Hindus’. Further, Hinduism as a religion, has never mandated any holy book, custom or ritual that every adherent must follow in order to be treated as an Hindu. This makes the task of detaching oneself from Hinduism even more simpler.

When it comes to becoming a minority, the key is to get the government to accept what you are NOT (Hindu) rather than make them realize who you are. Due to this – historical conditions, present economic situations, relative social position – none of these matter in the attempt to get redesignated.

Another side-effect of such a classification, with no socio-economic parameters being considered, is that it is safe to assume that there is no exit criteria for falling out of the minorities list. Once you are in, you cannot be out just because for e.g. your community grew into a very affluent one. If there were to be the case, there is simply no explanation for why communities such as Jains and Parsis have to be in the minorities list in the first place. Get in once, and stay there forever.

There are significant benefits to becoming a minority in India. And the reasons are not just socio-economic but much more significant centering around institutional control. If you are a community that has a significant stake in institutions (such as Lingayats for e.g) it simply makes no sense to subject oneself to the draconian measures intended for the ‘non-minority’.

Demand for recognition as a non-Hindu is therefore only natural. In all likelihood, as knowledge of the benefits of redesignation and dangers of existing designation become known, more and more Hindu communities are likely to demand the same status.

This article was first published in Secure #Core and has been republished here with permission.