How To End Minority Raj In India’s Education System 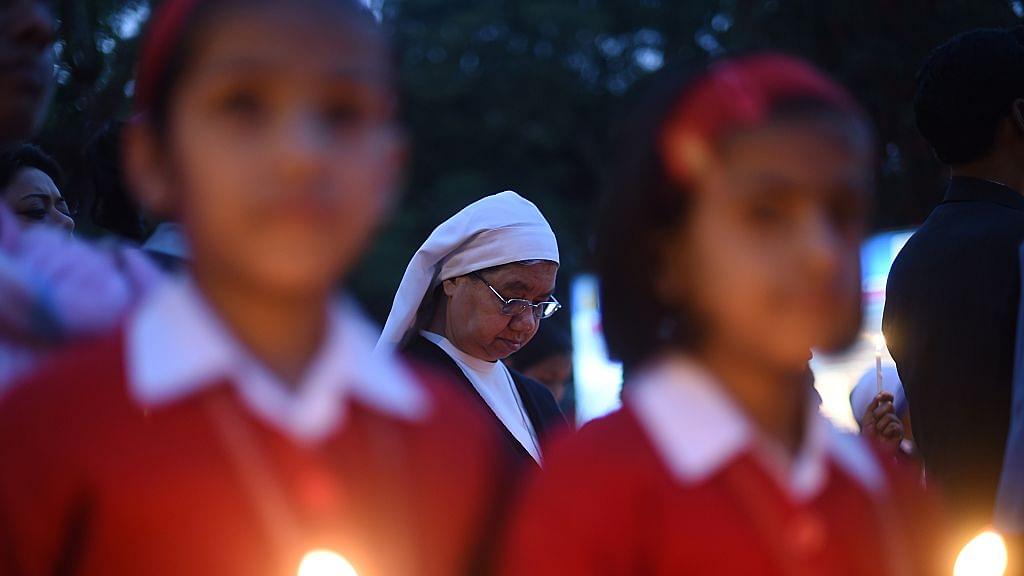 Students at a minority-run institution take part in a vigil in New Delhi. (SAJJAD HUSSAIN/AFP/GettyImages)

The act mandates that all private schools, whether aided or unaided, reserve 25 per cent seats for students from backward and disadvantaged groups. Infrastructure facilities such as playground, number of classrooms, library, labs etc are some other requirements that these schools must meet. Education institutions run by both religious and linguistic minorities are exempt from following this act.

Diagnosing the problem well, Girri said in his letter that minority institutions do not have to follow the RTE thanks to the 93rd constitutional amendment passed by the United Progressive Alliance government in 2006. This amendment added Clause 5 to Article 15 which reads:

Earlier, Girri had introduced a private member’s bill in Parliament to amend this clause to remove the words “other than the minority educational institutions” so that the RTE can be made applicable to all minority institutions.

Girri’s intention is simple and straightforward: there must be a rule of law and every one irrespective of caste, religion or language must enjoy equal protection of laws. But in education sector, there is a great divide where the law treats minorities and the majority differently.

The RTE has wreaked havoc since its implementation. On the one hand it has put enormous burden on non-minority private schools, forcing them to close down, and on the other, allowed minority private schools to flourish with minimum restrictions. And this divide was facilitated by adding Clause 5 to Article 15. Girri is doing the right thing by asking for rollback of these minoritarian laws.

Swarajya has been a critic of India’s minority-first education laws and is involved in active advocacy to usher in a new rule of law in this sector. Consequently, in the last three years, we have recommended various ways in which the government can amend the RTE or Clause 5 of Article 15. Unfortunately, the current dispensation hasn’t paid much attention to the education sector, let alone focusing on purging sectarianism in this area.

While one agrees that repealing RTE and overturning 93rd constitutional amendment must be the immediate goals, this author believes that not much would change if we do not tackle the gangotri of sectarianism in education, ie Article 30 (1) and the other articles in the Constitution where the word ‘minority’ appears. The word ‘minority’ is not officially defined and many have called for coming up with a definition of the same. But time for such tinkering is over. We must break free from these old divides of minority-majority and chart a new path.

All Minorities Are Relative

Even within a state, we find so many variations. A Muslim born in Malappuram district in Kerala is in majority but one born in Thiruvananthapuram is not. Supreme Court ruled that whoever is below 50 per cent in population share is a minority in the state. In Kerala, the share of Hindus is on the verge of going below 50 per cent, then who will be the majority? No one, according to the apex court’s definition!

As India urbanises, these definitions of minority-majority are going to get more complicated. As this Swarajya column had argued: All minorities are contextual.

When Muslims are not fighting the outsiders, they are fighting amongst themselves. Shia-Sunni divide is more pronounced than ever. Ditto for Hindus. They hardly ever come together as one unit. Most of the times, the competition is always going on between castes. A Shia in Kashmir is thus as much a minority as a Kurmi in Uttar Pradesh.

Why then did the founding fathers of the Indian republic chose to make that distinction and gave special rights to minorities? In all likelihood, it was done to give another layer of legal protection to minorities. If it was done to assuage their fears of majoritarianism, then that belief was ill-founded. Nonetheless, whatever be the reason, if we wish to drive forward, we cannot keep looking in the rear mirror. And for reasons elucidated above, we should get rid of minority-majority separation.

Additionally, unlike in the Western countries where minorities – religious and racial – were treated in inhumane ways, India has had no such episodes of religious persecution or racial discrimination against them. Muslims – the biggest minority community in the country – flourished and ruled over the majority for centuries. If anything, it’s the majority community that needs to be compensated for.

India’s first prime minister Jawaharlal Nehru also believed that minority-majority concept was alien to India and was injected by the British as a part of their divide and rule policy. Sadly, we have not only continued with this policy but strengthened its provisions.

All articles in the Constitution which have the word ‘minority’ in them must be amended.

First, as proposed by Maheish Girri, the words “other than the minority educational institutions” must be removed from Article 15(5).

Second, Article 30, which I call the gangotri of separatism in the education arena must be amended. Clause 1 of this Article reads:

(1) All minorities, whether based on religion or language, shall have the right to establish and administer educational institutions of their choice.

This should be amended thus:

All sections of citizens shall have the right to establish and administer educational institutions of their choice.

Clause 1A of Article 30 which says:

(1A) In making any law providing for the compulsory acquisition of any property of an educational institution established and administered by a minority, referred to in clause (1), the State shall ensure that the amount fixed by or determined under such law for the acquisition of such property is such as would not restrict or abrogate the right guaranteed under that clause.

This should be replaced with:

(1A) In making any law providing for the compulsory acquisition of any property of an educational institution established and administered by any section of citizens, the State shall ensure that the amount fixed by or determined under such law for the acquisition of such property is such as would not restrict or abrogate the right guaranteed under that clause.

When it comes to government providing aid to schools, they must be bifurcated into sectarian and secular schools depending on the type of curriculum they follow. Schools teaching only secular subjects like science, mathematics, social sciences etc should be classified as secular and those who teach religious subjects in addition to secular ones should be termed sectarian. Article 30 (2) will thus need to be changed.

It should be replaced with:

Article 28 (1) also deals with government aid to schools. It states that:

28 (1) No religious instruction shall be provided in any educational institution wholly maintained out of State funds.

This should be reframed as:

No religious instruction shall be provided in any educational institution wholly or partially maintained out of State funds.

However, we need to make sure that this article doesn’t exclude schools from teaching India’s rich ancient knowledge texts such as Upanishads, Vedas, Mahabharata and so on.

Therefore, the correct way to amend Article 28 (1) would be:

All educational institutions wholly or partially maintained out of State funds shall impart no religious instruction except which belongs to India's rich cultural past and found in its ancient texts, however, students (guardian in case the student is a minor) who wish to not receive it shall be free to do so.

The methodology of separating the schools in minority-majority buckets is past its sell-by date. The state should differentiate only between secular and sectarian schools while giving aid. It shouldn’t matter to it if the person administering the institution is a minority or a non-minority.

It’s time we put “the rule of law” and “equal protection of laws” above every other fundamental right. That’s the only way to put an end to minority-raj in the education sector.