Ladakh: How A Councillor From Chushul Is Raising Concerns Of The 'Second Guardian Force' In Villages Near The LAC 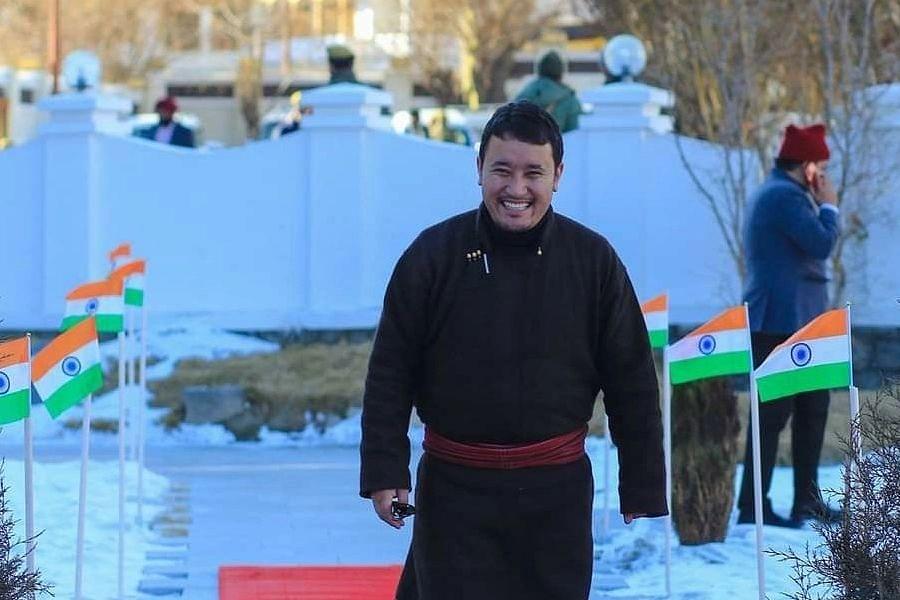 Earlier this month, Indian villagers in Demchok, near the China border, in Ladakh were celebrating the birthday of the Dalai Lama when they saw Chinese nationals displaying a banner that had something scribbled on it. Seemingly upset, Chushul Councillor Konchok Stanzin reacted to it in a post on Twitter.

His constituency, Chushul, is a border constituency of the Ladakh Autonomous Hill Development Council (LAHDC). Chushul is a forward area at the LAC and people living here are important role players in the protection of the country. They are considered the "second guardian force" after the armed forces. They are the eyes and the ears of the Indian Armed Forces.

Stanzin told Swarajya over the phone that he interacts with representatives of the central government and with dignitaries visiting Ladakh and his own constituency Chushul from time to time and makes them aware that the issues of the people need more attention. He has raised several issues related to the area with them, he adds.

He told Swarajya over the phone: "All developmental activities are looked at by the councillors themselves. Home Minister saab ko bhi maine letter likha thha even main khud ja kar bhi main unse mila (wrote a letter to the Home Minister and met him), I have raised several issues regarding the region as an independent".

He says that he met the Defence Minister and kept the issues of the people, region and other issues related to the LAC before him.

That more and much more needs to be done for the people and villages of Chushul seems the underlying feeling and belief in Stanzin's interaction with sections of the media.

Stanzin resigned from the BJP before the LAHDC poll last year. He later fought as an independent candidate in the LAHDC polls. This is his second term.

Aggression from China is a concern for the people of Chushul, Stanzin seems to reiterate in his interaction with the media.

One prime issue, he highlights, is related to the nomads in the region who depend on livestock. He says that the build up of tensions on the LAC, the resulting build up of the Indian Army to counter the aggression from China, is leading to difficulties for the nomads.

He told Swarajya over the phone that most of the people in Chushul are nomads and that they are facing difficulties in taking their animals for grazing. "Even areas where disengagement happens are now being declared no man's land. This is hampering the movement of nomads," he says.

Nomads, the locals believe, are also the first to inform about the Chinese movements in forward areas. Their movement getting affected after April 2020 is worrisome for the locals for a set of reasons related to security, livelihoods, lives and their access to and movement in the traditional grazing lands.

He adds that he tries his best to take the issues related to the LAC to the concerned people in order to highlight them, as most of the issues, he claims, have been unheard.

Issues faced by the people of the region are close to his heart. Among these are connectivity and infrastructure. Stanzin believes that lives of nomads and communities of people whose livelihoods and lives depend on grazing, need attention and improvement.

He also mentions that connectivity is an issue in areas near the LAC at times when there are "high level talks", as a result people see their own communication cut off and this leads to problems. He adds that it affects lives and the youth have to migrate because it hits their work.

Last month, Defence Minister Rajnath Singh was in Ladakh to inaugurate the Kungyam bridge in Rong valley of Changthang area -- on the Leh-Loma road. It is a bridge constructed by the BRO. Singh inaugurated infrastructural projects constructed by the Border Roads Organisation (BRO) in virtual mode. Stanzin adds that the newly inaugurated bridge is far from the "border" (LAC), but is important to the people in the region as it connects them to an important road of the BRO. He points out that the old bridge was in a bad state owing to the impact of the 2010 floods in Ladakh.

Singh also mentioned how the combined efforts of the Chushul councillor and the XIV Corps or Fire and Fury Corps has helped in making optical fibre reach two villages in the region in a period of seven days. He added that these are not small incidents for the villages and these are historic incidents.

Stanzin told Swarajya that with combined efforts of the Indian Army, and team work from constituency development fund and efforts from villagers, they were able to install a 2g mobile tower earlier this year. "Main yogdaan army ka raha" -- the main contribution came from the Indian Army -- Stazin adds.

He informs that two villages had connectivity and these villages are important owing to their placement in the region that sees direct aggression from the Chinese. He says that many villages still need optical fibre connectivity.

Singh added that the infrastructure was crucial to Ladakh tourism, economy and not valuable from the defence point of view alone. He added that when the roads and bridges come up, tourism naturally gets a boost and people living in the region find income generating opportunities.

Mentioning Stazin's efforts in his speech has sent a message from Singh and the Centre to the people of Ladakh. It could be marking the beginning of more focussed efforts from the Centre in addressing the concerns of the "second guardian force" and its emotion for our country with the help of the first and prime guardians -- the armed forces.