'Live' In The Time Of Corona: Intent over Content, Conscience Over Consent Should Decide The Rules For Media Coverage In A Pandemic 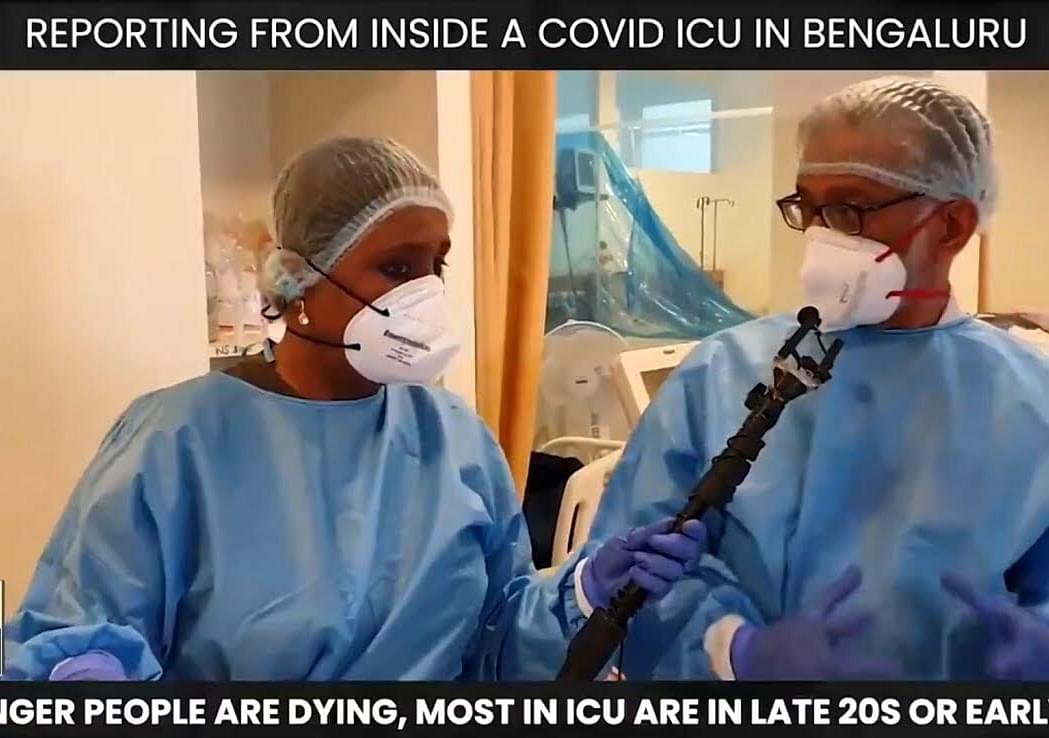 Bengaluru has been handling the pandemic well, be it imposing lockdowns before anyone else did, setting up war rooms, covid care centres or announcing support and compensation.

With nearly 30 per cent of the city’s 10 million plus population jabbed, it has shown the way to the rest of the country on how to run a vaccination program.

But isolated instances of some standalone hospitals in a suburb of silicon city that would make for negative press are time and again highlighted and much to the amusement of those feeding on the spell of death and disease around, are lapped up by international media.

Yet another instance was the ‘ground report’ by a senior ‘once-acclaimed’ journalist on her YouTube Mobile journalism channel MOJO.

The opening shot of a closure of a saline administered bandaged arm that zooms out and pans over the handle of the bed over to the vitals monitor and on to the face of the ‘reporter’ anchoring the video. And the issue as she herself states with the opening lines that voice over the intro shots is that they are ‘ inside the ICU of the HBS hospital in Bengaluru.”.

Donning a PPE kit, holding a mic, with the camera following her, she then has a chat with the incharge of the hospital asking him to talk about the ‘casualty figures, the fatalities‘ as they ‘walk through the ICU’ and heads to take a stroll around what is said to a critical care unit for those fighting for their lives.

The doctor who is enlightening the journalist is Dr Taha Mateen - the one who made headlines during the last wave too and that time again from the ICU of his hospital during what he called was a ‘virtual bloodbath’. Mateen, administrator of Hazrat Bismillah Shah Hospital in Shivajinagar in Bengaluru had appealed on camera seeking ‘Doctors’ to work in this Waqf charitable medical institution.

In July, this plea went viral, with Mateen claiming that this all endowed hospital with ’beds, oxygen beds, ventilators’ had no personnel as ‘cowardly’ Doctors were refusing to turn up. His claims had the backing of the local MLA Rizwan Arshad who blamed the government for inaction even as the capital city was ‘sitting on a volcano’.

In August, the hospital yet again was seeking funds and aid ‘from donors abroad‘ especially for the purchase of a CT scanner. In less than a month from the plea about missing doctors, this aid seeking 100 bed hospital claimed it had treated ‘250 patients successfully in the last one month’.

And now, in this video, that has left most ‘sensitive’ humans furious, asking the same question as to how could a ‘reporter with equipment’ be permitted inside the COVID ICU of a hospital, when protocol and caution both have prohibited access to even family members or attendants.

The reportage raises several questions on the part of both the journalist as well as the facilitating hospital - ethical, medical, humanitarian. Doctors, heads of chain of hospitals, and members of pandemic task forces opine, off the record, in unison that the said act was wrong on more grounds than one, but there isn’t legislation that prevents the same.

While individual hospitals and nursing homes have the autonomy to take such calls, most big medical institutions have internal protocol that prohibits the entry of even attendants into the critical care units handling Covid patients. There is no denying that the single line subject matter that a lot of data reports too have highlighted - that the fatalities this time around in the second wave and the new variants are the younger populace. But one fails to understand the need to be endangering their lives even further by this irresponsible act of ‘real reporting’ where

As a senior doctor shed light on the matter, this issue has three aspects to it - first that of endangering lives of both those inside as well as the ones visiting, second is the consent and thirdly the motive of the act or the purpose of shooting such videos. ‘The hospital can be taken to task for putting the lives of both the patient and the reporter in danger,’ he opined, but added that this wont fall under the purview of the DMA.

As far as consent is concerned, one is required to take express concern from patients and family members, which she, in a rebuttal tweet to the barrage of criticism has ‘clarified’ as having obtained.

Love how same RW trolls who did not notice our reportage from ICUs & funeral grounds in 2020 now do because its too close to home. I aint a newbie, consent is always sought & given before any patient or grieving family speaks. The many articles on me I wear as badge of honour

That begets another issue of the condition of those granting consent. Does conscience have any role to play while subjecting those battling for their lives to sign on a piece of paper for their cases, photographs and visuals to be used for neither clinical, academic or research purposes - which are three principal uses of clinical filming. As this paper titled ‘Clinical Photography and Our Responsibilities’ discusses, filming of patients for commercial purposes, begets various questions.

The medical condition and emotional distress of patients, their ‘inherent vulnerability’ of being in the position of a patient that may coerce them ‘overtly or camouflaged’ to consent, the financial condition and poverty of the patients -especially given that the said hospital is a ‘charitable’ one - that creates a power imbalance are all factors to be considered. Also photography for ‘commercial puposes’ that involve no tangible patient benefit, violate the code of conduct in ’letter and in spirit’, no matter how hard one tries to garb it as being in the ’larger interest of society’ and ‘educational’ or ‘informative and exposing’ systemic lacunae.

Easpecially in this case, where the hospital is a private one, the headline says what data also has been talking without being insensitive, and the state whose capital it ends up ‘shaming’ (intentionally or not’ was the first in the country to do what it takes, including imposing the Epidemic Diseases Act and clamping down movement, to prevent the spread of the disease in the state.

Like, they say, it is not just the what but the how and why of a story that matter. Pray journalists can keep agenda aside, and help fight the pandemic instead of spreading it.