Mao And Menstruation: How Discarding Tradition For Uniformity Brought Suffering Upon Chinese Women 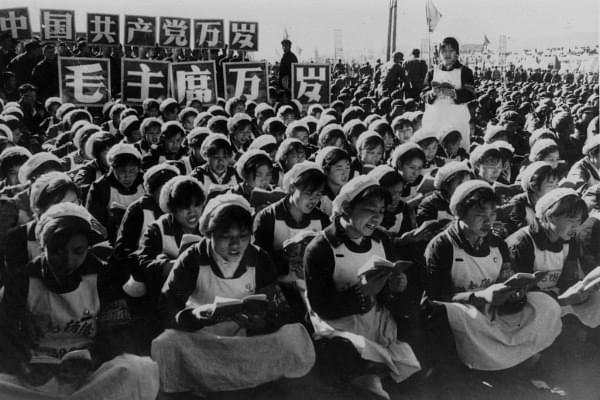 ‘Taboos’ surrounding menstruation in natural religions and cultures are considered ‘patriarchal anti-women superstitions’ arising from an oppressive ought-to-be liberated system. While these religions and cultures did develop concepts of pollution, purity, and isolation based on menstrual cycles, they also celebrated the cycle.

Many societies did have patriarchal tendencies in which menstruation was considered as polluting and as a kind of a divine sign of the inferiority of women. Yet the non-Western cultures also developed a system that gave women the needed physical and psychological rest through the customs they developed.

As society entered the era of modernity, these taboos naturally gave way to the removal of stigma associated with bleeding. So, the transition, though gradual, has been organic and peaceful.

A case in point is how orthodox Jewish women have transformed (or discovered the true meaning of) the ritual immersion necessitated by their sacred law, mitweh, by making it a celebration and renewal of life—though it can be argued as being anti-women. In this way, Jews and Hindus at large show how religious practices associated with menstrual cycles can be transformed and adapted as a celebration of life and make the other genders respect this feminine mystery of life. Today one can find many mitveh pool centres across many Western nations, including the United States. Feminists do not campaign to abolish them except if they are infected by the anti-Semitic virus. While one may hear a lot of rhetoric about the pollution and stigma of menstruation in medieval and even some ancient Jewish traditions, Judaism has adapted the healthy and spiritual significance of the practices while, at the same time, jettisoning the rhetoric of ‘pollution’.

One sees the same trends in Hinduism, though some Hindu-phobic feminists muddle the situation with support from virulently anti-Hindu media—ranging from the New York Times to the tabloid that has earned the nickname ‘Mount Road Mao’.

But then, proselytising monocultures from the West, both colonial missionaries and Marxists, seldom cared to understand these customs and saw them all as superstitions. They aimed to label them as oppressive obscurantist practices and uprooted them, wherever possible, violently. This resulted in great human loss and suffering, particularly for women. The Marxist Reich of Mao, for instance, brought misery and death to countless Chinese women by forcibly abolishing age-old menstruation-related civilisational taboos.

Professor and historian Frank Dikötter, whose book Mao’s Great Famine (2010) is considered one of the best books describing the famine faced by China in the period 1958-62, is among the few historians who were given access to original archive materials, significantly enhancing the authenticity of his work. Here is how he describes what the Chinese women faced, with the imposed uniformity of the Maoist and Marxist kinds:

Most of all, women were vulnerable because in a regime which mercilessly traded food for work every weakness led to hunger. In the relentless drive to achieve ever higher targets, at the furnace, in the field or on the factory floor, menstruation was widely seen as a flaw. Menstrual taboos of popular religion, which feared the polluting potential of women during their periods, were swept aside seemingly overnight. Failure to come out to the field was punished, the most common form of retribution being a reduction of work points for each day of absence. Some male cadres abused their positions of power, humiliating those women who asked for sick leave. Xu Yingjie, party secretary of the Chengdong People’s Commune in Hunan, forced those who requested a rest on the grounds of menstruation to drop their trousers and undergo a cursory inspection. Few were willing to undergo the humiliation, and many became ill as a result, several dying under the strain of labouring while suffering severe menstrual pain or gynaecological problems.

Reading between the lines, one can note that what Dikötter terms “menstrual taboos of popular religion, which feared the polluting potential of women” actually gave women the needed rest and a psychological rejuvenation. These “taboos” could have been adapted to understand the psychological and physical aspects of the periods of menstruation while removing the notions of pollution and purity. But Mao and his party did not desire that. Filled with hatred for their culture, they imposed uniformity, subjecting women to suffering. The results were devastating. More on the horror of Mao Reich by the historian:

Exhausted and hungry, women became so weak that they stopped menstruating altogether. This was common everywhere, even in the cities, where women were given some medical care. In the Tianqiao district, to the south of Beijing, half of all female workers in a metallurgy factory suffered from lack of menstrual periods, vaginal infections or a prolapsed uterus. As the only available washroom was always occupied, some of the women went for months without ever washing. ... The physical decline among rural women was so extreme that many suffered from a prolapsed uterus, meaning that the womb, held in place inside the pelvis by muscles and ligaments, collapsed inside the vaginal canal. Even without overwork and lack of food, weakness can cause the uterus to sag or slip out of its normal position.

And who came to the rescue of women? The age-old ‘superstitious’ and ‘obscurantist’ traditions that had developed a medical system to care for the women.

Many villagers also feared hospitals, and they resorted instead to local treatments. In Hubei, female healers used a variety of recipes, some handed down from generation to generation, to assist women suffering from gynaecological problems, heating and grinding ingredients into a powder that was smeared on to the vaginal walls and mixing medicinal herbs to cure menstrual disorders. Aunt Wang, as she was known in a village in Zhongxiang county, helped hundreds of women, her house often harbouring four or five patients being nursed back to health as her husband went foraging for leaves and roots in the forest. But such traditional remedies were rarely tolerated under forced collectivisation, and in the absence of effective medical care most women simply had to bear their condition and labour on.

So, Mao waged war not only against Taoists, Buddhists, and sparrows but also against the womb. After all, he had declared that if half of his population were annihilated, then the other half could be nurtured well—a Marxist Han equivalent of Hitlerian Aryan dream. Is there any wonder, then, that the intellectuals and the party who committed the monstrous and genocidal Mao, try to indulge in similar games in India—from the Jawaharlal Nehru University to Sabarimala? If they had not yet subjected the women of Kerala to the same humiliating murderous uniformity imposed by Mao, surely it is not because they lack the intention but because traditions like Sabarimala show them their limits in this last standing pagan Hindu nation.