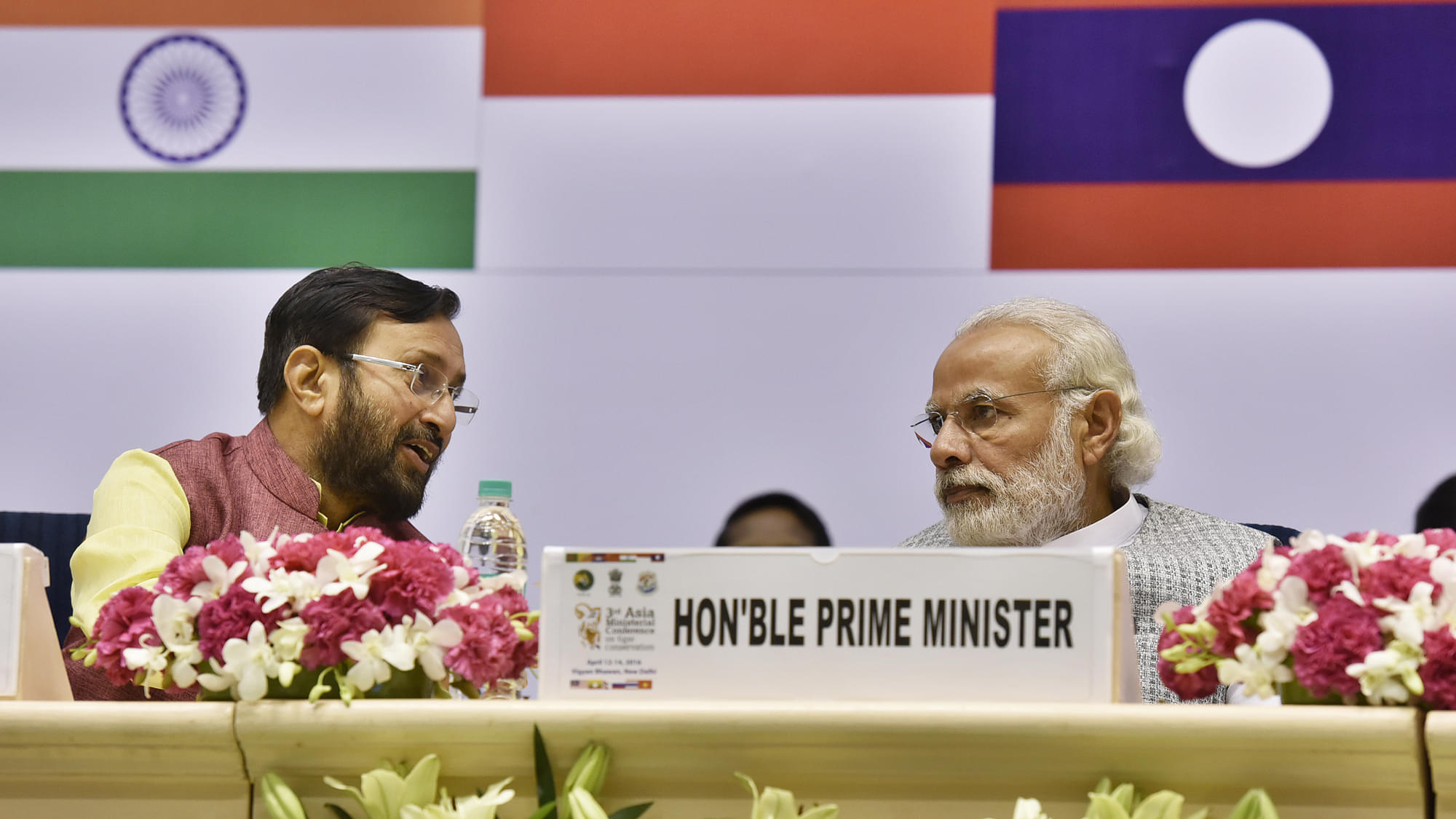 On 24 February, Union Minister for Human Resource and Development (HRD) Prakash Javadekar, in an interview to Rajya Sabha TV, announced the government’s plans to cut school syllabus by half for Class I to XII from 2019-2020 academic session. “School syllabus was more than that of BA and B.Com courses, and it needed to be reduced by half so that students get time for other activities for their all-round development,” media reports quoted him as saying. He was referring to halving National Council of Educational Research and Training (NCERT) curriculum followed in Central Board of Secondary Education (CBSE) schools.

As expected, this suggestion was received with much enthusiasm especially in the journalistic circles. Delhi Education Minister Manish Sisodiya, a former journalist no less, welcomed the move and congratulated Javadekar, before proceeding to thank him for accepting his suggestion, signalling in typical style of Aam Aadmi Party politicians, who hallucinate thinking the world revolves around them – that it was on his recommendation that this seemingly brilliant idea was being implemented. Various news reports hailed Javadekar’s move, calling it “big relief for students”, a “good news” that will reduce unnecessary load on innocent children being crushed under the back-breaking burden of heavy bags.

The Bharatiya Janata Party (BJP) leaders, who understand the underpinnings of establishment media, would automatically be suspicious of soundness of any policy action that invites praise from the usual suspects in the old media. But not Javadekar. He enjoys cozy relationship with them. Since Murli Manohar Joshi’s exit from HRD Ministry, it was only the elevation of combative Smriti Irani that caused consternation in the establishment media. Apart from that brief hiatus, Lutyens’ Delhi has enjoyed love-love relationship with the ministers in this all important department, be it Arjun Singh, Kapil Sibal, Shashi Tharoor or now Javadekar. Though Irani couldn't make much headway with her agenda, her energetic presence was enough to instill a sense of trepidation. Her intentions were terrorising enough. Now, prevails a sense of calm. No one expects anything better than customary file pushing and signing off on occasional policy proposals formulated by NITI Aayog or passed down by the Prime Minister’s Office.

In fact, the cheer from usual suspects and chattering classes on Javadekar’s move of halving the syllabus is reminiscent of Sibal’s cheap populist streak, which saw its heyday with nationalisation of 25 per cent of total seat capacity of non-minority private schools under the garb of Right To Education (RTE) Act. Another populist and disastrous measure was his declaration of war on meritocracy by launching an assault on the examination system. Results of those catastrophic experiments in education sector are now showing. The learning outcomes are at the same or poorer level than they were a decade ago, thanks to the ill thought out mandatory promotion or no detention policy. The RTE was supposed to usher in a socialist utopia, where poor children mingle comfortably with the progeny of the elite. Instead, the act has come to represent the high point of United Progressive Alliance’s religious bigotry targeting Hindu schools. It’s only lasting contribution seems to be increased workload of the honourable black robes, who are adjudicating on states’ dues pending to unaided private schools.

However, this streak of spectacular failures fails to knock some sense into those clamouring to crack down on rote learning using the same old discredited methods. The same class of people who lustily cheered on Sibal are lining up again, this time behind Javadekar in support of syllabus dilution. These wannabe midwives of next Elon Musks of the world do not get it that their interventions do more harm than good even if they mean well. As the aphorism goes, the road to hell is paved with good intentions.

The problem with the interventionistas (as Incerto author Nassim Taleb calls them) is that they do not understand that complex systems have second and third order effects. In complex systems, there are no simple cause and effect scenarios. Rather, actions have consequences and those consequences have other consequences and so on. The policymakers like Sibal and Javadekar think that once they waive their magic wand (no detention, syllabus dilution respectively), students’ stress will go away, their minds will be clutter free and then they can listen to birds chirping in the morning and enjoy other fine tastes of nature and life. But at what cost? Forget about alleviating any stress, no detention policy has caused national panic as the reality of pathetic learning outcomes dawned upon the government. As Taleb puts it lucidly in his latest book Skin in the game, “By the exact same reasoning, a doctor would inject a patient with “moderate” cancer cells to improve his cholesterol numbers, and proudly claim victory after the patient is dead, particularly if the postmortem shows remarkable cholesterol readings.”

The same fate of ‘no detention’ policy awaits the syllabus dilution move. The bags will become lighter but it comes at great national cost. Does Narendra Modi wants to go down in history as the Prime Minister under whom India wasted precious years and whose education policies proved an obstacle in India missing its demographic dividend? One highly doubts it.

We talked about second and third order effects. Consequences of consequences. How will this move of diluting NCERT syllabus play out? Well, for starters, parents (the tough ones) in metros will pull out their kids from CBSE schools and chose ICSE, IB or other alternatives. Then the schools themselves will follow suit by changing affiliation to other boards. One can be absolutely sure that there will be no dilution in the content learnt by children from well to do families. They will get home tutored or by Byju’s online or by someone else offline. It’s the kids from economically weaker sections, disadvantaged groups that suffer – categories the government claims to be making its core of core policies for. As American political philosopher Thomas Sowell once wrote:

There is nothing egalitarian about lower intellectual standards in our schools. Children from more fortunate homes will get higher standards in those homes. It is the other children who most need some outside source of the things necessary to realize their potential.

Apart from suffering from delusions of consequences of his own actions, Javadekar also seems to be a victim to bouts of cognitive dissonance. On the one hand, he wishes to lighten the load of children’s schoolbags by halving their syllabus because ‘we are only producing examination-giving students. This has to be changed’, on the other hand, he comments in the same interview that “without examination, there is no competition and no target. There must be an element of competition for better outcomes” while justifying the government’s move to repeal no detention element from the RTE. Perhaps, because the latter is a diktat from the PMO which he is simply following and regurgitating the government’s rationale. The former seems to his own harebrained scheme.

But why do vacuous politicians like Javadekar, Sibal and the mandarins in the HRD Ministry struggle to come up with anything better than such jejune ideas? Well, in simple terms, they don’t have a dog in the fight. They and their children, especially their children, are far removed from the consequences of their actions. They are not rewarded by the outcomes of their asinine ideas. They are long gone when the real results start to show. In short term, these outlandish but populism laden signalling help earn them praise in the media which is plagued and populated with dishonest, dishonourable and mediocre folks. These decision makers apart from having no skin in the game, also have no connect with ground realities. They have never seen the inside of a school in decades, forget having any experience of running one. If they knew they would understand that bloated syllabus is the least of children’s problems and trimming down will make matters worse.

Here is a thought: why not Javadekar and the cheerleaders of his syllabus trimming policy dilute curriculum for their own children and grandchildren and spare the rest? No one would care. But these same people would never go for it. Their kids will be left behind in competition. How conveniently they forget that our kids have to compete with the rest of the world, not just with those in India.

The 2014 mandate was not for doubling down on Sibal’s and Sonia Gandhi’s policies. The silent majority didn’t speak up so loudly and rewarded the BJP with the biggest mandate in 30 years to see more minorityism shove down their throats.

Many have tolerated Javadekar’s and this government’s acts of omission in cleaning up the Augean stables of sectarian mess stacked up by Sibal and company under the aegis of Sonia Gandhi and her pack of five-star activists from extra-constitutional think(less)-tank National Advisory Council. But his latest move to dilute syllabus is an act of commission. A grave one at that. We will ignore it at our own peril.