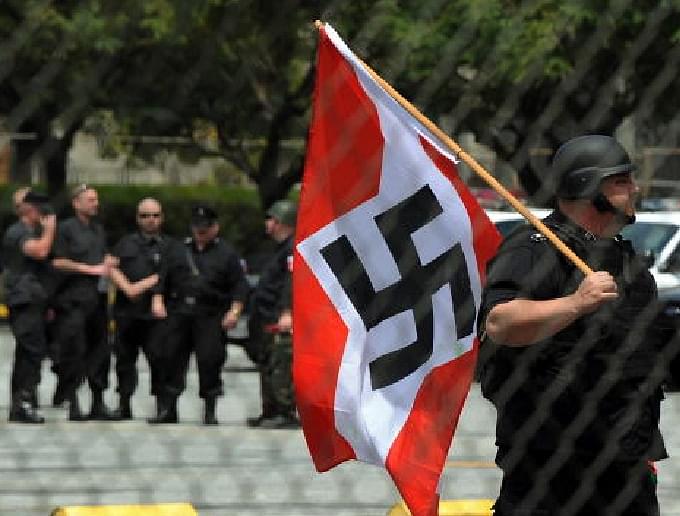 I’ve followed the fascinating case of Jonathan Weisman, The New York Times’s deputy Washington editor, and his conflagration with the legions of Nazis on Twitter. After he tweeted an essay about the rise of fascism in the U.S-an essay not unlike the one I wrote this time last year-he was dogpiled by a variety of crazy alt-right accounts, and bombarded by some deeply malicious messaging.

It might have been new to him, but for most curious internet users of a certain generation, this is nothing new. For Weisman, it came as a shock, and understandably. The tweets featured photoshopped images of Weisman being marched to the gas chambers, for example. They threatened him with vile anti-Semitic and hard-core racist rhetoric.

He knew that if he merely claimed that this happened, he would be met with incredulity by a mainstream audience. To make sure that people believed him, he spent the day retweeting the vile messages to his followers, as if to say: “this stuff really does exist.”

I know exactly what he means. After my first critical article on Trump last year, one in which I reported on an early campaign speech I watched, I was trolled hard too. You wake in the morning and find 100 notifications from people calling you a tool of the Jews, slamming you with racist cartoons, telling you that you have sold out the white race, and even calling for your death.

These are people who perhaps begin their trajectory with some harmless anti-PC racial banter, but it escalates to become a full-scale political ideology, one that eventually crowds out all concern for human rights and decency. What they have joined isn’t a real army with guns, but when you are targeted it is still emotionally draining and politically frightening to say the least.

It’s supposed to be. That’s why they do it. The point is to shake you up, and make you feel like you are being bombarded.When I told people about it, they didn’t believe it, or didn’t want to believe it. I too ended up screenshotting and posting in private messages, just to make the point that these vile movements do indeed exist. Even then, people doubt, probably because the sheer aggressiveness of this crowd is rather new in public life, at least in the US.

For most of my writing career, I’ve been called a corporate shill by the left, a puppet of the Kochtopus, an apologist for capitalist exploitation and frankenfood. None of the attacks from the left have matched the sheer vitriol of those from the supposed opposite side. These days, though I hold the same libertarian perspective I always have, I’m being denounced as a witting dupe of the rootless commercial class, a shill for the global banksters and usurers, a cuckservative (look it up), and probably a secret Jew myself.

At some point in last year, hundreds of bitter people left their 4chan caves and became Twitter mavens. It became the choice venue for the far right, which has developed its own internal signaling systems such as putting the signs ((( ))) around ostensibly “known Jews.” They use swastikas as avatars. They post Nazi-era caricatures of Jews. And the rhetoric is a revival of interwar hate that most people believe was vanquished from the earth with the defeat of the Nazis 70 years ago.

Not all the accounts are so blatant. Some prefer the dog-whistle approach in their own posting and merely retweet the more hard-core material. After a while, you can become very talented at spotting the members of this internet junta, and have it confirmed with only one or two degrees of separation from the more overt deniers and/or celebrators of the actual Holocaust (strange how deniers and celebrators hang out together).

Just as left socialism never seems to go away, no matter how many economic disasters it brings about, so it is with national socialism with a rightest tinge. In fact, it seems to be growing, both in Europe and the US, posing a serious challenge to those of us who consider ourselves classical liberals: hard opposition to the left and to the right. As I’ve written elsewhere, the world truly does seem to be dividing between authoritarians of the right and left, opposed consistently by a small but growing group of genuine liberals all over the world.

Now, to be sure, Jonathan Weisman was exactly right to wonder why Twitter puts up with this stuff. As he points out, banning such accounts is not censorship; this is a private venue that can set its own rules, same as a restaurant or movie theater. And Twitter does indeed have rules against “hateful conduct” that threatens people based on religion and ethnicity, as well as a policy on harassment that prohibits targeting people and inciting others to do the same. There’s no question that these accounts are in violation.

Why doesn’t Twitter act? Well, it sometimes does. After the Weisman articles, Twitter banned some 30 or so accounts. What happened to them? It’s pretty easy: they can easily come back again with another user name. In this sense, Twitter is, by design, much easier to game than Google or Facebook, both of which have much stricter policies. Sockpuppeting is a way of life here.

How does a digital venue decide how strict to be on these matters? It is all about the value of the platform for users. Sometimes tighter is better and other times it is not. In the case of Twitter, a main contribution it makes to global culture is its openness to all. You can find and see and hear just about anything. You can curate your feed. You can include or exclude. Sure, that takes a bit of work, but it is more than worth it.

When this started happening to me, I was initially disoriented and, I admit, a bit shaken. But then it struck me that Twitter surely has permitted a way to deal with this. Sure enough, there is a little gear that allows you to select a pretty little option: block. With the block, that account can no longer contact you or post among your notifications. Quite simply, you stop hearing from them.

I spent about a month doing this to trolls. Oddly, it is very satisfying. Someone tags you in a hate-filled post. With one click, you can blast them out of your curated universe. Once I got the hang of it, it became a game. Instead of getting mad, you just get even. Well, not really. But it sort of feels like it.

You know what? It works. After blocking about 100 accounts over the course of the fall, the problem almost entirely vanished. As it turns out, the nasty junta of hate-spewing freaks is not an army after all. In the end, we might in fact be talking about a few hundred accounts. Maybe it is more. And maybe after this article, they will all be back.

It might not be possible to make them all go away, but there is a way to reduce the influx and almost eliminate the stress. That’s not to minimize the alarming rise of fascism in politics here and abroad, but only to say that we are wise to distinguish between reality and digital illusion.

Blocking Is Betting than Beatings

And this is a much better option than leaning hard on Twitter to do more enforcement of its own terms of use. As much as these people disgust me, I would actually prefer to live in a world in which even deranged Nazis have access to widely available communication channels. I won’t invoke the right of free speech here because that’s not what this is about.

I will, however, say a good word for openness to all – and I mean all – points of view, access to media by all the world’s people (this is a wonderful miracle), and, above all else, the right of individuals to exclude through blocking. This is the way the opinion market should work. This is how we curate our own intellectual lives.

What we absolutely do not need – which Europe has tried to do – are government controls on what types of opinions one is allowed to hold and what books one is allowed to read. If you want violent extremism to grow, this is a great path towards guaranteeing that it will. Shutting people up by force is not the solution. The block button is far more effective than any censor.