One Year After The First Covid Lockdown, Hybrid Expos May Be The New Normal 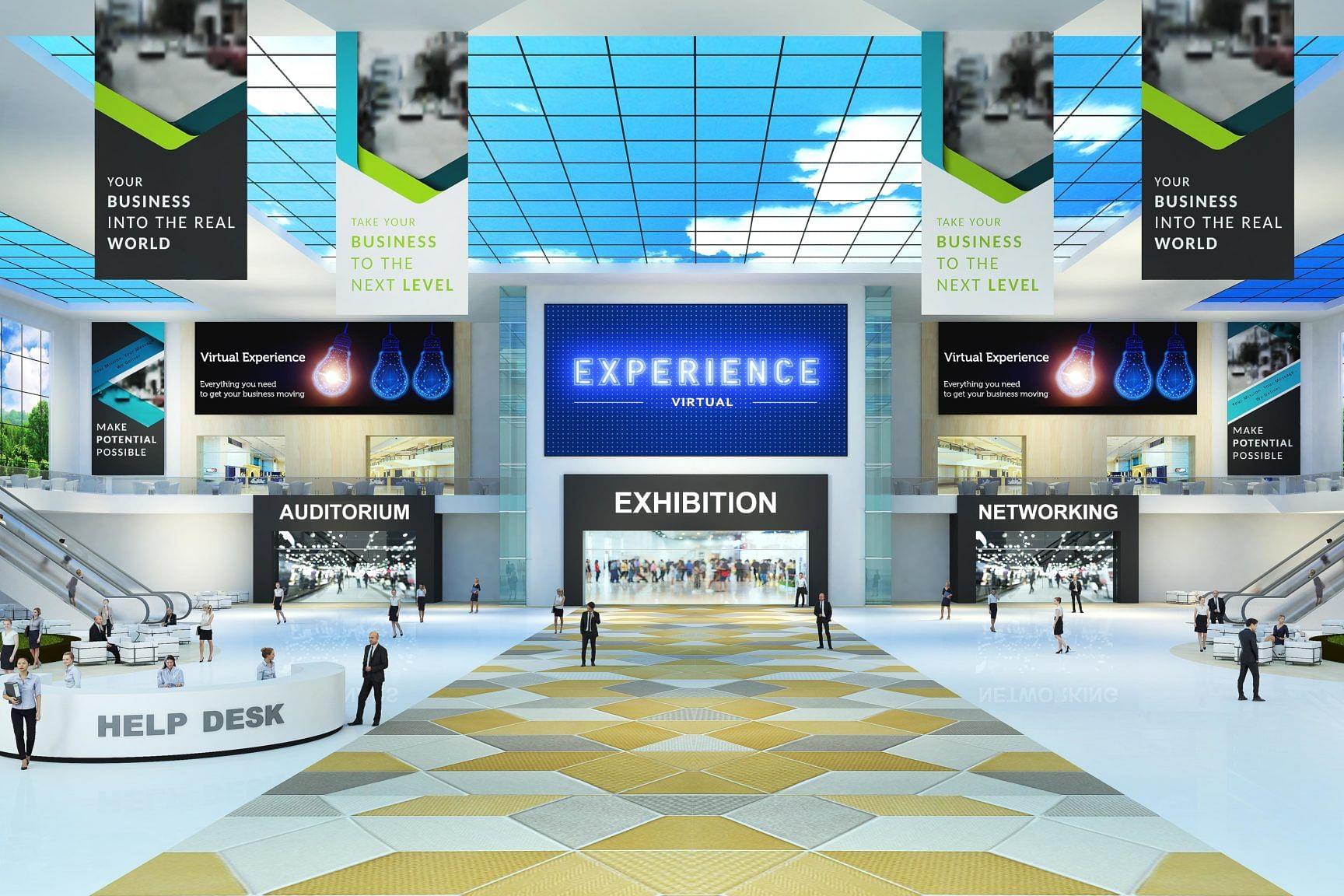 Virtual event portal reproduces the look and feel of a real expo. (DesignDesk)

In 2020, Convergence India, arguably the largest, and since 1992 the flagship technology expo hosted in the subcontinent, gave it a miss. After repeated postponements, it called off the event as the Covid-19 situation remained grim.

This is a combination of physical exhibition stands and seminars, with strict Covid and crowd control measures, plus a full slate of virtual, live-streamed digital webinars.

The three-day event kicks off on 24 March, coincidentally the day, one year ago, when India went into its first coronavirus lockdown.

The global pandemic and the consequent lockdowns world-wide, saw many of the best-attended international conferences and exhibitions cancel their events in 2020, or replace them with tentative virtual formats. They harnessed video conferencing tools like Cisco’s Webex or Zoom or their local equivalents as well as the live streaming features of YouTube or Facebook.

For both organisers and participants, such fallback options were so many work-in-progress — and a less than perfect experience.

Here too, Indian innovation was on display and quite a few event management companies — like the Kolkata and Mumbai-headquartered DesignDesk — quickly shrugged off the loss of physical business by creating a realistic virtual expo experience, combining clever graphics with 2-D and 3-D animation to give online ‘visitors’ the experience of ‘entering’ various exhibition halls and stands, ‘picking up’ a brochure or joining a live panel discussion.

Other India-based players in the exhibition space cannily anticipated a time when the world would inch back into physical events, but slowly. Founded by Mayank Agarwal and Vaibhav Jain, the Ahmedabad and San Francisco-based Hubilo, quickly morphed its portfolio to offer a virtual and hybrid events platform which helped businesses in hosting events.

The company which lists the UN, Amazon Web Services, Cognizant and Gitex (Dubai), the biggest tech expo in the Middle East, among its flagship clients, proved prescient in embracing the emerging trend of hybrid real-plus-virtual events.

Only weeks ago it won over $23 million in additional funding and rather than lose many of its 400-plus clients because of Covid-induced event cancellations, seems set to add to them.

In early 2021, the prognosis was still not good for hosting live events, which could well become Covid super-spreaders. For the first time in its history, the iconic CES, the world’s largest consumer electronics show, hosted every January in Las Vegas, US, went fully virtual this year.

For its inaugural Indian edition, organisers Messe Berlin, who host ITB, the world’s biggest business-to-business travel industry show in Germany, had announced a hybrid physical-plus-virtual event in Mumbai next month. But with Maharashtra remaining a high-risk state with inward travel restrictions in place, they have just announced that ITB India will be a purely virtual show on 7, 8 and 9 April.

But quite a few events slated for later in the year, have announced hybrid formats in the hope that travel to their respective locations will ease in coming weeks:

The advantage of a hybrid exposition is obvious: In the light of a physical event becoming unviable closer to the announced date — always a possibility as secondary waves of Covid are sweeping so many cities — it becomes logistically easier to shift the entire event to the virtual plane without affecting the content.

This logic, no doubt appealed to many international trade shows like the annual ConnecTech Asia (formerly CommunicAsia) which, after going all-virtual last year, will return to Singapore as a hybrid show between 14 and 16 July in its new avatar: AsiaTechX. The event has always had a good Indian presence with a country pavilion hosted by the Union Ministry of Commerce.

The crisis for the trade show business may well turn out to be a blessing in disguise as well as an opportunity to revitalise itself. The transformation of physical events into virtual and hybrid variants has now become a topic of professional discussion — and a management school research topic. That bellwether of business trends, Forbes magazine, titles a 15 March piece: “Six Ways Virtual and Hybrid events should evolve in 2021”.

It suggests: “Every crisis presents an opportunity, and the pandemic has provided organizations with the chance to improve their event offerings and how they connect with their audiences, even as events moved online. Amid the prolonged quarantine, many people working from home, want new ways to make connections... Organizations have it within their power to deliver on that expectation. In doing so, they can put to rest many people’s mistaken belief that virtual and hybrid events are not as engaging and compelling as in-person events. They can prove the opposite — that they can make them even more rewarding for attendees.”

“Hybrid events are the next big innovation in the event space,” concluded Business Insider India earlier this month. But the article raises a doubt: “As the relaxations continue, and people come back to their normal lives, the question is will digital continue to rule or will we come back to doing physical events?”

To soon to tell. But one hard (nosed) fact remains: Professionals have grown accustomed to attending major international events from the comfort of a PC or a desktop in their home: no hassle of applying for visas, facing hostile immigration personnel, grappling with a foreign language, paying steep hotel bills and dealing with taxi scalpers. But there are others — deal makers and service sellers — for whom the lack of one-on-one networking with potential clients has been disastrous for business.

And then there are those younger professionals, who for long have been inhibited from attending many a useful conference, because the delegate fee was so stiff. For a year now, they have enjoyed free access to dozens of renowned international and national events — all online, all for free. Ask them and they will say: “Virtual is the way to go, man—absolutely paisa vasool, in fact, phukat!”

If technology events went virtual in 2020, tech institutes did not lag behind. Having by statute to award degrees to its graduating batch of students before beginning a new semester, the International Institute of Information Technology, Bengaluru, broke with its two-decade old tradition and conducted its twentieth annual convocation, virtually via video conference.
The institute awarded degrees to 282 graduating students — PhD degrees, MTech and MS — linking them from their homes all over India, and flashing their degree certificates, with the director, Prof S Sadagopan and registrar, Commodore (Retired, Indian Navy) S R Sridhar, at the institute, the chairman of the IIIT-B Board , and co-founder of Infosys, ‘Kris Gopalakrishnan’, and Mindtree chairman N Krishnakumar, in their homes in Bengaluru, while the chief guest, Jitendra Malik, professor of EECS, University of California at Berkeley, delivered the convocation address from his lab in the US.

It was a model that many other IIITs and other educational institutions followed to differing ‘degrees’ (pun intended).