Pad Man: When The Cameras Rolled To Capture A Sanitary Revolution 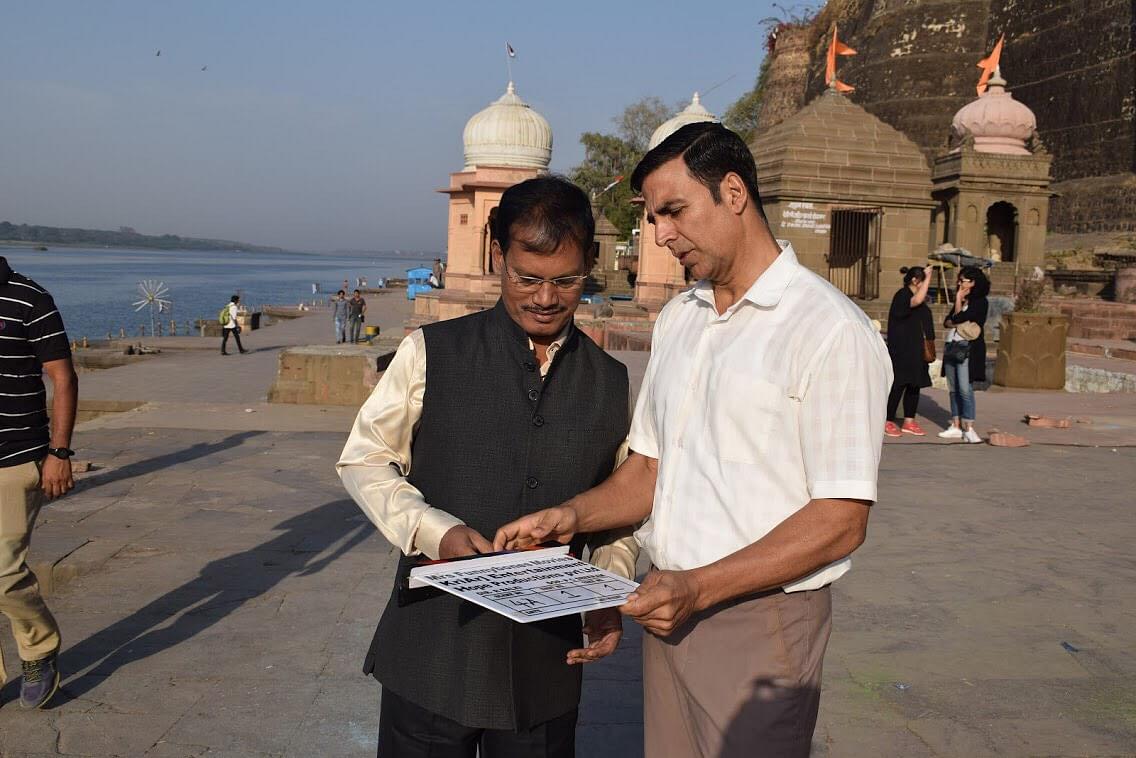 Akshay Kumar hands over the clapperboard to Muruganantham before the cameras rolled.

When a man cycled around the streets of his hometown in a suburban South Indian city, wearing sanitary pads connected to an experimental ‘menstruation’ piston, he was castigated as a pervert. But he didn’t stop until he fashioned those low-cost pads for the less-privileged women of India at the end of a 10-year research – a quiet social revolution that is set to acquire a Bollywood finesse.

The multi-billion dollar sanitary pad industry pales before its, perhaps, only ‘country cousin’ – a successful business model that was born out of Arunachalam Muruganantham’s earnestness to make menstrual hygiene accessible to every woman in the country.

“My mission is to generate 1 million jobs and make India a 100 per cent sanitary napkin-use country, where now less than 12 per cent of women use pads,” Muruganantham told Swarajya.

His innovation, which is not just a gift for women but also a source of sustainable livelihood for struggling families, is transforming lives and has inspired an Akshay Kumar-starrer Pad Man that will hit the cinemas next month. The biopic will be the first Indian film to be screened at the Oxford Union, the illustrious debating society of England.

The man behind the movie is Muruganantham. Wearing titles such as ‘menstruation Muruganantham’ on his sleeves, the inventor was nudged into making affordable pads to help his new wife, but was ostracised for adopting ‘weird’ methods to test the functionality of his creation. But the lone inventor persevered to build an industry that stands out for its modest business fundamentals, yet monumental contribution to social entrepreneurship.

If Muruganantham was, perhaps, the first man in the world to wear sanitary pads, Akshay Kumar is likely the first lead actor to take the message of personal hygiene to the people through a movie, in which the blockbuster hero would not be seen flexing his muscles but padding up a pair of pink panties, and wearing it too, cycling through the lanes of his hometown on the first leg of his experiment to produce a low-cost pad.

With the kind of mass appeal Akshay Kumar has, “what better way to get the message of observing personal hygiene to the people,” Murugananthan muses. He said how shy the actor appeared when he had to go about wearing the pad-lined clothing and gingerly checking for ‘bulges’. But the good-looking padman, sporting a neatly combed hairstyle, a pair of chappals and sober clothing, does just that, and with prowess, as a sneak peek of the movie revealed. He even manages to deliver several lines of mildly broken English on public platforms, sharing on silver screen Muruganantham’s popular, humour-flecked motivational talks to Fortune 500 and multinational companies, and TED audiences.

Among Time Magazine’s 100 Most Influential People, the inventor from the suburbs of Coimbatore city was driven to finding a solution when he was dismayed at seeing his wife resort to unhygienic methods to manage her period days as the family could not afford sanitary pads for its women.

“I saw my wife tip-toeing around with some rag in her hand, something which I wouldn’t use to clean my two-wheeler with,” said Muruganantham about the day the ‘affordable pad’ idea was probably conceived. “My first reaction was to rush to the store to buy sanitary pads, and when I returned with them bundled in a newspaper, my wife said that if we continue buying these pads, the milk has to be struck off the monthly budget list, and she didn’t favour that,” Muruganantham recalled.

It took a doting husband to persist with a simple cotton and cloth concept with the intention of thrusting pads, not diamonds into his wife’s palms, before it acquired an industrial dimension.

“My business model is simple. It helps produce world-class pads with a capital of Rs 2-3 lakh against a Rs 500-crore investment norm to run such an industry,” said Muruganantham, the 55-year-old proprietor of Jayashree Industries, whose achievements headlined several international publications.

A discreet supply chain sees the pads through to consumers. The pad costing Rs 2 and made of high-quality pine wood pulp is distributed through a grassroots method of door-to-door sales and retailing by word of mouth.

“We have set up 4,800 pad-making machines for individuals and groups in different parts of India with the help of about 1,000 volunteers, who joined the network by word of mouth.”

The machine, which can produce 1,500 pads a day, is simple to run and the raw material, available in paper stores, easy to source – in total, a business operation that is within the grasp and resources of India’s semi-skilled and unskilled millions.

But the road to invention was not easy. Muruganantham set about constructing the pad in 1994 and when it took shape in 2004, he needed volunteers to test it. “I first approached my wife and sisters, and then the medical college students, but they were reluctant and refused to help.”

Unfazed, Muruganantham adopted simple engineering, which took the place of the natural menstruation process, to test the absorption capacity of the pad but, however, through a seemingly bizarre method that forced his rattled wife to leave him, and the society to shun the ‘mad man’.

“I filled animal blood in a bag that was attached to a piston that would regularly pump blood onto the pads, which I wore.”

Muruganantham, who said he was certain his wife will return to him, which she did and is now a partner in the mission, was however happy to be left alone to carry out his research in his ‘lab’ – a little room in the backyard of his house, where the first low-cost pad would be produced off a machine that brought the inventor and Microsoft co-founder and billionaire philanthropist Bill Gates together in Seattle, US. The meeting caught the imagination of the media, which ran stories headlined, “Bill Gates spends one hour and 20 minutes with India’s rural innovator”. Muruganantham was impressed by the Gates’ eagerness to learn – to know all about the frugal formula of making sanitary pads.

“He was certain I could teach him something.”

The potential of this creation to touch the lives of every woman in this country had Bollywood knocking on the Padmashri award winner’s doors. In his own words, “I was told a lady called Twinkle was insisting on talking to me, but I didn’t know her then, and the matter ended there.” It was a year-and-a-half later that he met Twinkle Khanna, Akshay Kumar’s wife, and who would become the producer of the film, in London. “She convinced me about her idea to make a movie on my life and I agreed to sell the rights for it,” he said.

He is clear about why he chose a Hindi over a Tamil make. “A Hindi movie would have a pan-India reach and I didn’t want to restrict this idea to a region.”

Playing Muruganandam warranted several visits by Akshay Kumar to his home in Coimbatore. “Akshay enjoyed meals of sambar-rice-pappad my wife Shanthi cooked,” he said, and over which the actor got under the skin of his character and soaked in the environment that gave birth to the revolutionary business idea. Muruganantham spent several days at many locations where Pad Man, also starring Sonam Kapoor and Radhika Apte in leading roles, was shot, and assisted the crew.

“Akshay and I interacted for a year and a half,” said Muruganandam, who doesn’t know Hindi. With director R Balki, who is Tamil, helping with some crucial communication, the two exchanged ideas, experiences in English.

Twinkle’s maiden production venture, Pad Man, will be the success story of a social entrepreneur, who brushed aside patenting his product and threw open its production to anyone who wanted to earn that extra income to lead a decent life and the resources to send their children to school.

The business model is evolving, encompassing within its fold counselling for and information to women and their families, said Muruganantham. Manufactured by grassroots entrepreneurs, the pads are known by more than a 1,000 brand names and sold under a marketing strategy called d-tailing where sellers ‘detail’ its use and merits to women, who are otherwise exposed to the risks of serious infection. At the same time, it dispelled taboos associated with using pads helping adolescent girls to not only shake off the stigma and return to school but also find reassurance in the new-found self-esteem.

His daughter Preethishree is in Class IV, and wants to be an inventor herself. “She does seem to understand all the fuss around me,” the father, who is preparing to watch the star-studded premiere of Pad Man, said with a smile.

“Big man strong man not making country strong…. woman strong, mother strong, sister strong, then country strong,” Akshay Kumar says with zest in the film, capturing the essence of an endeavour to empower women in one of the most exceptional ways.