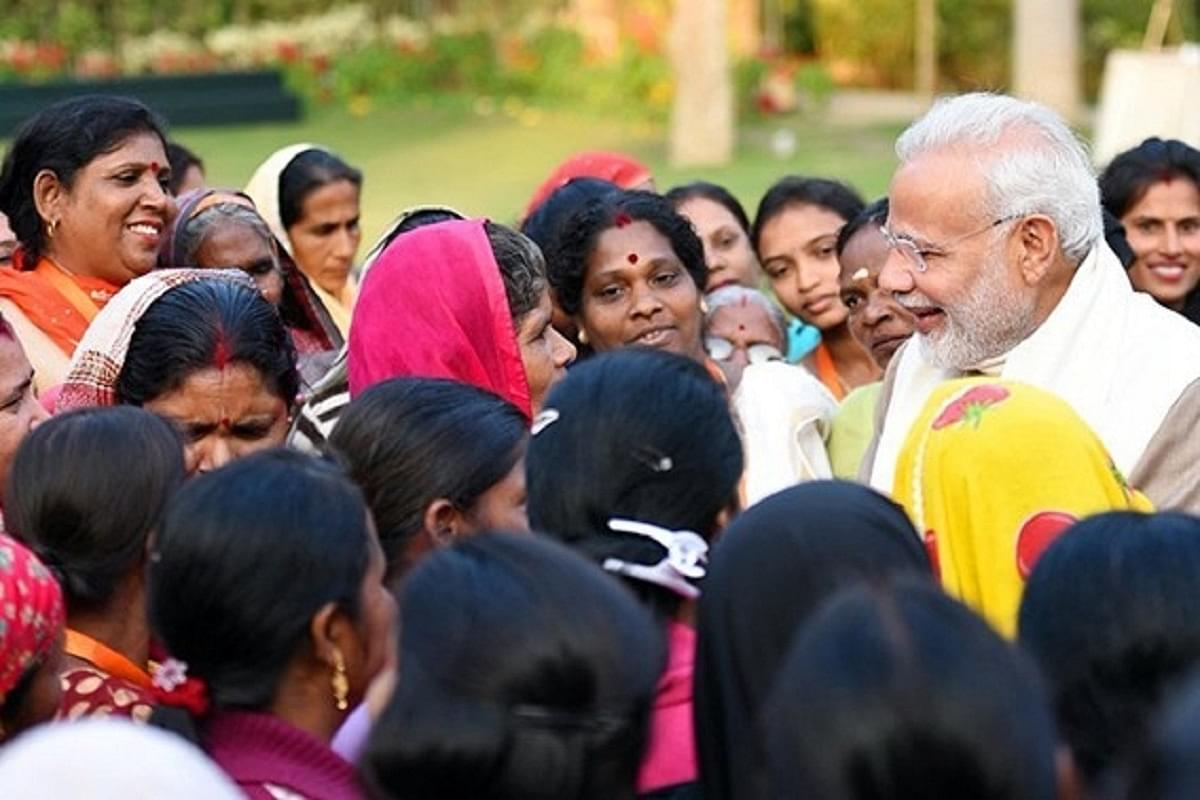 Prime Minister Modi is working with renewed vigour to empower the women of India. (pmujjwalayojana.com)

Women's welfare has been at the centre of several incredibly successful government schemes over the last eight years. These interventions have freed women from avoidable drudgery of daily lives and provided them with much-deserved ease-of-living after years of suffering.

Prime Minister Narendra Modi’s popularity among women voters is a reflection of his successful government policies. In addition, it underscores his ability to tailor successful policies which are based on his insights into social issues. His immense knowledge of problems faced by the general public come from the lived experiences gathered while working as a swayamsevak across the country over several decades.

As we celebrate International Women’s Day, it’s worth keeping in mind that when Narendra Modi announced that the government would build crores of toilets to end open defecation, protecting the dignity of women was at the heart of it.

As of today, over 11 crore household toilets have been constructed. Imagine the relief for the women who had to, for decades, subject themselves to bodily torture for a basic and routine function, keeping an eye on the clock until dusk to leave the house, risking embarrassment and physical harm.

In a similar vein, the impact of 9 crore cooking gas connections on the lives of women cannot be overstated. During the past six years, the Ujjwala Yojana has ensured that women living below the poverty line are no longer dependent on hazardous firewood for cooking. The smoke-free kitchens have afforded a cleaner and healthier life that has also led to savings on healthcare in the long run. Women are now also free from the tedium of having to collect firewood.

Policymakers have been aware of these problems for decades but it took Modi to finally deliver a solution to the people. These schemes have gone along way in redressing the injustice perpetrated against the poor, and women in particular, in the country.

Historically, the political class governing the country has been more than willing to rely on the excuse that India is too difficult and complex for policies to achieve stated outcomes. Prime Minister Modi’s invaluable contribution to the national agenda lies in his ability to instill a steely resolve and conviction into the same government machinery in order to achieve the goals of his policies and programmes.

The Jal Jeevan Mission is another example of the transformation brought about by Prime Minister Modi, who dealt with another basic issue, the lack of access to potable tap water connections. In about two and half years since the scheme was announced in 2019, the government has completed 5.8 crore connections covering 30 per cent of the households.

The scheme is a crucial piece in the puzzle to remove fetters from women’s lives especially in rural areas, where fetching water from long distances can be a dehumanising daily endeavour. There is no question that such schemes provide visible direct benefits, but the hidden benefits also include healthier women who are protected from waterborne diseases.

The lack of basic amenities that directly affected women had kept us underperforming perpetually on social and economic indicators. After correcting the anomaly, Prime Minister Narendra Modi was simultaneously devising and implementing the next stage of empowerment: ensuring financial agency to women.

Under the Jan Dhan Yojana, a vast unbanked population was first brought into the banking system by opening zero balance savings accounts. More than 55 per cent of the existing 44 crore plus accounts are currently held by women. Further, 68 per cent of the 2 crore plus pucca houses built under PM Awaas Yojna are jointly or solely in the name of women.

Holding the financial rein in their hands protects women from exploitation and abuse both on the domestic front and when they are dealing with the world at large. Another initiative to save women from wanton exploitation was the legislation to abolish triple talaq for the Muslim community.

The last eight years of Prime Minister Modi is ample proof that he views women empowerment as a fundamental component of country’s progress and not as an emotive matter to score political points.

The fact that the central government has honoured 185 women with Padma awards since 2015, including a record 34 this year alone, shows the fact that woman achievers are being held up as role models for society, so that little girls can dream big dreams.

Vasudha Madhogaria is an observer of politics and media.