Random Meditations Through Her 1000 Names - II 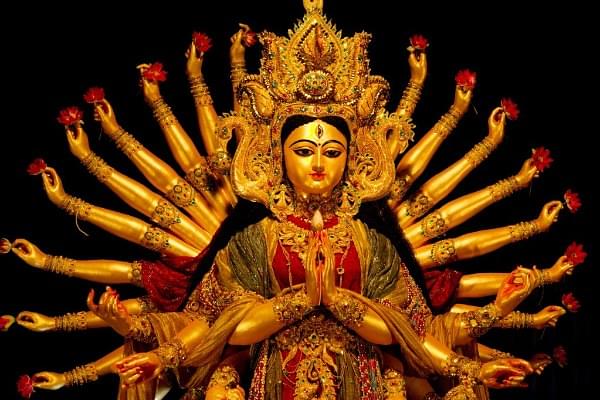 Read part one of the series here.

Her second name is Sri Maharajni. She is, after all, the wife of Shiva, the Mahadeva – the great deity of all deities. Hence, naturally, she is the great queen. That is plain enough. However, there is a subtle difference in being a queen because one’s husband is a king and being a queen because one’s innate nature is to rule and be a leader of people and nations. When translated, the second name, Sri Maharajni, simply means the auspicious great queen, the empress. But commentators say that when a queen is a queen because her husband is a king, she is Raji. Instead, Shiva’s wife is Rajni; she is a queen who governs independently.

She, being an independent, great, and auspicious ruler, may come from Vedic literature – the famous Vak Sukta (Rig Veda 10.125). Declaring herself the Rashtri, she says that she bends the bow of Rudra against the enemies of the welfare of people and she makes the people strive. In the Sukta, the emphasis is on the protective aspect of the goddess and she is depicted as the giver of prosperity to people.

This Vedic recognition of the Divine Feminine as the ruler had its effect in ancient India. Even the king’s coronation had, in its ritual, an important role for her. Dr Ambedkar points out that among the Ratnis who played a prominent part in the coronation of a king in ancient India, there was also the queen. The king-elect not only made her an offering but paid her a homage. He also made ritual worship to the queen and offered “salutation after the coronation ceremony to the, ladies of the chiefs of the Srenies (guilds)”. According to Ambedkar, this ritual demonstration “is a very high position for women in any part of the World” (Dr Babasaheb Ambedkar, Writings and Speeches, Volume 17, Issue 2).

In Indian history, among the more striking features is the vast number of queens who were not appendages of their husbands. These women took charge of their destiny. They ruled efficiently and fought their battles bravely.

Rani Shantala of the Hoysalas, who tradition says was a mathematician, dancer, and pacifist, took the effort to build the famous Belur Temple, in Karnataka.

Rani Durgavathi chose and married a tribal chieftain and led them in battle against an alien aggressor, and when defeat was imminent, she made the supreme sacrifice.

Rani Abbakka defied her husband when he asked her to bow down to the Portuguese. She led the army and fought against them.

Rani Mangamma is even today remembered by the people of south India for the chattrams she opened and the water bodies she created. Again, tradition has it that she did not hesitate to kill her son when she heard that she misbehaved with a woman.

In North India, similar is the memory of Rani Ahilyabai Holkar. The way she cared for her subjects, including the tribals, stands as a lesson even today for the rulers. When Bhils and Gonds were accused of harassing people, she understood the problem in its totality. She allowed the tribals to collect a tax for the goods that passed through their territory and also granted them the hill lands to them. One can compare this enlightened approach towards tribal conflicts to that of the British, who invented the concept of ‘criminal tribes’.

In Bengal, Rani Chandramani stood against the British to secure the rights of the fishermen to pursuing fishing in the Ganga.

Of course, the most well-known of queens is Rani Lakshmibai, the queen of Jhansi.

These are but a few names in the long list of ranis in India who ruled – they were able administrators, independent decision-makers, and not figurative heads. They came from varied backgrounds. They had the power to defy whatever patriarchal tendencies existed at that time in society. And their contributions spanned various fields – art, welfare, religion, and warfare. Most of them are characterised by a fiercely independent character.

Spiritually, the independent nature of the goddess is again emphasised in the 723rd name – ‘Swatantra’ – that she is independent, and fifty-fourth name that she is ‘Svadhinavallabha’ – she who has her husband subjected to her will (through love).