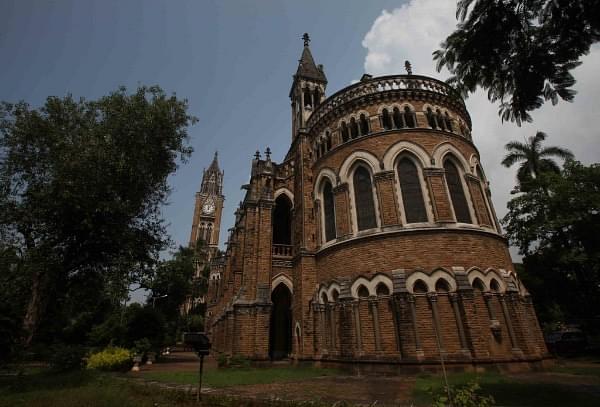 The Rajabai Tower allows Mumbai University campus to stand out in a cluster of buildings at Fort. (Anshuman Poyrekar/Hindustan Times via Getty Images)

The Bombay High Court’s judgment was in reference to a two-decades-old Maharashtra government resolution that had mandated that all colleges including minority ones reserve seats for the socially backward classes. In 2001, when Mumbai University directed colleges under it to implement the resolution, it was taken to court by St Xavier’s College. The High Court ordered a stay on the resolution in 2002 until it passed its judgment on the matter, which came in October 2017 – 15 years later, during which time minorities enjoyed complete admissions autonomy. The Maharashtra government woke last month out of its slumber and filed a special leave petition protesting the High Court order forcing admissions to come to a halt in India’s financial capital, affecting thousands of students.

The Supreme Court didn’t take much time in dismissing the state government’s petition, stating that the matter to keep minority institutions out of the ambit of caste reservations is already settled by Article 15 (5), which has been held Constitutional by the Supreme Court as well.

This is a blow to the ruling Bharatiya Janata Party (BJP) government as it has failed to secure more seats in some prestigious colleges of Mumbai for students from backward communities. This setback, however, should be seen as an opportunity to put a leash on the runaway minorityism in the education sector and make everyone play by the same rules.

The educational rights of Dalits and backward classes are curtailed. Some of the finest colleges, schools, and universities in India aren’t accessible to them. It’s time the BJP chose between championing their cause and keeping the pampered minorities above the rule of law.

There is one and only one definite way to do this – amend Article 30.

Sure, the Supreme Court dismissed the Maharashtra government’s petition citing Article 15 (5), but amending it would only result in limited success. Why? A short history is in order.

Three back-to-back Constitution benches in TMA Pai Foundation v State of Karnataka (11 Judges), Islamic Academy of Education, and P A Inamdar v State of Maharashtra had given two highly consequential orders stating: a) reservations can’t be forced on private unaided institutions, and b) unaided minority and non-minority institutions to be treated equally.

The Ninety-third Constitutional Amendment overturned the Supreme Court’s judgments on both counts by adding Clause 5 to Article 15 (5). Reservations were introduced in private educational institutions run by non-minorities (both aided and unaided) while minorities (including those funded by the state) were kept exempt.

Those who argue for keeping minorities exempt from this Amendment reason that it became necessary to do so because of the circumstances. Minority institutions are primarily for the benefit of minorities. That’s why they reserve seats for students from their own communities. Earlier, the maximum reservation limit was 50 per cent, which was waived in the TMA Pai foundation case. Given this, reserving 49.5 per cent seats for SC/ST/OBC wouldn’t have been possible for institutions that already have reservations at more than 50 per cent for minorities. So, it was only natural that the government exempted them. While this may not have been the thinking at the time, and the only reasons Arjun Singh, the then Human Resource Development minister, cited for exempting minorities was Article 30.

Be that as it may, the fact of the matter today is, minority institutions can’t be asked to reserve seats for Dalits and backward classes because it would take the total reservation above the threshold of 50 per cent prescribed by the Supreme Court in the Indira Sawhney case. We are in a tough spot. Thus, amending Article 15 (5) is necessary but not sufficient to end the minority raj in Indian education sector.

That can be done only by doing something about Article 30. If we go back to Constitutional debates, it’s clear that the Constitution makers didn’t wish to bestow on the minorities special rights and Article 30 was only an addition to Article 29, not a separate, new one.

Article 30 (1): All minorities, whether based on religion or language, shall have the right to establish and administer educational institutions of their choice.

Treating the two Articles as separate has resulted in grave injustice. Currently, the only differentiating factor between a minority institution and a non-minority one is the religion of the person running it. As writer and journalist Arun Shourie wrote in Falling Over Backwards:

If Ram Sharan sets up an engineering college, the State as well as the University concerned can prescribe all sorts of things it must do; if Mohammed Aslam sets up an exact clone of that engineering college across the road, teaching exactly the same subjects, using exactly the same textbooks, neither the State nor the University can regulate its functioning.

The judiciary’s interpretation has led to such a bizarre situation. It is Parliament that now needs to step up and correct these anomalies.

First, we must do away with the classification of minority and non-minority educational institutions that currently exists. Instead, the categorisation of institutions should be in “sectarian” and “secular” buckets. Those teaching subjects like science, mathematics, and social sciences should be classified as secular, and those which are set up to preserve culture and language, for instance, of a particular community can be termed sectarian.

Once this is done, all secular institutions, whether they are run by Ram Sharan or Mohammed Aslam, should be treated equally. The law of the land – whether pertaining to reservations or other assorted regulations – must be applied to both buckets indiscriminately. The sectarian institutions, whether of the Hindu, Muslim, Sikh, or Christian community, can have separate rules from the ones guiding secular ones, but within this bucket, everyone must be treated equally.

No reasonable person can oppose such an arrangement, which is in conformation with democratic and secularist principles, unless, of course, they have other interests in mind or wish to perpetuate the current, favourable regime of minority-first laws.

It’s not an easy task. But nation-building is never easy. The rules are currently stacked in favour of powerful lobbies and they wouldn’t gift the other side victory on a platter. The recent Supreme Court judgment has presented a golden opportunity. The BJP has nothing to lose but it’s hesitation. It has everything to gain by removing unjustified minoritarian privileges, unlocking more seats for the backward classes and thus scoring electoral victories.

It is rare that a politician is presented with an opportunity where he can do right by his people and the country and get votes for it in return. Letting this opportunity go because of ignorance or indifference would be a travesty.