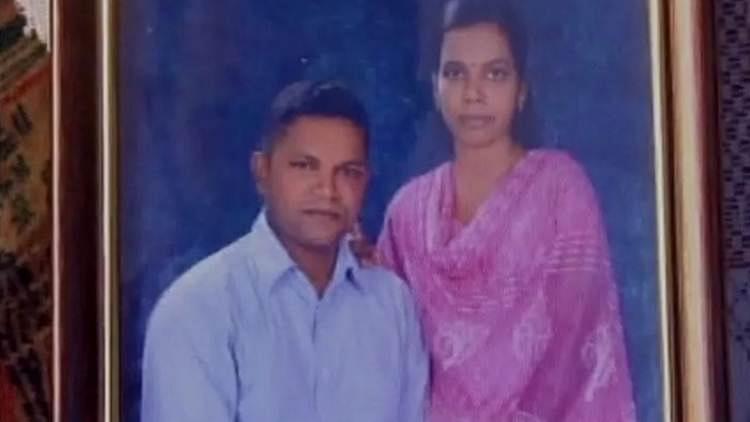 Soldier Roy Mathew with his wife in a photo at his house in Kollam, Kerala. (ANI photo)

The tragic death of jawan Roy Mathew, who may have committed “suicide” after a website aired a sting operation in which he allegedly criticised the sahayak system in the army, raises ethical and moral issues on the legitimacy of such methods to collect “news”.

While the jawan, who was unaware he was being filmed while talking to a journalist about what sahayaks are made to do – apparently they do basic domestic chores like walking the dog and taking children to school – was found hanging in his room in Deolali Cantonment in Maharashtra a few days after the sting was aired.

While it is possible that Mathew hanged himself due to guilt over the way he compromised his officer who held a rank equivalent to colonel, one cannot rule out official pressure from his superiors or even foul play. And, it goes without saying that using sahayaks, or buddies, to do domestic work is not right for a fighting jawan. These jobs can easily to be given to domestic help who don’t wear the uniform.

But the larger issue is the validity of stings. In the past, many stings have indeed worked to ferret out wrongdoings, as in the case of the Jessica Lall murder case, and the roles played by some rioters in 2002. Global newspapers like The Sun have used stings to expose call centre scams in India, and some stings by Cobrapost have been used to expose money laundering in many banks.

So, there is no doubt that stings can be a force for good, and valuable tools for bringing lawbreakers to justice. At the very least, exposure imposes a public relations cost on the political party, company or individual who is outed.

But, in recent years, the availability of cheap spy cameras has made it the easiest way to investigate anything without doing any real journalism. Stings are essentially about getting a garrulous person to chat or boast about his or her illegal exploits, entrapping unwary subjects into saying or doing things under false pretences, and offering bribes on camera to show someone is corrupt. Delhi Chief Minister Arvind Kejriwal famously asked ordinary citizens to buy spycams and give him evidence about corrupt babus. He was essentially asking ordinary citizens to do his job, and leaving the risk element of the sting being discovered with the citizen.

There are several ethical reasons to delegitimise stings except when they are truly above board and sanctioned after a transparent process.

First, the line separating genuine illegal activity from a make-believe, artificially-created illegality is a thin one. If I offer someone a bribe for a fictitious defence contract, and the person is shown to accept the money on camera, the only thing real is what is seen on camera. It does not mean the person will try to influence a contract in case he happens to be in a position to do so. Poor Bangaru Laxman, the late BJP president, was entrapped this way by a Tehelka sting. While we need not defend Laxman’s willingness to accept the money, how can one convict a person for something that did not actually happen? By this token, all the journalists who were caught making compromising statements in the Niira Radia tapes should be equally guilty of practising shady journalism and dishonouring their profession.

Second, the societal damage done by indiscriminate stings will be huge. India is already a low-trust society, but consider how suspicious we will become of our fellow-citizens or even friends if sting-related betrayals become the norm and everyone becomes guarded in what they say. Spycams in hotel bedrooms or changing rooms in malls are already used to blackmail women; soon scores will be settled with enemies this way. You cannot build a robust and higher trust society by making everyone look over his shoulder every day.

Third, a sting is lazy journalism – a short-cut to fame using dubious, underhand means. Journalists are substituting the need for hard work and investigations and painful gathering of evidence with tell-all, grainy videos. This can hardly do the profession’s reputation any good.

Fourth, there is the prospect of journalists going to jail. In 2012, two editors of Zee News were arrested when industrialist Naveen Jindal produced video footage to claim they were trying to extort money from him. That the case is going nowhere is another matter, but consider the possibility that where we have an honest man who not only refuses a journalist’s bribe, but reports him to the police saying he was trying to bribe him. This has not happened only because honest people don’t go around trying to entrap journalists, and, in any case, their offices may not have video surveillance. But soon this will become the norm.

If stings are kosher, reverse stings too will become the norm, where powerful people will entrap journalists to gain leverage over them. We don’t know the culpability of the Zee journos in the Jindal case, but this would be a very easy way to fix journalists by powerful vested interests who can call them for a conversation and film them secretly and get them to say things they would not say normally.

This is not to say that stings should never be used. They can. Just that it cannot be a free-for-all, where any two-bit journalist can wantonly make a sucker of an unsuspecting victim.

If newspapers, TV channels and websites want to conduct a sting, there should be an audit trail of the proposal for the sting, how it was discussed in editorial meetings, the public purpose the sting is supposed to achieve, the means sanctioned for the sting (can she offer bribes, can he lie through his teeth to gain the target’s confidence), and the evidence will be used. Most important, there should be additional corroborative data to validate the spycam’s evidence before airing the sting.

To gain true validity, it is the committee sanctioning the sting that should take legal responsibility for it, and not just the journalist seeking glory from it. There should also be one ombudsman who does not belong to the publication house whose consent could be sought. This will not only give the publication an external sounding board, but will also protect the journalist if things go wrong during the sting. For example, what if the sting is discovered, and the thug targeted decides to bump off the journalist? Who will take responsibility for this?

Stings ought to be the exception to journalism and not the norm. They cannot really substitute for hard work and investigations. If they are merely about holding a mirror to society they are fine. But they cannot be given the legitimacy that TV channels currently give them.