The Truth About Fadnavis Government Allowing Sale Of Temple Land 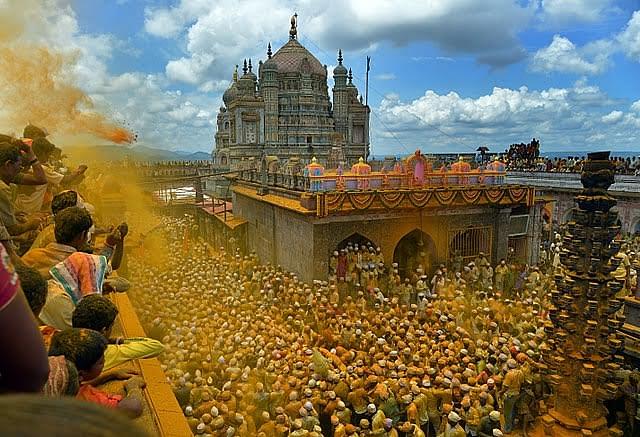 The Bharatiya Janata Party (BJP) government of Chief Minister Devendra Fadnavis in Maharashtra seems to have rubbed the hardcore base of the party the wrong way, again. Though, Fadnavis is undoubtedly one of the finest administrators to serve Maharashtra in decades, on cultural issues, his actions end up slotting him on the wrong side of fervent BJP supporters for whom temples and schools matter more than dams and expressways.

While earlier, the Maharashtra government came under intense criticism for cracking down on Hindu-run schools for not strictly conforming to an inherently sectarian law like the Right to Education (RTE) act, this time it’s the temple issue that has riled up the supporters.

On 10 January, The Hindu reported that "the State government has decided to open up massive tracts held by temple trusts’ and towards that goal, intends to amend existing laws, allowing transfer of Devasthan Inams land held by individuals and 4,000 temple trusts, including the ones at Shirdi, Siddhivinayak, Pandharpur and Mahalaxmi in Kolhapur.”

The law in question here is Hyderabad Atiyat Inquiries Act of 1952. The state cabinet gave its approval to amend section 6 of the the said act which says:

Atiyat grants shall not be liable to be transferred or encumbered in any manner or to any extent whatsoever and it shall not be lawful for any Court to attach or sell any Atiyat grant or any portion or share thereof: Provided that, half the income of the Atiyat grant shall be attachable in execution of a decree through the Revenue Department.

We do not yet know how section 6 will actually read after the amendment. It should become clear soon. What we do have at present is a press release from the state government.

It refers to changes in use of Khidmatmash Inam lands in current times. Khidmatmash Inam land are public wakf under Muslim law. Basically, under Islamic rule, temple lands in Hyderabad region of Maharashtra were described as public wakf and given to temples and other inamdars as inams. They had the same stature as that of wakf properties. We need to understand their nature: they are lands donated to Allah and can never ever be gifted, inherited, or sold. That’s why section 6 clearly gave the same status to temple lands. These could not be transferred or encumbered in any manner or to any extent whatsoever.

The press release states that the amendment approved by the state cabinet will make it possible to develop Khidmatmash Inam lands and use them for sarvajanik (public) purposes: they can be developed for public works, education, health, etc after getting approval from the government. The government reasons that earlier these lands could only be used for agricultural purposes proceeds from which were employed in the upkeep of temples. However, with increasing urbanisation, this had become difficult as these lands now fall within city limits.

Some supporters defended the government’s move saying that now temples would be able to raise more revenue from these lands as they are now open for activities other than agriculture. But if the government’s intention was to do only that, no one would’ve any complaints but the press release clearly states that the Kidmatmash lands reserved for public purposes under preliminary development plan or final development plan can be transferred if town development authority needs them, of course, after approval from the government.

Some other defenders of this move have said that the government will need approval of temple management, however, there is no indication given of such arrangement. Even if it is so, the committee that manages these temples is Pashchim Maharashtra Devasthan Vyavasthapan Samiti (PMDVS), and all of its seven members are government appointees who get this sinecure for their loyalty rather than their lifetime contribution towards dharma. Remember, these specific lands fall within city limits and it is not out of realm of possibility to think the government might be eyeing vast tracts of easy land for itself.

But the state government may not limit itself to temple lands falling under PMDVS or under jurisdiction of Hyderabad Atiyat Inquiries Act, 1952. On the proposed amendment, Asian Age quoted a revenue department official saying, “This will allow the transfer of Devasthan Inam lands held by individuals and as many as 4,000 temple trusts to be used for public education and health purposes in the Marathwada region alone. However, the government will bring out a similar policy that would be implemented in the entire state. This will free more land across the state that can be utilised for public purposes.”

“Public purposes” is a slippery slope. If the governments start cornering land parcels belonging to temples, their economic heft will be dealt a serious blow. As will the fortunes of Hindus in Maharashtra.

This is not to say that the situation is ideal at present. In fact, the amendment approved by Maharashtra cabinet is one of many steps suggested to it by a seven-member committee that was set up by chief minister Devendra Fadnavis after Hindu groups alleged corruption and scam at some of the biggest and most important state-managed temples in the state, especially those under PMDVS.

Three years ago, on 12 January, members of Hindu Vidhidnya Parishad (HVP) organised a joint press conference in Kolhapur with their compatriots from Hindu Janjagruti Samiti (HJS). HVP fashions itself as a forum of activist advocates championing the cause of dharma, working towards formation of a Hindu rashtra. HJS activities include imparting education on dharma, working towards its awakening and protection. Both groups work in tandem.

The 12 January conference, led by HVP’s chairman Virendra Ichalkaranjikar and HJS’ Sunil Ghanvat, was called to expose brazen corruption that HVP activists claimed they had unearthed in the way thousands of Hindu temples by PMDVS were being run. This committee is entrusted with the management of 3,067 temples in the western districts of the state including notable ones such as Shri Siddhivinayak and Mahalakshmi temples among others.

According to an RTI filed by HVP activists, temples falling under PMDVS have around 25,000 acres of land. And through the samiti, Congress politicians have been managing these for much of the last 49 years, i.e. since 1969 when PMDVS was formed and 3,067 temples in western Maharashtra came under it. Politicians from Nationalist Congress Party (NCP) also shared power in the samiti in equal measure until 2014.

The management of these temples has been so pathetic that there are no proper records of all the lands in the possession of temples. But it is unlikely that this is not deliberate. As there is no record, lands can be sold, transferred or even conveniently encroached by others. These lands could’ve earned temples hundreds of crores by properly leasing or renting them at market prices but due to blatant mismanagement, all that wealth has been squandered or worse diverted for their activities and benefit.

The other RTIs filed by HVP activists revealed more muck. Imagine the gold and jewellery, not to speak of the cash, donated to these temples in the last 40 years but the audit for the years 1969-2007 point towards embezzlement of mammoth proportions. Temple records of donations and receipts given to devotees do not match. Saris donated were sold to traders without fair tender system in place. In the absence of any proper records, all this misappropriation becomes that much difficult to quantify. Various events (which benefit no one) costing hundreds of thousands of rupees is conducted every now and then and these temples have to pay for them.

Same story repeats even in temples that are not under PMDVS. Take Pandharpur’s Shri Vitthal temple, for instance. It was taken over by the government in 1985. HVP has shown through audit reports, RTI information how badly mismanaged this temple is. Misappropriation, corruption, no proper record of donations - the same tale of mismanagement and corruption.

HVP didn’t limit itself to raising its voice about such corruption in media via press conferences. It held protests and ran a campaign to make more Hindus aware of the alarming situation. Thousands gathered and raised their voices. HVP also petitioned the BJP government in the state and demanded high level investigation into the large scale corruption. Kolhapur MLA Rajesh Kshirsagar of Shiv Sena raised the matter in the state assembly in April 2015 to which CM appoint a Special Investigation Team (SIT) of the Criminal Investigation Division (CID) to probe the scam thoroughly. In August that year, Fadnavis delivered on his promise.

In addition to SIT probe, he also set up a seven-member committee which was tasked to a) study and prepare a status report of all the land parcels under possession of state-run temples across Maharashtra and suggest a comprehensive plan to tackle the issue of encroachment and illegal transfer of the land; and b) prepare a status report of the land parcels of the temples in urban areas and suggest ways for proper usage and management of these properties, as reported by DNA.

Amendment to section 6 of Hyderabad Atiyat Inquiries Act, 1952 is said to be one of many suggestions given by the committee.