Ujjain Man Who Has Cremated Over 24,000 Unclaimed Dead Bodies In Over Two Decades 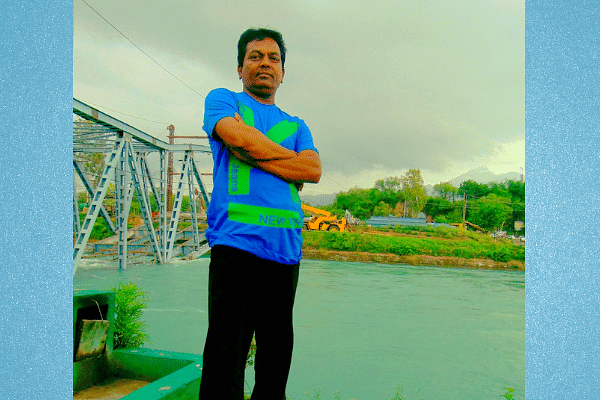 While visiting Ujjain, the city of Mahakal, recently, a very unusual wall writing drew my attention. The writing was: “Lawaris Lash ke Bare Mein Soochit Karen (Inform about [any] unclaimed dead body)”. At first glance, I was confused as to what this meant. I asked the driver, a resident of Ujjain, about this person. He told me this person cremates unclaimed dead bodies in the city, free of cost. I immediately dialled his number to ask if he was at home. He told me he was ready to move to attend a call regarding a dead body.

On my request, he agreed to wait for me at his home. I postponed all my plans and reached Anil Dagar’s home at Bilotipura. I met a very simple but strong-willed man. His office was full of files in which he maintains the record of every dead body that he has cremated or buried. All the walls of the office had photographs showing his felicitation by bigwigs of the city, including some renowned holy persons like Swami Satyamitranand Giri and the current Lok Sabha Speaker Sumitra Mahajan, who is MP (Member of Parliament) from Indore, an emerging metro city about 59 km from Ujjain.

My first question was. “For how long have you been doing it?” He said: “I have been cremating dead bodies at Chakrateertha Crematorium since the age of 15. For some time, I worked as an assistant, but soon after, I started doing it full-fledged. I have noticed that most people cannot arrange sufficient quantity of wood for cremation of the body. They try to cremate a body with just 1.5 quintals of wood. Such bodies remain incompletely burnt as the central part of the body requires more time to burn. If the wood is insufficient, the torso remains half-burnt. For many years, my duty was to notice such bodies and burn them.”

How It All Began

“Once during winter, a dead body from a Joshi family was brought. As it was raining heavily, relatives performed the last rites hurriedly and left. I requested them to stay for some more time, but they ignored my advice. It was raining heavily, so river Shipra inundated the crematorium, and that half-burnt body was washed away. It got stuck in the riverbed and on reaching the crematorium two days later, I found a sadhu sitting with a burning corpse.

“Since it was winter, I arranged tea for him. Pointing to a half-burnt body in the river bed, he said it is the same body that you mentioned that day. It is a religious city, where thousands of people come every day from all over the country; it looks bad if dead bodies remain in such a condition. I asked him how I could fetch that body as it was a quagmire and the water flow of the river was strong. He stood up and asked me to follow him to the riverbed. We pulled the body out. Already two bodies were burning in the crematorium. He told me to put that, too, in any of them. The saint advised me to ensure the cremation of all unclaimed dead bodies in the city in 1994. I have been doing this since then.”

Tarpan In Sindhu And Ganga

The practice continues since 1994. This year, till June 2018, he has cremated or buried 265 bodies. “When this number crosses 400, I go to the Sindhu River in Leh along with my wife and perform tarpan of all the bodies. I have been doing it for the last 24 years. I store the ashes of all the bodies and immerse them in the holy river once a year,” he revealed.

On asked how he attends to a call, he says: “As I receive the call, the first task is to fill up a form collecting all vital information about the body. Most calls come through police or the local administration. But when such calls come through general public, I inform police and attend the case only after the police formalities.”

He says he has disposed of about 24,000 unclaimed bodies during the last 24 years.

The bodies come from nearby areas like Nagada, Makshi, Raghvi, and Makdom. “I cremate or bury each body with full respect. I maintain a complete record of these and submit to the SP office regularly,” said Dagar, who works at the Ujjain Municipal Corporation. He cremates or buries bodies as per their way of worship as ascertained by the police. About 2,500 Muslim bodies have been buried in 20 years.

This piece was first published on Organiser and has been republished here with permission.