Why Hadiya Is No Hero 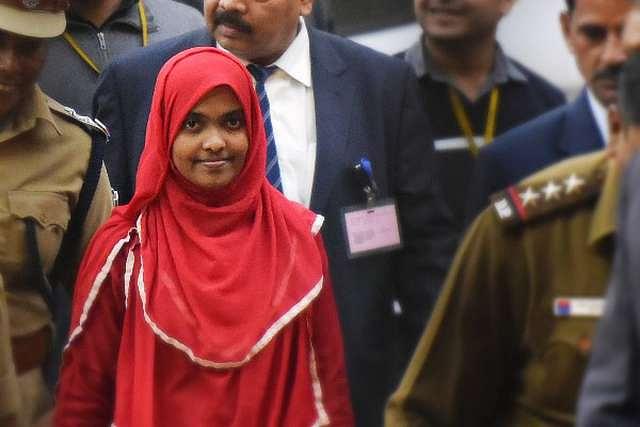 Hadiya at the Supreme Court after hearing on 27 November in New Delhi. (Vipin Kumar/Hindustan Times via GettyImages)

The innocent face covered in a veil does not reveal her age. Hadiya alias Akhila Ashokan, who has been in the news for her conversion to Islam and her marriage to a man called Shafin Jahan (which was later annulled by the High Court of Kerala) has since been hailed as a hero by many liberal women. The same liberals who find “ghonngat” offensive and “Karva Chauth” regressive, saw in the veil, a new dawn of courage and hope. Somehow, the veil is not so offensive because the change in the name and religion preceded the marriage.

The story of Hadiya is, by now, well documented. After passing her Class XII exam in her second attempt, she went on to pursue a course in homoeopathic medicine and got attracted to the tenets of Islam. She eventually converted to Islam without her parents’ knowledge. Subsequently, while her case was being heard in court, she married without informing the court which resulted in the annulment of her marriage.

Two very important arguments are forwarded by the liberal brigade – one, she is a hero because she has stood the tyranny of many organised and institutional efforts to challenge her decision and second, her father has no locus standi in her choice of religion or life partner or any major decision she takes in her life because she is 24 years of age.

Does someone become a hero because of personal choices? I am afraid not. A R Rahman converted to Islam, but it is his achievement in the field of music that we admire. We all make choices every day and stand up for the choices that we make. Any choice, however unconventional, is not a sufficient condition for anyone to be hailed as a hero. It is what we make with our lives and how it meaningfully impacts people around us that would be the true yardstick of heroism.

Hadiya has repeated and reaffirmed her faith in Islam and stood her ground through several interrogations. She has also stated that she has embraced Islam out of her free will. Certainly, this means that she must be consistent in her claim and that is what she has been. While some may say that she has been brainwashed, there is still no evidence of that. Be that as it may, what is heroic about a woman asserting that she converted out of her free will? She is not the first to cross over and certainly will not be the last. But coming from Shobha De, the title of hero may never be about merit. Remember how she went weak kneed over Raghuram Rajan’s sexiness quotient when the rest of us were discussing his monetary policies and his will to discipline the banking system?

Anointing false heroes that suit certain narratives has been extremely problematic. It creates a bunch of people who get attention for the wrong reasons and fade away from public memory, but the search for heroes continues to move farther away from merit. Kanhaiya Kumar, for instance, who is doing his PhD on tax payer’s money since 2011, is not being discussed for his exemplary work in African Studies. For the uninitiated, he is pursuing PhD in African studies. This may be a useful reminder for Kumar himself, for it is entirely possible that he may have forgotten! Nor is Hardik Patel being discussed for anything other than his surname. The society may forget these people and move on, but the damage has already been done. Indian society already boasts of many such people who have received limelight owing to dangerous narratives. Hadiya merely joins the list of such heroes who will eventually be forgotten.

The next problematic argument is the involvement of the father in his daughter’s life:

Indian society values family relationships and children do not walk out of their homes when they turn 18. Parents sponsor higher education of children, marriage and sometimes even grandchildren’s birthday celebrations. Indian parents are emotionally invested into their children’s lives. Without going into the merits or demerits, let us understand that Indian society considers family ties as essential and inevitable. Mothers in law pack lunches for their working daughters in law and son drops the father in his scooter on his way to work. Grandparents make themselves available for child care of their working children’s children and daughters take leave from office to take their parents for a health checkup. In extreme cases, there are girls who have been victims of unsavoury marriages and the girls’ parents shoulder the responsibility of the girl and in case she has children, then the children too.

In theory, there are rights that accrue when a person turns 18 – right to vote, right to marry and right to earn a living. In the Utopian world of the liberals, freedom, independence, choice and rights are absolute and non-negotiable. In the world that the rest of us inhabit, they co-exist with roles, responsibilities, relationships, obligations and social values. In this world, Hadiya’s parents will continue to be important stakeholders throughout her life and in all the events that will unfold in her life. They will stand by her through thick and thin. The Shobha Des of the world, in the meantime, will busy themselves shopping for their next hero.

Ranjani is the author of Kuruvamma’s Saree, a fictional tale about microfinance in India.