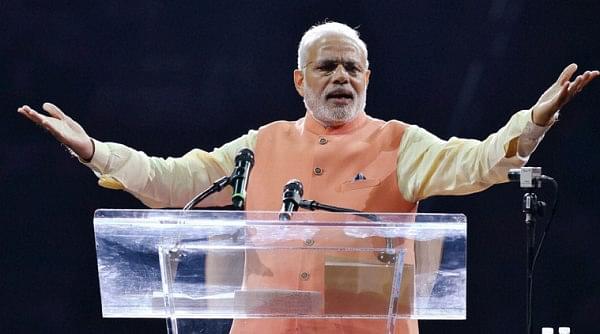 “Black Money makes for bad policy” screamed the New York Times recently. It was of course not talking about money laundering in the United States but rather about the demonetisation drive in Modi’s India. The headlines from other international media outlets were not very different. “It is not going well” opined Vox, a left leaning digital views portal in the United States.

The Financial Times out of UK called it “Modi’s bonfire of the rupees” while The Economist also from the UK called it “botched execution”. While the South China Morning Post saw shades of “North Korea” in the move, the Forbes Magazine concluded a “lack of homework”. The rash of negative commentary in the International Media is not limited to demonetisation alone.

In fact in the New York Times alone, it is stunning the amount of anti-India commentary that gets published routinely. A case in point is the manner in which negative stereotypes associated with Prime Minister Narendra Modi have been invoked in columns commenting on the election of Donald Trump as the next President of the United States. Writing in the New York Times on the Trump election, one columnist claimed the precedent for Trump in USA in 2016 was set way back in India in 2014 when “Modi rose to power demonising minorities, immigrants and media”.

Another columnist also writing in the New York Times on the Trump victory saw parallels with he called “Modi’s propagation of Hindutva”. From an alarmist editorial on “the Human Toll of India’s Railway” to a preachy one on “India’s Air Conditioning” and the climate deal, the New York Times has maintained a steady flow of anti-India commentary.

The track record of global news agencies like Reuters has not been very different either with the added dimension of distributing editorial views as news. The below graphic collage of Reuters headlines during much of 2015 captures this phenomenon quite well.

Through much of 2015, the anti-India narrative in global media manifested itself in a slew of issues from Beef politics to Award-wapsi as is reflected in the below graphics.

With the net effect of perpetuating negative stereotypes of India while distorting news reportage on events in India graphics.

To best appreciate the damage done by such negative stereotyping and distorted reporting one needs to rewind back to June of 2015 when a stray phrase in a speech in Dhaka by Prime Minister Modi that went “despite being a woman” made its way across the globe to an op-ed column in Scotland on an unrelated local controversy on “women in labs”.

It was perhaps this sustained negativity against India in the global media that was at the back of his mind when the Prime Minister at a recent speech on the occasion of media awards in honour of Ramnath Goenka had spoken on the need for a strong global media voice from India to present India’s viewpoint to the world.

“Even today, people refer to BBC. Now, Al Jazeera has also become a big player. So, CNN, BBC and Al Jazeera. People in this field (journalism) should look at it as a challenge. We should have an Indian (media institution) of world-class quality. Because if we are a major player in the world, our every concern should get reflected effectively in the world. This should be our dream. I certainly feel that we must have influence in the world,”

Interestingly though the Prime Minister in the same speech went on to add that he did not see “government media” being able to effectively play that role. The global experience on this count though is mixed. Two of the examples cited by the Prime Minister are indeed “sarkari” with BBC funded by the tax payers in Britain and Al Jazeera by the royal family of Qatar.

Russia Today which is the global voice of the Russian government not only has one of the largest footprints digitally with YouTube but also was viewed as influencing the narrative during the recent Presidential elections. China’s CCTV has long ensured its reach into American households by subsidizing its way into most cable and satellite basic subscription packages.

It is a sign of how influential public broadcasters have been that the BBC’s global website is the top news site outranking all other digital news platforms across the globe by a wide margin on key metrics like reach, visits and views on a monthly basis. On the other hand, Al Jazeera’s forays across the globe had a mixed record with its American operation costing a fortune and ultimately getting shut down.

Modi’s India with its billion voices, aspirations has a rich perspective to offer to the world making a strong global media presence from India an urgent imperative. There is a strong case to tell the India story to global audiences while reporting on International News with an India perspective.

There is also a strong need to present India’s ‘Point of View’ and ‘Perspective’ on global events as they unfold while challenging the anti-India narrative in Foreign Media through a diversity of views and opinions without necessarily doing so from a partisan political vantage point.

Such a global media presence would also create a mindshare for India’s strategic interventions from a geopolitics and global economy standpoint as we look ahead to new emerging world order where the continued relevance of post-world-war, post-cold-war global institutions and geopolitical alliances is being called to question.

The time is ripe for a global voice to Modi’s India of a billion irrespective whether it is the product of private capital or public funding.