Why Socialism Is Still Popular: Humans May Be Wired To Seek It 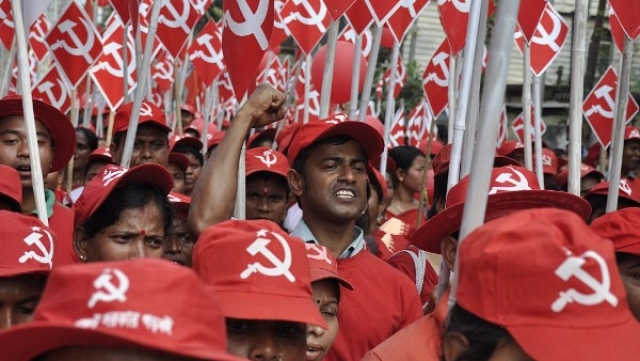 Supporters of The Communist Party of India-Marxist (CPI-M) shout slogans during a rally. (ARINDAM DEY/AFP/Getty Images)

Why is socialism still so popular? A superb conference at Cato recently addressed the issue with new insights and reasoning. Socialism should be discredited in this age of incredible abundance and progress: hunger has declined from 30 percent of the world’s population to some 10 percent, yet with billions more mouths to feed. Socialism’s continuing appeal is so irrational that there must be some innate support for it in the needs of the human psyche. The subject was explored by several evolutionary psychologists at Cato’s event, which was moderated by Marian L Tupy, editor of HumanProgress.org and a senior policy analyst at Cato’s Center for Global Liberty and Prosperity.

I always used to think that socialism’s appeal mainly came from envy, which was innate to human character. There’s a classic book titled Envy, by Helmut Schoeck, that explains the extraordinary progress of Western civilisation as coming from our religions, Christianity and Judaism before it. It notes that two of the Ten Commandments strongly condemned envy – that subordinating it was vital for a society to progress. But envy is still innate. Remember the old story of a poor Russian peasant, whose neighbour finally owns a cow. The peasant becomes consumed with envy and cries out to God for relief. When God answers him to make a wish come true, he prays, “God, make my neighbour’s cow sicken and die.”

New knowledge of human nature delves much deeper, however. For 2,00,000 years, humans lived in tribes as hunters and gatherers. Agriculture has only existed for some 10,000 years, and the human mind has not changed appreciably during the last 50,000 years. Evolutionary psychology (EP) helps us understand “why relatively free and fabulously wealthy societies like ours are so rare and, possible, so fragile.” (The quote and the numbers above come from a Cato paper distributed at the conference, “Capitalism and Human Nature” by Will Wilkinson.)

Professor Jonathan Haidt spoke of his article “The Moral Foundations of Occupy Wall Street” for the libertarian magazine Reason. He showed photographs of the leftist demonstrations, explaining that while participants promoted a contrary frame of mind, they still understood the tradeoffs between communal values and economic growth. They had slogans like “equality now, liberty later.” Their objective – having the 99 percent throw off the yoke of the 1 percent – fit with EP theories. (Haidt’s analysis and interesting visuals are in the Cato video of his speech linked above.)

Another speaker, Prof. Leda Cosmides, explained how primitive hunting was intrinsically difficult and dangerous. Hunters caught prey less than 40 percent of the time. This led to an ideal “communist” society of “from each according to his ability, to each according to his need.” Luck was often the reason one party returned with food and not the other. Any tribesman who was injured or became ill could only survive, along with his family, if the rest of the tribe shared the food they caught. Sharing was everything and property rights scarcely existed.

John Tooby, an early pioneer in EP, explained why socialism and even Marxism are still so popular in the academic world and among many young people. He said nobody rational could defend the economic performance of resource-rich but socialist Cuba and Venezuela compared to Hong Kong – where, without natural resources, gross domestic product per capita increased by 89 times from 1961 to 1997. He explained that the spontaneous order of capitalism did not reward superior professors and bureaucrats with the income and recognition that they thought they were worth, that markets make intellectuals irrelevant. He explained how the loneliness of modern societies also made socialism appealing in terms of old tribal memories of a “good world,” where one was surrounded by relatives and people who “cared.” Many young people reach for a more sharing society, which they imagine in socialism.

As Leda Cosmides and John Tooby put it:

More about the human mind is well explained in the Cato paper linked to above by Wilkinson. It explains in detail the concepts of Cosmides and Tooby. Studying EP does not tell us what kind of society works best, but it does tell us what kind of society does not work well – think socialism and communism. EP helps us to work with human nature. It helps us “to understand that successful market liberal societies require the cultivation of certain psychological tendencies that are weak in Stone Age minds. Free capitalist societies work with human nature. But that human nature is not easy material to work with.”

Human minds are quick to define who is inside or outside their own group – think of our tribal ancestry. The disposition to think in terms of “us” versus “them” is instinctual, the reason populist and racist rhetoric always finds a ready acceptance, especially when growth slows or there are economic crises. Wilkinson explains in“Capitalism and Human Nature,” in terms of EP, some of the animosity against free trade. He writes, “Positively, free trade is laudable for the way it encourages us to see members of unfamiliar groups as partners, not enemies.”

Humans form hierarchies of dominance. “Life at the bottom of the dominance heap is a raw deal … lower status males naturally form coalitions to check the power of more dominant males … to [try to] achieve relatively egalitarian distribution of resources” – think Occupy Wall Street. The human capacity for “envy is related to our difficulty in understanding the idea of gains from trade and increases in productivity unequal sharing in order to accumulate investment capital.” Socialism is about dividing existing wealth, not creating new wealth.

Equally, the zero-sum world of primitive societies (embedded in human minds) makes it very hard to focus on the “increases in total wealth through invention, investments and extended economic exchange.” Wealth through most of human history was acquired by cheating, stealing, invading one’s neighbours, or just sheer luck. This explains much of human history and the recent history of the Third World in particular. Industrialisation came from Northern Europe and is even reflected in the languages. The word for getting money in English is “earn,” in German it is verdienen. Both imply work. But in the Romance languages, it is ganar in Spanish, gagne in French, and similar to Spanish in Italian. The word is the same as “to win.” That implies that work and luck are equal, or even that hard work won’t help without good luck. Historically, in most of the world, capitalism meant trading, not the creation of new wealth.

When I first went to work in South America in the 1960s, I observed how people thought that wealth came from owning land, from owning minerals under the land, and from foreign (American) corporations. There was little credibility for the concept that wealth could be created by their own people. The success of Hong Kong, and the ideas of Ronald Reagan, Hernando de Soto and Jude Wanniski, were principal promoters of a change in the psyche, and today many Latin nations foster economic growth with lower taxes, the rule of law, property rights and free trade – e.g. supply side economics.

The Cato paper linked above explains much more in detail and is well worth reading. There are also, of course, other reasons many nations don’t prosper. Faulty electoral systems, for example, which I have written about, or foreign invasions.