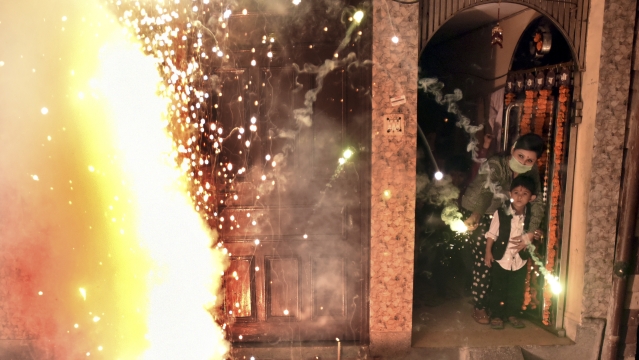 India’s capital is in the news again for the same reason it does around this time of the year, every year.

The winter has set in, air pollution levels are rising, and the city is enshrouded in a thick layer of smog. With such high levels of pollution, the powers-that-be are busy playing with the idea of bans to reduce the suspended particulate matter in the air. While the Government of the National Capital Territory of Delhi (GNCTD) toyed with the idea of banning cars in the ill-planned and ill-fated odd-even scheme two years ago, the Supreme Court has been banning the sale of fireworks for two years now.

But will these measures work? Probably not. Why? Perhaps because all of these stop-gap measures address only a small fragment of the causes of air pollution, while the larger sources continue to be ignored.

While the blame for the pollution usually lands on the use of fireworks during Deepavali, is it really the only or even a mighty cause?

A 2016 study by the Indian Institute of Technology, Kanpur, (IITK) looked at the pollution levels in November 2013 during Deepavali celebrations (known as Diwali in the north).

One thing became certain – Deepavali wasn’t the real cause of pollution in the capital, and so, banning fireworks cannot solve the smothering pollution problem.

So, what can be done to reduce pollution in Delhi, and along with it, the whole of north India?

One, eradicate the practice of burning paddy stubble after harvest.

It was reported in September 2017 that farmers burning paddy crop stubble across the National Capital Region (NCR) was contributing to the rising smog levels in the region. As winter sets in, it naturally gets worse.

Last year, Delhi High Court had directed the states of Uttar Pradesh, Haryana, Punjab and Rajasthan to strictly enforce a ban on the burning of paddy stubble, holding the chief secretaries of the states responsible. The government must encourage farmers to take up conservation agriculture on a large scale. Paddy stubble is burnt to clear the fields to sow wheat. Burning them is less time-consuming than transporting them to a government power plant, which is also economically impractical for many.

The Borlaug Institute for South Asia (BISA), along with Punjab Agricultural University, has advocated several practices to prevent the burning. (More about conservation agriculture here) A decade ago, farmers from East Washington in the United States had advocated several measures of crop rotation to prevent burning of crop stubble.

This year, it has been reported that Delhi’s air pollution levels have fallen by 40 per cent because the burning of crop stubble has been reduced.

Two, implement dust control mechanisms for construction sites. While one cannot ban construction altogether, Delhi is a city of perpetual construction. With two major metro lines – involving significant tunnelling – and many more road projects along with various housing projects going on, some amount of dust control measures such as water application or polymers need to be implemented.

Three, start segregation of waste. Landfill fires are common. For instance, when the Bhalswa landfill caught fire in April 2016, it lasted for three weeks. The Delhi Pollution Control Board sent a notice to the municipal corporations, saying it had received complaints from residents and the GNCTD that garbage was being burned at these sites.

The garbage dump should have been shut down in 2006 after it crossed all permissible limits of accumulation, but a decade on, it still operates, catching fire every now and then. A landfill does not need to be set on fire in order to burn. No manual intervention is needed to cause fires.

Landfills are a melting pot of domestic, industrial and medical wastes. Biodegradable waste, combined with other toxic chemicals, decompose, releasing heat in the process. This can cause flammable garbage to catch fire. The chemical reaction is spontaneous. The formation of methane during the decomposition further adds fuel to the fire, literally, while also polluting the environment.

Five, expedite the construction of the expressways bypassing the city. Trucks, being the largest contributors to vehicular pollution, need to have roads that allow them to maintain steady speeds to reduce emissions. The Eastern Peripheral Expressway, meant to open on 15 August, is yet to be thrown open.

Six, study the effects of fireworks on pollution. While nobody can deny that fireworks do cause pollution, the extent is yet to be ascertained. In its ruling that banned the sale of fireworks in NCR, the Supreme Court stated the following:

It cannot be said with any great degree of certainty that the extremely poor quality of air in Delhi in November and December 2016 was the result only of bursting fireworks around Diwali. Certainly, there were other causes as well, but even so, the contribution of the bursting of fireworks cannot be glossed over. Unfortunately, neither is it possible to give an accurate or relative assessment of the contribution of the other identified factors nor the contribution of bursting fireworks to the poor air quality in Delhi and in the NCR. Consequently, a complete ban on the sale of fireworks would be an extreme step that might not be fully warranted by the facts available to us.

If we are serious about solving the capital’s pollution crisis, then tackling the major causes first needs to be a priority. Depriving people of their brief annual schedules of merriment isn’t really going to help solve any problem when it doesn't contribute much to the pollutants in the air.

It is worth noting that fireworks during Deepavali are prevalent for only five days while the practice of burning crop stubble –  which is much larger in scale – takes place over several weeks. And the Delhi High Court’s order banning crop stubble burning last year resulted in a 40 per cent reduction in pollution levels.

If the apex court is serious about solving the pollution crisis, there needs to be a study on the actual effects of pollution.

Long-term measures are more likely to work rather than stop-gap ad hoc bans.