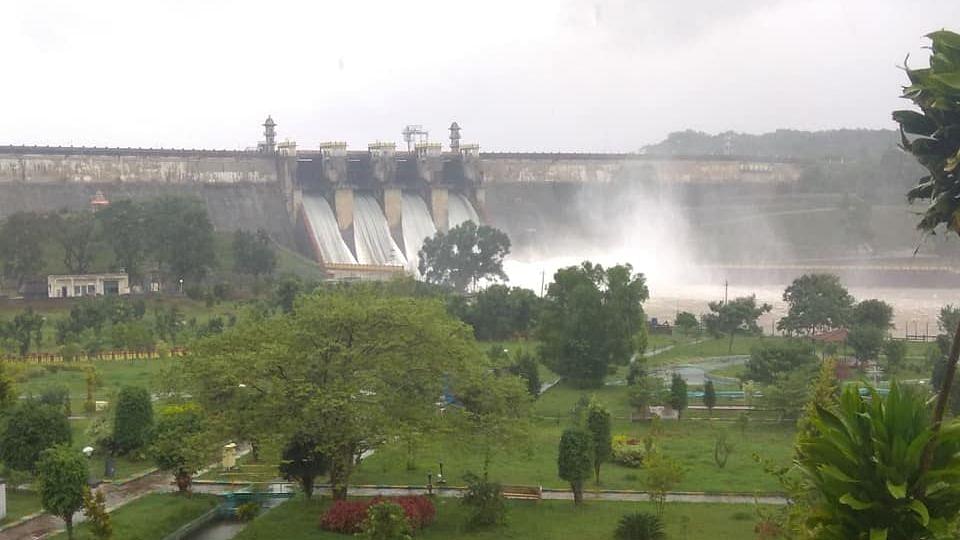 Even before Kodagu and the Western ghats could recover from the impact of nature’s fury of last year, this year’s monsoons have wreaked havoc yet again. Heavy rains have caused road blocks due to landslides and trees falling.

The district headquarters of the “Scotland of the East’ as Coorg was known, has reported that Madikeri has topped the national average of rains in 24 hours on Wednesday (24 hours ending at 2pm on 7 August 2019) with 194 mm of rainfall.

The district administration in Kodagu has sent a warning to the people on the Harangi river course to vacate the place as 30,000 cusecs of water will be let out from the Harangi dam.

The rising waters of Kaveri has also left the Bhagandeshwara temple partially submerged.

The Bethri bridge across the Kaveri is submerged.

A road in Hattihole has caved in due to heavy rains.

Kushalnagar is under water too.

And this trend will only continue with heavy rainfall predicted across districts like Dakshina Kannada, Udupi, Uttara Kannada, parts of Hassan and Chikkamgaluru and Shivamogga in the Malnad region (Hilly districts) up to Friday (9 August).

Excessive rains have washed away parts of the coastal roads. Deputy commissioners of three coastal districts — Sajit Babu in Kasargod, Sasikanth Senthil in Mangaluru, and Hepsibha Rani Korlapati in Udupi — have sent in advisories to close the schools and colleges till Friday.

The highways — mainly NH 66 and 75 — have developed cracks and potholes due to the rains. The Pune-Bengaluru National Highway, NH 4, has been cut off due to a huge crack opening up on the highway after very heavy rainfall in Kolhapur, Maharashtra.

The Kempu Holay river, which is a tributary of Nethravati river, had inundated NH 75 at Periyashanti and Udane, cutting off traffic.

For the first time, Sakleshpur, a town on the Western ghats, has been submerged. The local authorities are left with only one boat to rescue the people who are marooned. All through the Hemavati river course, housing colonies have been submerged.

According to the local RSS workers, about 400 people have been rescued with the help of the local police, fire crew and other relief workers. This the first time in the last 14 years that the Hemavathi river has flooded.

Similarly, down the hill, the Kukke Subrahmanya temple town has also got submerged due to heavy rains and flooding of the Kumaradhara river. About 120 houses in the surrounding areas have been affected. The Puttur-Subrahmanya road has also been cut off due to inundation.

The northern coast of Karnataka too has been struggling due to incessant rains. The district has been cut off from the Belagavi-Ankola road leaving over 600 trucks stranded on the flooded roads.

The police say that this flood has caused a 15 kilometre jam of trucks near Sankasaley in Ankola in Uttara Kannada. Many of these trucks are coming from Mumbai, Panaji and Gujarat state. The Gangavali river has also started swelling, which might further worsen the conditions on this road.

The Deputy Commissioner of Uttara Kannada, K Harish Kumar, has advised tourists against venturing out in the region. The Indian Coast Guard has been pressed into service to rescue stranded villagers at Karkundi village, near the Kirwatti bridge (Yellapura Taluk) on Thursday afternoon.

#KarnatakaFloods @IndiaCoastGuard Karnataka #HADR team engaged in rescuing people in distress and stranded at the flooded streets and home around Karkundi village near Kirwatti #Karnataka this afternoon @SpokespersonMoD pic.twitter.com/eQUnY1CYz8

Fresh landslides on the Sakleshpur-Subrahmanya Road ghat section of the Hassan-Mangaluru Railway line has forced the Railways to extend the cancellation of train services between Bengaluru and Mangaluru on Wednesday too, which, if the situation warrants, may be extended till Saturday.

Added to this, the Bengaluru-Kannur/Karwar-Bengaluru overnight services, which were operating via the diverted route going through Salem and Palakkad too were cancelled following the Southern Railway's inability to handle additional trains on the route at a time when several trains were being diverted/cancelled due to heavy rains across the region.

A communique from South-West Railways (SWR) said that the tri-weekly expresses, including the overnight express, plying between Mangaluru and Yeshwantpur were cancelled on Wednesday due to fresh landslides on the ghat stretch.

Divisional Railway Manager of SWR's Mysuru Division, Aparna Garg, who was camping at the affected ghat stretch, said fresh landslips, including one near a bridge and another between Siribagilu and Subrahmanya Road, have occurred since last night.

The Ghat Section Roads In Shambles

All the six ghat routes through Agumbe, Charmady, Shirady, Sampaje, Barebail and Bisale are experiencing very heavy rainfall, resulting in landslides and road cracks on many spots along the road connecting Bengaluru to Mangaluru.

The ghat roads connecting Dakshina Kannada and Chikkamagaluru districts that experienced heavy rains and resultant landslides were closed for traffic last week. Six kilometres of roads are still under ankle-level slush and driving on these roads has become a nightmare.

The district administrations of Dakshina Kannada and Chikkamagaluru have cleared the ghats for traffic but motorists had begun avoiding this ghat as the 6-8 kilometres of slushy roads on the Charmady-Annappa temple sector are very risky for motoring.

“I had taken my family to show them the splendour of Charmady ghat during the monsoons and the cascading waterfalls just everywhere en route to Malaya Maruta (a hill station) near Kottigehara. The pleasure trip became a nightmare as the car started swerving and skidding over the slushy road. It took me great effort to come out unscathed from this road on Monday,” said Ajay Shetty a motor enthusiast.

Engineers who visited the Charmady ghat stretch that experienced landslides are apprehensive that the loosened earth is likely to cause mud run-off from the hills and the slushy water might flow through the roads if the rains continue incessantly.

Officials warn that the Chikkamagaluru side of the Charmady ghats (12 kilometers) is normal for driving while the Dakshina Kannada part (18 kilometres), including the 10 hairpin bends are not yet conducive for motoring. With the Shirady ghat opening still a long way off and with the Bisale ghat also out of action, motorists who decide to use the Charmady sector will be taking a risk that they must be aware of.

According to Deputy Commissioner of Dakshina Kannada, Sasikanth Senthil, the relief machinery in case of flash floods and landslips have been kept in readiness and there would not be another occasion that will force the closure of the ghats entirely.  But the advisory on slow movement and the ban on heavy vehicles will stay for some more days, he points out.