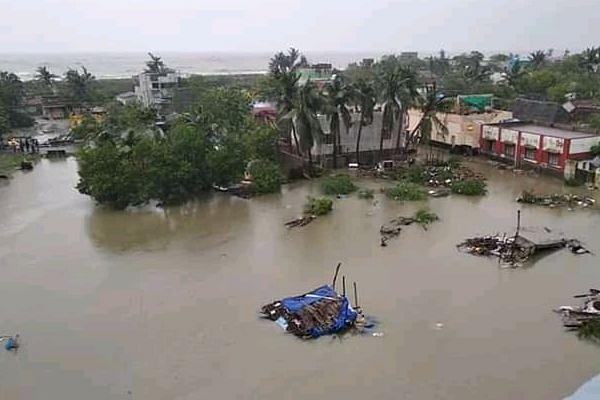 A village flooded by Cyclone Gaja downpour in Nagapattinam district.

Tamil Nadu had to face severe natural disasters in 2015 and 2016. In 2015, heavy rains across the state left many districts flooded and caused immense damage. Many parts of Chennai, Thiruvallur, Kanchipuram, and Cuddalore were inundated, and losses were estimated to be about Rs 20,000 crore.

Within a year, Chennai and its surroundings had to face another natural calamity. In December 2016, Cyclone Vardah landed in Chennai, killing 24 people. Losses were estimated at Rs 22,573 crore. The losses were heavy because the cyclone accompanied by heavy winds tore down the metropolitan city and its suburbs and ripped down many electrical posts.

However, compared with the death toll of 354 during the 2015 rains, mainly due to flooding, 24 people fell victim to Cyclone Vardah. As Cyclone Gaja headed towards Tamil Nadu last week, memories of Vardah haunted the people of the state.

The cyclone made a landfall at Cuddalore on 16 November and initial reports said it had wreaked damage in 11 districts, including Thanjavur, Nagapattinam, Thiruvarur and Pudukottai. A statement from the Tamil Nadu government says the cyclone has claimed 46 lives, while it has caused widespread destruction to homes and farms.

The government statement also said a few hundred cattle, 1,000-odd goats and nearly 15,000 poultry animals lost their lives. However, beyond these, Cyclone Gaja has caused colossal damage to agriculture, particularly in the delta districts. While water shortage hit the Cauvery delta last year, the cyclone wreaked havoc this year.

According to the Tamil Nadu government, paddy sown over 32,700 hectares across 12 districts, coconut trees grown in over 30,000 hectares, over 7,600 hectares of corn (maize) and over 10,000 hectares of various crops like banana, vegetables, mango, coffee, cotton and cashew nut have been damaged.

“It doesn’t matter if crops like paddy or maize are affected. We can always claim crop insurance. Plants like banana and coconut are not covered by insurance,” says V A Subramanian, an executive of the Tamil Nadu Banana Growers Association.

Banana and coconut seem to have been affected the worst, making it tougher for growers in the event of insurance not being available. “Those who have taken bank loans can expect some relief but not others,” says Subramanian.

Coconut growers, on the other hand, rue that their trees had to bear the brunt in Nagapattinam, Pudukottai and parts of Thanjavur, Thiruvarur and Tiruchi districts. All the trees that have been brought down by the cyclone are high nut-bearing trees. For example, coconut trees in Thanjavur, on an average, yield 18,372 nuts per hectare against the national average of 10,803. Yield in Thiruvarur is even higher at over 18,400 nuts.

The Tamil Nadu government said that it would pay Rs 1,100 per coconut tree - Rs 600 a relief and Rs 500 to cut and remove the tree. A grower will thus get Rs 1.95 lakh for a hectare based on the calculation that 175 trees can be planted per hectare. The growers will get an additional Rs 72,100 per hectare to replant coconut.

The state government has announced compensation ranging from Rs 13,500 per hectare for paddy to Rs 18,000 for cashew nut. Over 86,000 electrical posts have been uprooted and the electricity department is having a tough time restoring power supply to residents of districts like Thiruvarur and Thanjavur. “People are getting agitated over lack of electricity. Many are unable to draw water due to power cut,” said K Ramanathan, a farmer in Thoothukudi.

More than anything, the damage to the coconut and banana plants will have a nation-wide impact. Tamil Nadu accounts for over 25 per cent of coconut production in the country. According to the Coconut Development Board, Tamil Nadu tops the yield in the country, and produces 6.57 billion nuts of the total 23.90 billion produced in the country.

This could now see a rise in prices of coconut, tender coconut and copra. Hair oils may also now turn dearer. This is because over a tenth of the area under coconut cultivation has been damaged and its effect could be felt for another couple of years before the newly-planted one begin to bear nuts. Usually, it takes nearly five years for the coconut tree to start bearing.

More damage seems to have caused in the banana farms. The National Research Centre for Banana (NRCB) director Dr S Uma told Swarajya that banana plants bearing native varieties have been badly affected by Cyclone Gaja. “The damage will affect banana exports. Our native varieties are being exported and now chances for exports are dim,” she said.

The NRCB chief said her organisation has pegged the losses of banana plants at Rs 600 crore. The Tamil Nadu government has said that banana plants in over 11,000 acres have been destroyed. “The damage will hurt supply of banana in the next three to four months. Prices could rise since arrivals until Pongal (mid-January) could be affected,” said Subramanian.

The devastation of cyclone Gaja has resulted in some people in the districts resorting to protests, particularly against ministers. A political observer questioned the delay on the part of Tamil Nadu Chief Minister Edappadi K Palaniswami in visiting the flood-affected areas. Another observer said people were protesting in the streets within 24 hours of the cyclone wreaking havoc. “No doubt, the Tamil Nadu government had come up with good flood readiness measures. People should give the ministers and officers at least a couple of a days in addition to handle the crisis,” the observer said.

On the social media, the concern was over the mainstream media and the Chennai public, in general, which have been drawing ire. A social media user pointed out that while the rest of Tamil Nadu pitched in to help Chennai the moment Cyclone Vardah struck, a similar gesture had not been forthcoming from the metropolitan city.

“The damage in some parts has set us back by at least two decades. It will take time to get back to normal,” said C Rajendran, a farmer from Thiruvarur. A view that comes across from all, including officials handling the calamity, is that the damage caused by Cyclone Gaja looks to be more compared to Cyclone Vardah. Once the Tamil Nadu government, which has sought Rs 1,000 crore immediate relief from the Centre, sits down to work out the losses, the picture should be more clear.