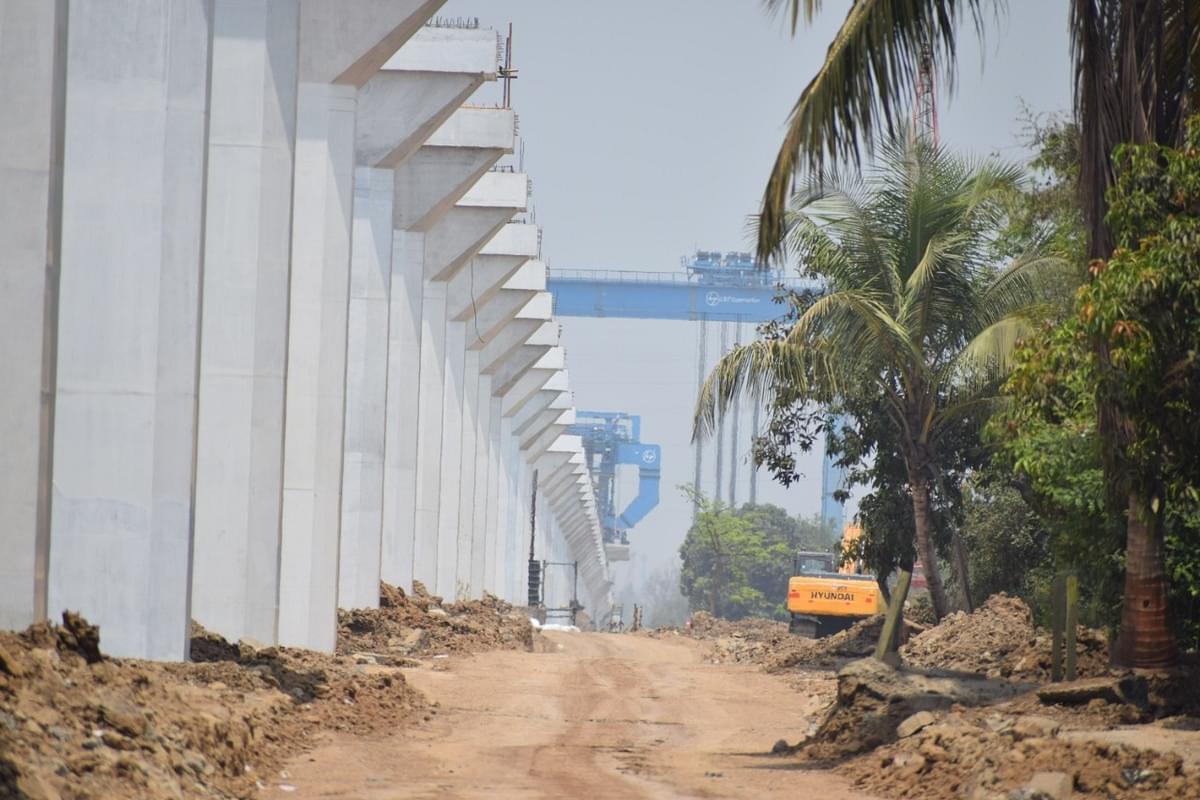 On 29 November 2019, a day after he took over as Chief Minister, Thackeray overturned Fadnavis's decision to build the car shed at Aarey. The government also declared the 804 acres of land in Aarey as a reserve forest. Since then, the project has been a major bone of contention between Shiv Sena and the Bharatiya Janata Party (BJP).

After coming back to power as Deputy Chief Minister on Thursday, Fadvanis asked the Urban Development Department to bring a proposal for building the car shed at Aarey before the cabinet. Fadnavis said that the 33-km long underground Metro project between Colaba-Bandra-SEEPZ hasn't moved forward due to a legal dispute over the Kanjurmarg plot, where the Thackeray-led regime wanted to build the car shed.

Fadnavis instructed officials to apprise the courts that the government could build the car shed at Aarey. According to reports, the decision to shift back the car shed to Aarey was backed by Chief Minister Shinde.

Like the Colaba-Bandra-SEEPZ line, there are multiple infrastructure projects which faced delays under the Maharashtra Vikas Aghadi (MVA) government and would need immediate attention from the new government in the state.

Here's a list of projects in Mumbai and Maharashtra that are likely to get a new lease of life or regain momentum under the new government.

The Mumbai-Ahmedabad High Speed Rail (MAHSR) is the only sanctioned high-speed rail project in the country. The ambitious high-speed railway network between two of the most developed cities in western India will pass through the 508-km-long network through Mumbai, Thane, and Palghar in Maharashtra and Valsad, Navsari, Surat, Bharuch, Vadodara, Anand, Kheda and Ahmedabad in Gujarat.

The project has hit a roadblock on the Maharashtra side due to land acquisition issues, but work is rapidly progressing on the Gujarat side of the project.

According to the Ministry of Railways, all statutory clearances relating to wildlife, the coastal regulation zone (CRZ), and forest clearance have been obtained for the project. Of the 1,396 hectares of land needed for the MAHSR project, 98.79 per cent of the land required in Gujarat has been acquired, while in neighbouring Maharashtra, the figure stands at 71.49 per cent. The central government has acquired 100 per cent of the 7.9 hectares of land required in the Union Territory of Dadra and Nagar Haveli.

Besides stonewalling the project by refusing to co-operate in land acquisition, the Thackeray-led dispensation also fuelled divisive rhetoric to oppose it.

At a political rally in Mumbai, Thackeray made a bizarre allegation that the Bullet Train project was being implemented to separate Mumbai from the rest of Maharashtra.

Thackeray further claimed that the Bullet Train Project was a ploy to break Mumbai. "What do they mean when they say they will make Mumbai independent? Is our country and Maharashtra under occupation?"

The MVA government also refused to hand over government land for the BKC underground station of the Bullet Train Project.

Another critical infrastructure project that the Fadnavis government accelerated, and is now delayed, is the 33.5-km Colaba-Bandra-SEEPZ Metro 3 Line. The first underground metro line in Mumbai, Metro 3 Line, will have 26 underground stations and is estimated to cost Rs 30,000 crore.

As per the initial plan, the first phase between Bandra and SEEPZ was planned to be completed by December 2021 and the second phase from Bandra-Kurla Complex to Colaba by June 2022, but Mumbai Metro Rail Corporation Limited (MMRCL), which is executing the project, announced recently that work on even the first phase of Metro corridor between Bandra-SEEPZ would be completed by January 2024.

The Fadnavis government had announced that the car shed for the Metro 3 Line will come up at Aarey Colony. Egged on by Aaditya Thackeray, the heir apparent of the Thackeray clan and cheered on by a motley bunch of South Mumbai elites, the MVA government scrapped the plan to build the shed at Aarey Colony, throwing the project into turmoil. It declared that the Metro shed would instead be shifted to Kanjurmarg. But the Kanjurmarg plot ran into multiple litigations and lawsuits, with even the central government being a party to the dispute.

The Mumbai Metropolitan Region Development Authority (MMRDA) is now exploring options other than Aarey and Kanjurmarg for the car shed.

The Ratnagiri Refinery and Petrochemical Limited, billed as Asia's 'biggest' oil refinery, was proposed to be built at Nanar village in Ratnagiri district in the coastal Konkan region. The project is planned as a joint venture between Indian Oil, Bharat Petroleum and Hindustan Petroleum, Saudi Arabia-owned Aramco and United Arab Emirates' National Oil Company.

The project was mooted by the Centre and the Maharashtra government in 2015 and aimed at bringing development to the backward Konkan region. It was estimated that the project would bring in investment to the tune of Rs 3 lakh crore, generate employment for at least one lakh local residents and process up to 60 million metric tonnes of crude oil per annum and to produce a range of refined petroleum products meeting BS-VI fuel efficiency norms.

The project was scrapped ahead of the 2019 assembly and Lok Sabha elections, as the Shiv Sena leaders believed the oil refinery would be detrimental to the Konkan's ecology and environment. Uddhav Thackeray himself led the resistance to the project. Thackeray even said he would not allow even "an inch of land" to be acquired for the project. His son, Aaditya Thackeray, also said that the Shiv Sena opposed the project as it would have had a detrimental impact on the environment and the "sons of the soil" were against it.

However, after assuming the office of CM, Thackeray recalibrated his position. He recently said that while the proposed oil refinery project would not come up at Nanar village, an alternative site was identified for the project.

Marathwada Water Grid Project was conceptualised and announced by the Fadnavis government in 2016. Estimated to cost Rs 25,000 crore, it envisions an integrated piped network connecting 11 dams in the parched Marathwada region to ensure a year-long water supply for drinking, irrigation and industrial purposes. The 11 dams that will be connected include Jayakwadi (Aurangabad), Yeldari (Parbhani), Siddheshwar (Hingoli), Majalgaon and Manjra (Beed), Lower Terna and Sina Kolegaon (Osmanabad), Dhanegaon (Latur), among others.

While the MVA government did not officially abandon the project, fearing a potential backlash, no progress has happened on the ground.

"When BJP was in power from 2014 to 2019 in the state, our government approved Water Grid Project. But Maha Vikas Aghadi government has stalled this project. Even good water conservation projects undertaken by us like Jalyukta Shivar and micro irrigation projects have been stopped." Fadnavis recently said while addressing Jal Akrosh Andolan in Aurangabad city. "Since MVA came to power, all people oriented-projects have been scrapped. Chief Minister Uddhav Thackeray's car is the only one which is running," he added.

The proposed Vadhavan Port, which will be India's 13th major port, has been planned by the Jawaharlal Nehru Port Trust (JNPT) as an 'All Weather, All Cargo' satellite port to enhance capabilities in handling deep-draft ships and larger vessels. With an increase in container shipping, the port, which will be close to the JNPT in Uran, Navi Mumbai, is also expected to handle the spillover in container vessel traffic at the Jawaharlal Nehru Port, which is India's top container port.

The port project, estimated to cost Rs 65,544.54 crore, is part of the Centre's Sagarmala initiative that aims to make Indian ports major contributors to the country's gross domestic product (GDP). The JNPT and the Maharashtra Maritime Board are development partners for the project.

Stressing on the ecological sensitivity of the area, a section of local population has opposed the construction of the port as it will not only hurt the flora and fauna of Dahanu, but will also disrupt allied activities like fishing and farming. Shiv Sena till recently was opposed to the project.

The government recently accorded 'In-Principle' approval of the site at Jaitapur in Maharashtra for setting up six nuclear power reactors of 1,650 MW each in technical cooperation with France which would make it the largest nuclear power generating site with a total capacity of 9,900 MW.

The project is proposed to be set up at Jaitapur site in Ratnagiri district of Maharashtra. But despite plant construction scheduled to start in late 2018, vehement opposition from local farmers and residents in the Konkan region for more than a decade grounded the project.

The Shiv Sena had slammed the Centre's approval. It stated that it firmly stood with the locals of the Konkan region who had been opposing the project for several years now. "The local population is dead against the project, which is hazardous and which will impact the entire Konkan coastline," said a local Sena MP.

Given the many challenges that these projects face, the new government faces an onerous task of bringing them back on track.