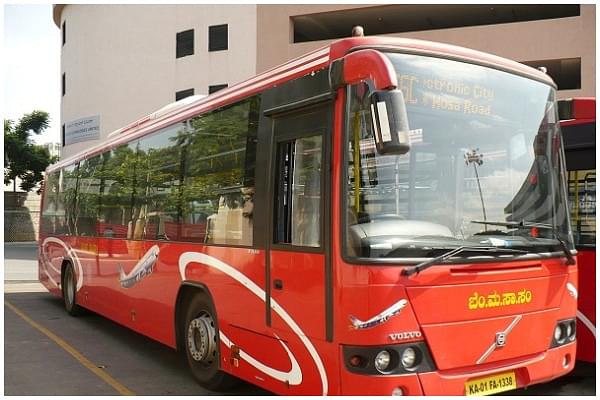 A Volvo bus in Bengaluru.

Bengaluru’s traffic has been a topic that has been under discussion for several years now. In 2015, information technology (IT) firms considered relocating their offices due to the congestion. Five years later, a report named Bengaluru as the ‘most traffic-congested’ city in the world.

The city’s severe traffic congestion has several causes from two-wheelers, to cabs to school buses.

However, what stands out is the role played by buses operated by the Bangalore Metropolitan Transport Corporation (BMTC).

The corporation, which enjoyed a near-monopoly for decades since inceptions has been hit by the onset of the Namma Metro as well as the mushrooming of ride-sharing and app-based cabs in the city. While data on cabs is not readily available, their number has gone down in the recent past. Conversely, the ridership on the metro has gone up steadily to 400,000 per day.

Now, a quick comparison with another city in India – in this case, Mumbai – would show that the Brihanmumbai Electricity Supply and Transport (BEST) undertaking, with a fleet of 3,500 buses has managed to touch a ridership of 34 lakh daily passengers.

Unlike BMTC, BEST never had a monopoly over Mumbai’s transport and always played second fiddle to the suburban rail network and more recently, the metro. While the two cities cannot be compared directly – Mumbai is linear and Bengaluru is radial – clearly, BMTC is doing something wrong.

BMTC’s route system has been rather consistent over the last few decades. It primarily operates buses from the city’s central business district (CBD) to the outskirts along the 10 arterial roads, much like a clock.

Along with this, it operates a few services along Inner Ring Road, Chord Road and Outer Ring Road in clockwise and anti-clockwise directions. While newer services including the Big10 series and the Metro Feeder services have been added over the last decade, the primary service type remains the same.

The city’s growth pattern, meanwhile, has shown three major concentrations of IT hubs – one at Electronics City in the south, one at Whitefield in the east and one along the eastern crescent of Outer Ring Road, a 23 km stretch of road that is constantly chock-a-block with traffic.

Correspondingly, the existence of the NICE Peripheral Ring Road (PRR) connecting to Electronics City has seen the rise of residential pockets in and around these areas. The same applies to other IT pockets as well.

Now given these developments, BMTC should logically be running short distance buses connecting these localities to one another, but sadly it does not.

Nearly every Volvo bus operated by the corporation from these localities starts at KBS and continues from the CBD to their destination. Not a very wise use of resources.

The first step that BMTC needs to take is to gather all available data on traffic and ridership patterns.

The easiest way to go about this would be to look at ticket sales using the electronic ticketing machines (ETMs) that it currently employs. These ETMs provide real-time data on which route sees maximum footfalls at which fare stages and times of the day.

For example: Let us look at a pair of routes – regular and air-conditioned Volvo – between KBS and Electronics City. Due to the prevailing fare difference, the regular bus will see more crowds within city limits during normal business times, while the Volvo would see more patronage closer to Electronics City at different times due to the staggered timings the IT industry has.

However, the catch is that this will only give an idea based on who uses the bus and not for those who use other modes of transport.

The next step would be to use data from the traffic police using its network of CCTV cameras across the city. This would give an idea as to which routes witness high loads and at what time and in which direction.

While this would give a general idea of the flow of traffic and not precise data, it would still give a greater perspective in conjunction with ticket data from ETMs.

The final and most crucial step would be to pick up data from third-party providers such as Google Maps and Uber Movement. While the former aggregates location data from Android phones to pinpoint traffic jams on the road (very similar to what the traffic camera footage would show), it would present more readable data.

The latter provides anonymised data from Uber’s trips across the region and would essentially provide BMTC with the ‘missing’ data, from those who do not take the bus.

Uber Movement was used by Mint to gauge the impact of the Namma Metro and Hyderabad Metro on the cities’ traffic conditions.

Anyone who has lived in suburban Bengaluru would understand that BMTC’s coverage of the city is abysmally low. The data obtained via the aforementioned methods would tend to corroborate that.

To give an example in south Bengaluru, there are numerous pockets between Hosur Road and Bannerghatta Road that have developed as housing clusters over the last decade, with a significant chunk of their residents working in the three IT clusters mentioned earlier.

However, these regions are hardly served by buses, and the few buses serving this region head to either KBS, KR Market or Shivajinagar and not to any of the IT corridors.

While both Hosur Road and Bannerghatta Road have metro corridors under construction, they will continue to remain underserved once these lines are made operational.

This is where data from multiple sources will come in handy. Google Maps will easily show major traffic congestion during morning and evening peak hours. Uber Movement will show a general direction that traffic is headed in. Combined with the lack of ETM ticket data, this is probably where BMTC will need to start work.

BMTC needs to change how it operates as an organisation. It no longer has a monopoly on the city’s public transport network and this needs to be kept in mind for future purposes.

For starters, as newer lines of the metro and eventually the suburban rail opens up, buses need to double up as proper feeder services. Buses should not act as direct competition to other modes of transport but rather complement them.

This is where BMTC needs to take a few lessons from its Mumbai counterpart BEST.

For starters, it needs to acquire minibuses that can navigate the narrow bylanes of the erstwhile villages that today form suburban Bengaluru. It can acquire air-conditioned ones and run them as non-stop conductor-less services connecting metro stations to localities in the vicinity.

Of course, BMTC would need to change its model of conductor-less buses – wherein the driver sells the tickets as opposed to the tickets being sold prior to boarding the bus. These non-stop services can either have select stops or pick up passengers to a metro station, where passengers buy their ticket on disembarking and drop passengers on the way back and sell them a ticket upfront.

With metro construction on in full swing, connectivity to future stations needs to be planned well, while existing stations must be served well too.

The Metro Feeder series is currently not doing its job well. In many cases, there are buses that cross more than two metro stations on the same line. Or even worse, route number MF14 connects the outskirts of the city along Mysore Road to KBS, crossing the Nayandahalli Metro Station en route.

The bus could have easily terminated at Nayandahalli itself, allowing passengers to board the metro there, rather than go all the way to KBS to meet the metro.

With some of the newer lines coming up parallel to the existing lines, BMTC should consider feeder routes to operational stations from localities that will soon be served by the metro. These routes should be planned in such a way that in the future, they can act as a link between two lines.

One user on an online forum called Skyscraper City made a very valid point that correlates with what has been said. He mentions that a significant chunk of those using their own vehicles would gladly shift to public transport if they had the option.

There are several localities such as Bellandur that are located more than 5 km from the main road and feature narrow roads that hinder sufficient bus connectivity. He adds that while long-distance users will migrate to the metro, short distance users might not due to the lack of last-mile connectivity.

As Cities Evolve, So Must Transit

BMTC hasn’t understood this properly. While the city grew, it merely started extending existing services to the outskirts. A bulk of the city’s workforce today no longer needs to travel to the CBD, rather they live and work completely in the outskirts and that needs to be addressed.

As for metro and rail connectivity, Bengaluru needs to take some inspiration from Mumbai and set up minibus stations near railway stations and demarcate proper bus bays under metro stations.

Bus stops that are otherwise located mid-way between two stations should be relocated closer to either one for basic, if not seamless connectivity.

The air-conditioned minibus model seems to have worked well in Mumbai, providing connectivity to both metro and suburban stations and this needs to be picked up by Bengaluru too, given narrow roads in many parts of the city.

Furthermore, BMTC also needs to change its method of operating conductor-less buses to prevent an overburdening of the driver.

In a short span of four months, BEST has launched over 60 new routes and Bengaluru must definitely aim for more given the absence of a rail network.

As far as funding is concerned, the BMTC has a slightly tough path to negotiate. Its operational losses in 2018-2019 went up to Rs 300 crore while running up a cumulative debt of Rs 1,000 crore.

The BMRCL in 2018 adopted an “innovative funding” model that sought funding for metro stations from major IT firms located in the vicinity.

BMRCL has also signed MoUs with firms such as Intel, Biocon, and others for other metro stations.

While approaching the same firms would seem unfair, BMTC could approach the myriad firms located along Outer Ring Road, Electronics City and Whitefield to sponsor buses in lieu of advertising rights or other incentives.

The public-private partnership seems to be a viable model as far as buses are concerned and Bengaluru must waste no time to plan for its future.

This piece was first published on India Infrahub and has been republished here with permission.