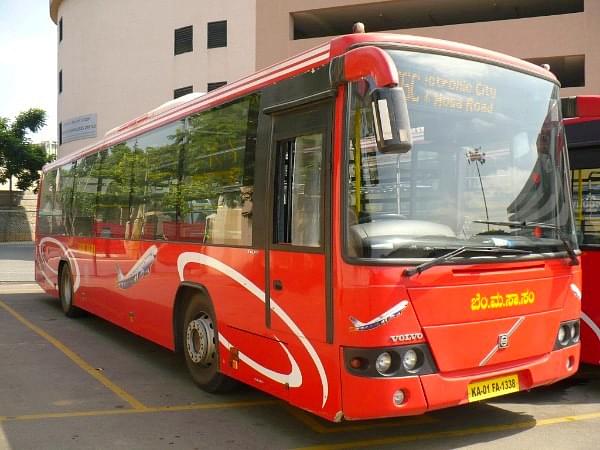 India’s Information Technology (IT) capital and Karnataka’s state capital Bengaluru has a traffic problem, and a serious one at that. The reason behind the traffic is quite simple – a combination of bad roads a poor public transport that led to a mushrooming of private vehicles. Bengaluru, much like Pune developed a two-wheeler culture which has now evolved into an unhealthy dependence on cabs.

The BMTC introduced its Intelligent Transport System (ITS) in 2016, with three main functions as part of it – electronic ticketing, vehicle tracking and public display of information.

As part of the ITS, the entire ticketing system of the BMTC got overhauled with new electronic ticketing machines (ETMs) being deployed. The existing ETMs could only print tickets and log the data of sales. The newer ones however, were to be compatible with smart cards – which BMTC is yet to introduce – relay live data on ticket sales as well as location data to the BMTC’s servers. The location of buses was then made available on BMTC’s mobile app while estimated time for arrivals (ETA) of buses on particular routes were displayed using digital screens at bus stations. Quite a straightforward arrangement, which nearly mirrored a World Bank funded project that was implemented in 2012 in Mysuru called MITRA (Mysore Intelligent TRAnsport).

However, the most important of the three here is the electronic ticketing; not because it makes things easier for the conductor or passenger, but because it results in a gold mine of data, that can go a long way in solving the city’s transport problems. When the Brihanmumbai Electricity Supply and Transport (BEST) undertaking in Mumbai went for electronic ticketing (including smart cards for bus passes and cashless travel), they made use of the ticket data to alter bus routes.

So how does ticket data help?

Ticketing data in-principle is used by transport corporations (transcos) to identify how many tickets were sold, how many passengers boarded, and what denomination tickets they purchased. In the older, punched ticket system used by BMTC, BEST and others, once tickets were sold, conductors would log the serial number of the ticket on top of the bundle at fixed intervals. The difference in serial numbers would indicate the number of tickets sold. However, data such which stage the passenger travelled would be unavailable. Two passengers travelling the same distance but at different points would pay the same.

E-ticketing solves that issue to a great extent. It logs the bus stop where the passenger boarded and disembarked, how many passengers travelled on which stage and more. Further, with smart cards, even passes can be tracked, thus giving the operator a clearer picture of the total passenger count.

Now, how does one apply this data to daily bus operations?

Using the data at hand, aggregated over a period of time, BMTC can understand when and where it sees patronage.

For example, route 365 goes from Kempegowda Bus Station (KBS) to Bannerghatta National Park (BNP) via Shanthinagar, Dairy Circle, from whereon it continues along Bannerghatta Road. Now, if ticket data tells BMTC that during morning rush hours, the maximum crowd on the route is between Shanthinagar bus station and Dairy Circle and simultaneously between Arekere Gate and Jayadeva Hospital, and shows that the maximum crowd in the middle of the afternoon if between Dairy Circle and J P Nagar, it is armed with new potential routes. It can choose to look at the corresponding data from other routes in the vicinity.

Armed with this data, BMTC can commission a new route, one that doesn’t go to either BNP or KBS but serves the population in between the two. If the data from routes around these high-density areas is looked at, and passengers are found to be going in another direction – say towards Central Silk Board from Jayadeva Hospital – it can launch a new route that goes towards or beyond Silk Board on an experimental basis. Again, ticket data from the new route will help BMTC establish whether this is what passengers want or not.

In the event, passenger movement is distributed evenly across the route, but is low, the BMTC can then consider operating mini or midi buses.

However, there is a major shortcoming in ticketing data. It works only if BMTC has buses operating in specific areas.

Now, if we look at Bengaluru as a city, it is a radial city where transport originates from the city’s centre – KBS, Krishnarajendra Market and Shivajinagar – and goes out in different directions.Again, if we take Bannerghatta Road as an example, we see that it is a major arterial road heading southward, that has several small and medium-scale IT hubs present along with other commercial establishments and residential units. However, a bulk of the residential establishments are located off the road, mostly in the range of 2-3 km inside.

One such locality is Shantiniketan Layout behind Arakere lake. The area is connected by no more than five buses, heading towards K R Market, or KBS, via Bannerghatta Road. This, is where the third party data comes in.

Third party data can include data from Uber Movement, which provides anonymous data based on Uber’s rides in cities where it operates. Uber Movement was recently used to determine if metro rail projects in Hyderabad and Bengaluru helped reduce road traffic. After this, there is the ever popular Google Maps, which is the platform that ride-sharing giants including Uber and Ola are built upon. Google Maps gathers location data from Android phones and plots it on a map to show traffic levels (green indicates low traffic and maroon shows extreme congestion). The third source of data is the traffic camera footage from closed circuit television (CCTV) cameras that the Bengaluru Traffic Police (BTP) uses.

Coming back to Shantiniketan layout. A look at Google Maps during rush hours would show moderate to heavy traffic away from Bannerghatta Road. While indirectly, this could mean the road is bad or there has been an accident, the direct inference is simple – there are too many vehicles on the road. Now, with BMTC hardly running buses in the area, what are all these vehicles? Uber Movement, which literally shows where Uber rides go would show a high density of its own vehicles in the region. Traffic camera footage would show vehicles – especially cabs – turning into Shantiniketan layout.

Tracking the data further, would indicate that vehicles go to the end of Shantiniketan Layout to reach Vijaya Bank Layout and then take Begur Road to reach Hosur Road, thus avoiding the dreaded Silk Board junction on their way to East and Southeast Bengaluru.

Now, apart from data, a visit to the area would indicate that the roads there are narrow and this the BMTC could not possibly run a regular bus there.

However, as in the earlier case – using only BMTC data – BMTC could use Minibuses or Midibuses in regions that have narrow roads, or set up mid-way transit points where passengers could change buses.

The data available is a gold mine, quite literally and can be used to make the city a better one. It can also be commercialised similar to what Indian Railways does. However, it remains to be seen what the administration does with it.