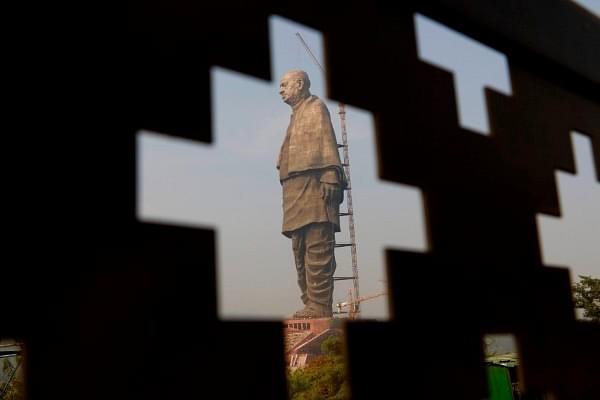 The site of the Statue of Unity near Sardar Sarovar Dam. (Siddharaj Solanki/Hindustan Times via GettyImages)

When Narendra Modi, then the chief minister of Gujarat, unveiled a grandiose plan to build a large statue of Sardar Vallabhbhai Patel — India’s lauh purush (Iron Man) — ahead of the civic elections in Ahmedabad in 2010, it was considered a pre-election sop. However, nearly eight years later, the statue stands tall with a towering height of 182-metre (597-feet).

Rising amid the foothills of the Satpura and Vindhyachal ranges, the statue is a dominating feature in the picturesque environs of the holy Narmada river. Only when one stands below the statue, the enormity of the structure strikes. To gauge the structure’s enormity, consider these statistics: it is over three times the height of Christ the Redeemer in Rio Dio Janerio, twice the size of Statue of Liberty in New York and nearly 77 feet taller than China’s Spring Temple Buddha statue. When Modi unveils the statue later today, on the 143rd birth anniversary of Patel, it will become the world’s tallest.

Built at a cost of over Rs 3,050 crore by an army of over 3,000 workers, including 300 engineers from Larsen & Toubro, in little over 40 months (work started in May 2015), the statue is a sheer marvel of engineering. In comparison, it took China, known for building infrastructure at lightning speed, over 11 years to build the Spring Temple Buddha statue, which is the highest in the world, for now.

The statue has been designed by a team lead by 93-year-old sculptor Ram V Sutar. Designers of the statue faced two major challenges. One, the Statue of Unity was to be designed based on a real-life photograph of Sardar Patel in dhoti and jacket, unlike the statues of Buddha and Christ, which are imagined depictions covered in robes. In short, the designers of the Statue of Unity had to capture more details than the makers of other comparable structures. Two, in a survey, 15 major Indian bronze foundries were found incapable of executing a project of this size.

To make sure the statue’s face resembles Patel’s facial features, around 2,000 photographs of the leader from archives were studied. To get his posture right, the group working on the statue chose a picture of Patel taken in 1949, arguably one of the most strenuous years of his life.

Using these pictures, Sutar built an 18 feet bronze statue of Patel. Once built, the statue was taken to his birthplace in the town of Karamsad in Gujarat's Anand district to observe the reaction of the people, including those who had seen him alive. Using the feedback, Sutar built another statue, this time 30 feet tall. After the design was finalised, a full-size digital model of the statue was prepared. Sutar then went to China along with the officials of Sardar Sarovar Narmada Nigam Limited, a Gujarat government owned firm which operates the Sardar Sarovar Dam, to get intricate bronze cladding, which could not be made in India.

World's largest foundry — the China-based Jiangxi Toqine Metal Crafts Corporation, was tasked with building these cladding, required to give the statue final shape. The sculptor had to visit China four times before the company could move ahead with the production of around 7,000 bronze plates of various sizes, which were welded together at the site of the statue. Techniques such as 3D scanning and computer numerical control production were used for accurate reproduction of minute details. After solving the jigsaw puzzle with oxyacetylene flame (that is, matching and welding), the number of cladding came down to 550. These were affixed onto the structure to give it the final shape.

Part of the statue enclosed inside the 8mm bronze cladding is a two-layered structure. The innermost layer has two 127-metre-high towers made of reinforced cement concrete. These towers rise up to the chest area. The steel frame between the towers and the cladding forms the second layer.

There were multiple engineering challenges too.

One, unlike the Statue of Liberty and Christ the Redeemer, the Statue of Unity does not have a wider base. A wider base is required to make a structure stable. As Patel wore a dhoti, the statue is thicker towards the top and thinner at the bottom. This challenge was overcome by keeping the slenderness ratio between the width of the statue and its height to 16:19 — significantly higher than the 8:14 ratio rule that is followed in the construction of high-rise structures.

Two, the base of the statue, below the dhoti-clad legs, is about 25 metres high, equivalent to an eight-storey building. This part of the structure houses two massive lifts, which can carry over 25 people to a 135-metre high gallery in just above half a minute. Fitting these vibration-causing machines inside the statue’s two vertical cores, the first of its three layers, was a challenge for the engineers.

Three, engineers had to factor in the speed of wind, and the possibility of earthquakes and flood. Being built on an island in the middle of Narmada, the statue will have to face the tunnel effect of winds blowing down the river. The walking pose of the statue opened up a gap of 6.4 metres between the two feet. To deal with these issues, the cladding used in the statue has overlapping panels, which allow it to move vertically and horizontally, to resist earthquake and wind forces. Two 250-tonne mass dampers, which are installed in structures to reduce the amplitude of vibrations, have been used. As a result, the statue is capable of withstanding wind blowing at almost 220 km per hour and surviving earthquakes measuring up to 6.5 on the Richter Scale.

Four, the statue’s location amidst remote, mountainous terrain made transportation of equipment and material difficult. To make the movement to the island easier, the engineers banked on the fact that the island remains accessible from one side of the river via land for at least eight months post monsoon as water in the channel recedes. A rock bridge was built over shallow water and a temporary Bailey bridge was constructed for the monsoon, when there is more water in the river. Over 210,000 cubic metres of cement concrete, 18,500 tonnes of reinforced steel, 6,500 tonnes of structural steel, 1,700 tonnes of bronze, and around 1,850 tonnes of bronze cladding, made up of some 565 macro and 6,000 micro panels, were used to build the statue. Most of this material was moved using the two bridges.

How these feats were achieved in a little over three years is a story of grit and resilience of those working on the project. Perhaps, that is why the statue is a fitting tribute to the man who, through untiring efforts, weaved the warp and weft of unity and shaped independent India.

Also Read: Why The Shivaji Statue Must Rise